The mood of Macworld Expo 2010 was vigorous and crowds were larger than expected, despite the lack of many new products – the kind that usually compel attendees to spread the word and seek out a company’s booth. Most of the offerings were existing versions or incremental updates to products already familiar to us.

Many of those products that were new weren’t yet released, such as DocMoto, a full-featured document management system that may prove highly attractive to design businesses, architectural offices, legal firms, and any other organization that creates numerous document-based projects. We would have bought some things on the spot if they were available, such as the stylish and functional iKit AutoCharge Dual USB Car Charger.

Still, among the few new things that were shipping, those that are still forthcoming, and existing products we weren’t yet familiar with, we found some that merit attention.

Kanex HDMI connector for iMac — When Jeff pointed out Kanex’s latest offering, it took a few tries before Adam saw just what he was gesturing at. The Kanex XD is a little gray box that takes advantage of the Mini DisplayPort connection on the back of the 27-inch iMac and lets you hook up a Blu-ray player, PlayStation 3, Xbox, or other HD devices and use the iMac as an HDTV. (This feature is available only on the 27-inch iMac model.) The Kanex XD also makes it possible to connect computers using DVI video output to Apple’s 24-inch LED Cinema Display. The Kanex XD costs $149.99 and is expected to be available in April 2010.

FastTrac — It takes some level of obsession to be a programmer, but the folks at Juicy Development have taken their obsessions to a new level with FastTrac. The iPhone app attempts to optimize your visit to Disneyland by cutting the time you spend waiting in line for the park’s attractions. Using years of data about rides, crowds, holidays, and maintenance schedules (culled by Disney veterans and fans, since Disney itself doesn’t release such data), FastTrac plots an optimized schedule of the rides you want to hit. It can take unexpected ride closures into account, knowing the average repair time of each ride, and generate new
schedules within the park. According to Juicy Development, testing during the busy spring break yielded 27 rides at Disneyland, more than double the typical 12 rides. The company is working on adding restaurant information to the app, as well as support for Disney’s California Adventure, Walt Disney World, and SeaWorld parks. FastTrac is available from the App Store for $4.99. 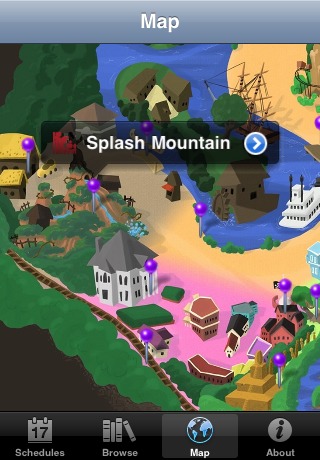 iPhone Gloves — Although Californians at Macworld Expo were scratching their heads, attendees arriving from colder climates were excited about several offerings of gloves that can be used with the iPhone and iPod touch. Dots Gloves and Telefingers showed off their warm wares, but iTouch Gloves impressed us (and lots of attendees) with their capacitive-leather gloves that don’t rely on active fingertip areas to work. A patented TouchTec process makes it possible to swipe a touchscreen using any part of the glove. iTouch’s offerings sell for between $99 and $195, and they look good, too. We’re
still trying to figure out how they make capacitive leather… do they start with capacitive cows? (In South Korea, sausages are substituted.)

U-Socket — We’re all tired of power bricks, even smaller ones. If FastMac has its way, we’ll be able to charge many devices with just a cable. The company’s U-Socket is a new kind of dual-socket 110 volt power outlet you can swap out for any standard one in your home – or, in an ideal world, in every airport and hotel in which you stay and need power. The U-Socket adds two powered USB ports offset vertically and horizontally between the two AC jacks. The USB ports draw energy only when a device like an iPhone or iPod is plugged in. The U-Socket costs $19.95 and is currently awaiting UL approval before shipping in the first quarter of
2010. 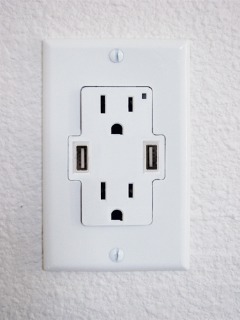 Trexta iPhone Case — Looking for an iPhone case that you can really customize? Instead of waiting for a manufacturer to come up with something you like, simply grab some pens and draw yours. Trexta showed off a line of iPhone cases covered in drawing paper, ready for your own doodles and other creations. They come in packs of five, but as far as we can see, they aren’t yet available for purchase. Trexta doesn’t yet have photos posted, but GeekSugar has plenty.

Personal Scanners Everywhere — Looking to create the paperless office? You’ll need a scanner of some sort, and three different exhibitors had scanners to show off. Fujitsu debuted the $295 ScanSnap S1300, which provides multi-page, double-sided, color scanning in a mobile device that can even operate from USB bus power. Just two booths away, The Neat Company was demoing their Neat scanners and associated software.

And Apparent, makers of the IntelliScanner barcode readers, introduced the $129 Doxie, a svelte mobile scanner with a “feminine” character hammered home by the pink hearts on the case; it comes with six “skins” – alternate stickers – if you’re not a teenage girl. Similarly, if you can’t stomach clicking a big heart button in the software to scan, an “International Business” theme will bring the interface back to earth. Along with support for local applications, Doxie’s software can also send scans to Google Docs, Scribd, Backpack, Flickr, Evernote, and other Internet-based services. Our only question – did Apparent ever look up the meaning of “doxie?”

Pulse Smartpen — If you’re a student or a journalist, you spend much of your life taking notes, and the Pulse smartpen from Livescribe could be a boon. Bringing new meaning to the word “convergence,” the Pulse smartpen records audio as you take notes on special paper, enabling both the transfer of notes to a special application and time-syncing of the notes to the audio. Adam was on the interviewee side of the equation during the show, and it was seamless for the Brazilian journalist asking the questions to take notes in normal ink while recording everything Adam said for future reference. Prices range from $149.95 to $249.95 depending on storage
capacity.

Canson Papershow — Working along much the same lines as Livescribe’s Pulse smartpen was Canson’s Papershow, a $199.99 kit composed of a camera-equipped Bluetooth pen, special paper, and software (both Mac and Windows) that transfers everything written on the paper to appear on a computer screen. It would be ideal, for instance, for annotating the slides in a presentation in real time. Annotated slides can be printed or exported as PDF, so meeting attendees can focus on the presentation rather than on taking their own notes.

ScreenGuardz Privacy — Having an iPhone handy is great for accessing all of your important information whenever you want, but often you’re doing so in public. If you’d rather not reveal the email message you’re composing to the person next to you on the bus, consider applying a ScreenGuardz Privacy screen cover. The protective film for the iPhone 3G or 3GS limits viewing from four angles, which means you can switch between horizontal and vertical positions; typical two-way privacy film makes one position difficult to view. The ScreenGuardz Privacy film includes one protector and costs $19.95.

Microvision ShowWX Laser Pico Projector — Imagine a small device, about the size of an iPhone, capable of projecting high resolution video as large as a 100-inch television set. The Microvision ShowWX projector uses scanning lasers to project colorful images on any surface. By using laser projection instead of alternative technologies like LCDs, the images are always in focus with a wider color range than other pico (extremely small) projectors. The projector includes a number of connectivity options, including an iPhone/iPod cable, and runs between 90-120 minutes on battery. It’s not hard to imagine the day when these are included in our mobile devices,
although the lack of flat, white surfaces in the world might be a little limiting. It’s due in March 2010.