In contrast to the absence of most of the larger Mac software developers at this year’s Macworld 2010 Conference and Expo, Microsoft had a booth on the show floor and briefed us regarding their plans for Microsoft Office for Mac 2011, due by the end of 2010.

Microsoft has a different software release model than several of its competitors that we Mac users pay attention to. At one extreme, Google often makes major changes to its Web and desktop applications with no advance notice, no choice, no fanfare, and minimal documentation. Google Buzz, a Twitter-like instant-messaging adjunct to Gmail, is a recent example of such a change (see “What’s the Google Buzz? Tell Me What’s A-Happening,” 14 February 2010).

In the middle ground is Apple, which offers its users a choice about whether or not to install an update, and pre-announces major upgrades, such as new releases of Mac OS X, without all the details revealed. Other large changes, such new versions of iLife and Aperture, may appear without warning. Smaller updates arrive via Software Update with no notice and relatively little explanation.

At the far end is Microsoft, which sees its primary Office customers as huge corporations with tens of thousands of computers, not individual users. For the most part, those large customers want what Google and Apple do not provide: detailed information about what’s coming and when it will arrive. This curiosity is warranted by a need to plan how to deploy the update, and train employees to use the new software.

Microsoft does sometimes update Office via an update mechanism similar to Apple’s Software Update, but those updates are typically for compatibility, reliability, or security – not to add new features that a typical user would notice. When Microsoft prepares a new version of Office it generally provides a lot of advance notice and puts effort into documenting changes, especially changes that a larger organization would care about.

During our media briefing it didn’t surprise me to learn that – as announced in August 2009 – Microsoft still plans to replace Entourage with Outlook in Office 2011 (covered in “Outlook for Mac Due with 2010 Office Release,” 13 August 2009). Microsoft also still intends to restore Visual Basic for Applications (VBA) to the Office suite, after having removed it from Office 2008 because of difficulties in making it compatible with Intel-based Macs (see “Microsoft Fixes Office 2008 Bugs, Announces VBA Return,” 19 May 2008). The new version will have the advantage of greater compatibility with the Windows version of VBA than was available in
Office 2004, leading one snarky friend at the show to comment that we’ll once again have to worry about VBA macro viruses from Windows users.

Microsoft continues to struggle with helping users find the many available features in Microsoft Word (hint: choose Tools > Customize and explore the Customize dialog). This time around, the Macintosh Business Unit (MacBU) will try the Ribbon approach introduced in recent versions of Word for Windows.

Many Windows users find the Ribbon distracting. However, if left enabled, it appears below the toolbar region in a document window and works much like the Formatting palette in Word 2008, providing controls based on what you are doing or have selected in the document below. Your toolbars and the Ribbon automatically fit themselves into the top of the window, so you don’t have to arrange them independently on your screen. Regrettably, I forgot to ask if you’ll be able to move the toolbars or Ribbon to the side of the window, something that might be particularly welcome when working on a laptop.

Office 2011 will also have collaborative capabilities along the lines of Google Docs, which will allow more than one user to edit a document at the same time. While editing, each user sees which other users are active in the document. In Word, the system uses a “paragraph lock,” so that only one user may edit a given paragraph. Microsoft said that the documents would sync every 30 seconds.

This feature will require using the .docx format introduced with Word 2008 for Mac, and either a SharePoint server or the SkyDrive service to host the shared document. The Internet-hosted SkyDrive service, comparable to Dropbox or the iDisk feature of MobileMe, provides 25 GB of storage space at no cost, enabling organizations without SharePoint to take advantage of collaborative editing. Although this collaboration option should work with Excel and PowerPoint, Microsoft didn’t share any specifics.

Although Microsoft didn’t discuss new changes in Excel or PowerPoint, the company representatives did talk about the new Outlook email and personal information management client. In a major change from Entourage, it will store email messages as individual files instead of in a single database file, which enables Time Machine to back up email messages without wasting space and Spotlight to index messages individually. The new Outlook will also import .pst files, making it possible to bring in email messages from the Windows version of Outlook.

Another new Office feature that may interest larger organizations is Information Rights Management (IRM), which makes it possible to specify what a recipient can do with an Office document or message. For instance, a recipient might not be allowed to copy or forward a message containing confidential business plans, or print a spreadsheet containing account numbers.

Microsoft did not provide pricing details, but said that Office 2011 will be available in time for the 2010 holiday shopping season.

With companies like Adobe, Quark, and FileMaker sitting out Macworld Expo, it was noteworthy that Microsoft supported the Mac community by showing up, setting up a booth (with a fun pictorial history of Office), and offering a look at what’s to come well in advance of Office 2011’s release.

And in an indication that Microsoft’s MacBU doesn’t take themselves too seriously, it had marketing people dress up in huge costumes representing the four Office application icons, an act deserving special recognition given that the mascots couldn’t see well enough to walk through the crowded show without helpers leading them by the hand. 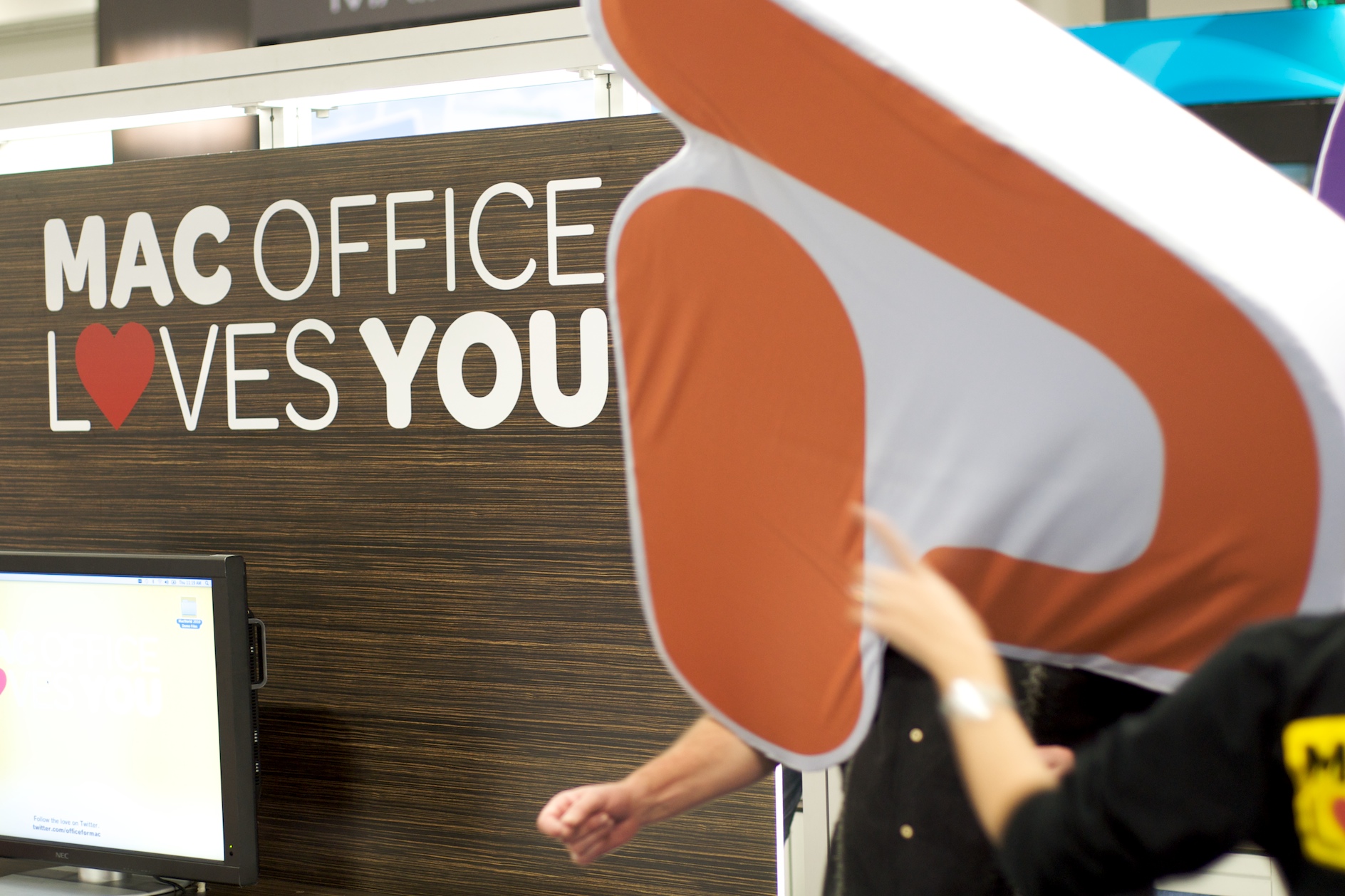