The long-rumored Skype client for Verizon will be available for that firm’s smartphones in March 2010. But it’s not quite the Skype we’re used to: the client will work only over 3G, not Wi-Fi – the opposite of Skype for iPhone, which currently works only over Wi-Fi. The Verizon client also won’t call regular phone numbers in the United States, instead connecting only Skype users to other Skype users. Skype has over half a billion users worldwide, and Verizon has over 90 million subscribers. The Skype client is integrated with the smartphone address book for simpler calling.

The free software does allow Skype-to-Skype calls worldwide over 3G, but Skype Out calls to the public switched telephone network may be made only to numbers outside the United States. This cuts into the atrociously high rates that Verizon and other carriers collect for international calling, but also doesn’t let you substitute data calls for consuming minutes from your domestic plan. 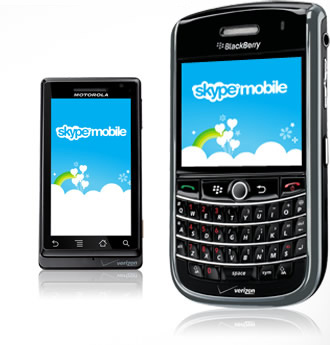 It’s unclear at this writing whether Skype In numbers, regular phone numbers linked to a Skype account, will be routed to a Verizon smartphone with the client.

You can also use the client to send and receive instant messages and see the Skype status of those other Skype users who allow you to see their status.

The free Skype for iPhone software currently offers only calling over Wi-Fi, but to any phone number, not just other Skype users. The iPhone app also allows SMS messages, as well as Skype messaging. Apple and AT&T agreed in 2009 to allow voice calls over 3G, and both firms updated agreements to allow this.

However, the upcoming iPhone OS 3.2 is reportedly required to enable VoIP over 3G. Skype recently explained that it plans a revised version of its iPhone app after the 3.2 update ships but only when it is satisfied with voice quality.