A call came through to my iPhone from an unknown 866 number while I was in a meeting, so I ignored it. But when I checked voicemail later, the automated message claimed to be from Citibank, with whom we have several credit cards, and said I should call a particular number to talk with them about a potential fraud warning. I have a firm policy never to call such numbers, since there’s no way to verify that the people on the other end aren’t scammers, but when I called the customer service number on the back of my credit card, the representative confirmed the automated call.

Oddly, the charge which Citibank was worried about was for $1.00 exactly, and it had been charged by MobileMe. Tonya and I both confirmed that we hadn’t ordered anything recently via iTunes by logging into our accounts (besides, I’ve never seen iTunes charge $1.00 exactly for anything) or from the Apple Store (check the Apple Store Order Status page for Apple Store orders, and the Apple Internet Services Order Status page for iPhoto orders), and neither of us has ever purchased additional storage from MobileMe. But it’s entirely likely that we could have ordered something from Apple, so I let the Citibank people put our
card on hold while I investigated further.

Logging in to my MobileMe account revealed nothing unusual, so I clicked Contact Support, then Account & Billing and then Renew & Reactivate, since that was as close as I could see to information about billing problems. Nothing there looked helpful, but the page offered me a chance to chat with a MobileMe Advisor, so I clicked the Chat Now button. 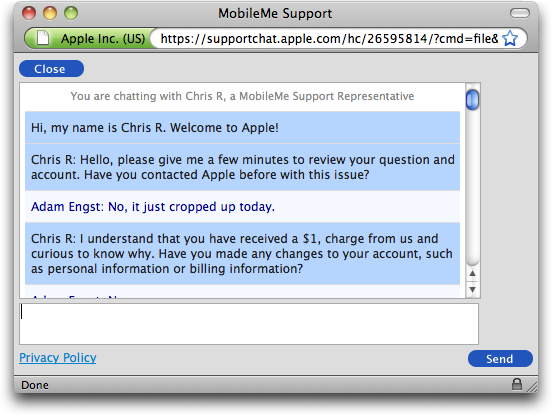 The support rep asked reasonable questions, the key one of which was if I had other MobileMe accounts. Since Tonya’s account is also associated with that card, I said yes, and he asked if either of us had made changes to our accounts recently, such as personal or billing information. Neither of us had, and he admitted to being stumped, but explained that Apple normally uses a $1.00 charge as a preauthorization charge to verify that a stored credit card number is still good.

When I asked what the preauthorization would be for, since we weren’t buying anything, he explained further that it could happen any time personal or billing information changed, or when an account is created or renewed. Since we had renewed our accounts by buying less-expensive MobileMe boxes from Amazon (a known trick for paying less than $99 for a year of MobileMe service – you’ll currently save $30), he didn’t see why a preauthorization should have occurred.

But then came the light bulb, since Tonya noted from the other room that her MobileMe account was set to renew automatically in April 2010, something that I had turned off for my account. When I mentioned that to the support rep, he apologized profusely for not noticing that fact, since it explained everything.

In essence, roughly a month before automatic renewal, Apple charges your credit card $1.00 to verify that it’s still good, and 3 to 5 business days later, refunds the money to your card. So most people don’t even see the charge. It was only because Citibank’s fraud warning system noticed that we were alerted. This makes perfect sense from Apple’s perspective, since if the preauthorization charge fails, there’s some time for the user to switch to a different card before the renewal date arrives. Otherwise, if Apple cut off access without warning due to a card failing, the user would likely be unhappy about losing access to email and other MobileMe services.

A friend on Facebook said that Citibank had actually denied his WWDC registration fee a few years in a row because Apple did the same thing – charging $1.00 to verify the card, followed by a large charge for the conference registration.

That sort of behavior isn’t uncommon for credit card thieves, who try a small, innocuous charge that many people won’t notice on their statements, after which they know they can abuse the card more fully. In fact, the last time we experienced a similar problem, it was a touch embarrassing, since we saw a $19.95 charge for Yahoo on our credit card bill, and couldn’t figure it out (it turned out that our card number had been stolen). But when Tonya called, the credit card rep told her that it was actually for Yahoo Personals, and asked if perhaps I had made the charge without saying anything. Yeesh!

Meanwhile, back at this MobileMe charge, since it was entirely legitimate, I called Citibank again to explain and remove the hold on the card. It was a wasted hour out of my day, but I appreciated the decent customer service experiences with both Citibank and Apple. And more important, I learned something I didn’t know before, and it’s something that could help reduce confusion for other Mac users who see unusual $1.00 charges from Apple.

Comments About What Is that $1 MobileMe Charge from Apple?