I was struck by two recent cartoons that echo a common frustration with digital rights managed media: it’s so hard to use the clumsy, purposely frustrating interfaces that it’s easier to download and play a pirated version of media for which you have legitimate access.

First, Geekologie outlined in PowerPoint-like form the way in which the marketing and copyright geniuses at movie studios have ruined the experience of getting to a movie once you’ve inserted a DVD into a player.

There have been discs I’ve accessed lately that I wanted to put into the microwave oven after spending multiple minutes just getting to the point where I could actually watch the main feature. There’s no reason for all this: the FBI, Interpol, and other warnings obviously don’t ever stop anyone from any activity, but they are de rigueur irritations. Increasingly, unskippable trailers market to us just like we’re bombarded at movie theaters.

The alternative? Stick a ripped-and-burned disc into a drive – or open a ripped file – and watch the film sans preludes. 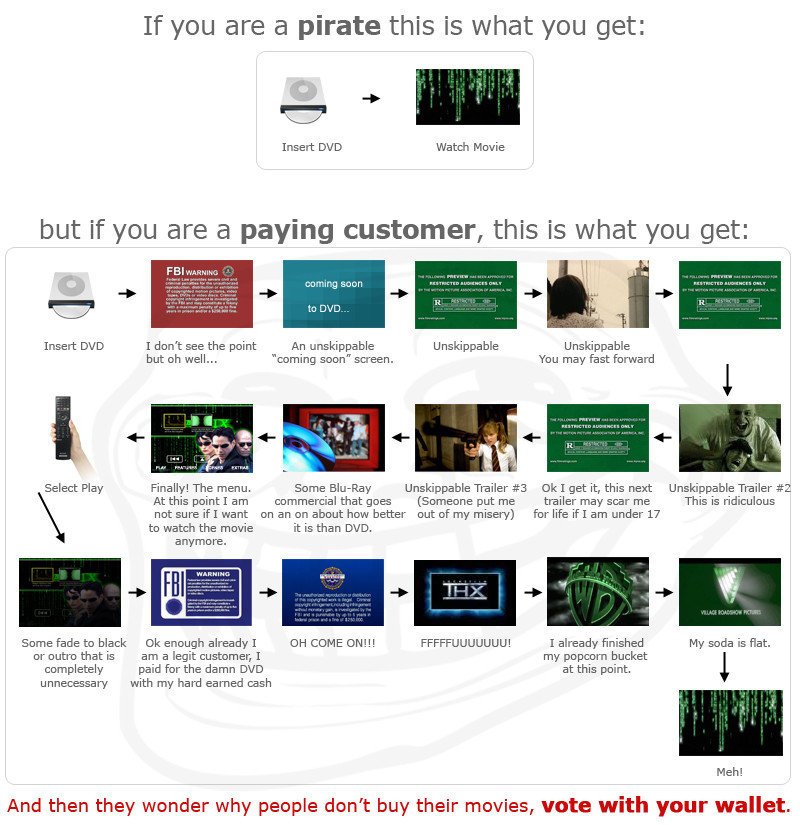 The second cartoon, from the super-geeky Web designer duo The Brads (Brad Colbow and Brad Dielman), hits close to our heart: it shows Brad D. attempting to check out and listen to an audio book in digital form from his local library. (This cartoon is too big to display here; click the link to view it.)

Matt Neuburg painted a word story of the same horrible process in “A Silly Saga: How I Downloaded an Audio Book from My Library” (5 March 2009). Brad Dielman’s saga ends with downloading the audio from a BitTorrent site.

In both cases, the examples aren’t, “Hey, go steal stuff and rip off the copyright holder!” Rather, the humor lies in how hard companies make it to access content we have already paid for and can access entirely legitimately. Media firms seem to delight in making it hard, all of which contributes to “piracy” as a form of civil disobedience.