WeatherBug Elite is a full-featured weather conditions and forecast app from AWS Convergence Technologies. Reviewed version: 1.0, released on 24 April 2009 and priced at $0.99.

I admit it, I care deeply about the weather. Perhaps that’s unfashionable in today’s technological (and largely indoor) society, but I grew up on a farm listening to forecasts on our Radio Shack weather radio because we needed to know when there would be enough dry weather to make hay, for instance. While I managed to escape the farm, I still want to know what the current and near-future weather is before I go out for a run, and it’s especially important when planning for upcoming races.

I used to think that weather Web sites were one of the best uses of the Internet, but after using weather apps on my iPhone, I’ve switched completely. When you want to know what the weather is going to be like, it’s much easier to pull out your iPhone and tap an icon than it is to get to a computer, load a Web page, and attempt to parse the forecast out of the horrible layouts of many weather sites.

After looking at a few weather apps a while back, I settled on WeatherBug Elite, which also comes in a free, ad-supported version called WeatherBug that lacks a few advanced features. I used the free version for a while, but the ads are a bit annoying, and at $0.99, it was easy to ante up for WeatherBug Elite.

Key Features — It’s not clear to me exactly where most weather apps and Web sites get their information, but in paying attention to many of them over the years, I’ve never noticed any one source being notably more accurate than others. WeatherBug is unusual in that it operates its own proprietary weather network with over 8,000 tracking stations and more than 1,000 cameras on public buildings throughout the United States. That can equal more accurate local data in places where you happen to be very near a station, though forecasts tend to be the same regardless of which station in an area you choose.

I chose WeatherBug over other options at the time for two basic reasons. First, it displays current conditions on the main screen in an easy-to-read yet detailed fashion. Second, it also shows the next half-day forecast on the main screen, complete with an overview icon, a text forecast, and the daytime high or nighttime low. Thus, a single tap on the WeatherBug icon gives me all the basic weather information I’m likely to want with a single glance, after only a brief pause for the app to fetch new data. 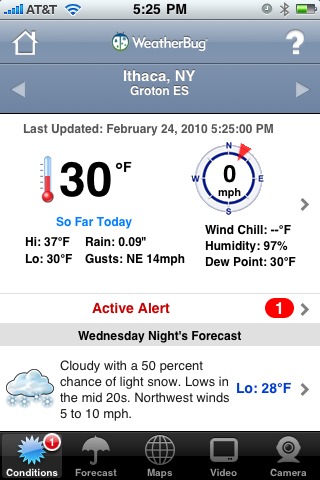 Also, if there are any weather alerts, such as the winter storm watch shown here, WeatherBug puts a red badge on its icon and displays the alert between the current conditions and the next half-day forecast.

Tapping the current conditions part of the main screen provides a separate Current Conditions screen that repeats the same information in a tabular layout, adding only two more pieces of data: Monthly Rain and Rain Rate. As a result, I seldom bother to check it. (For hyper-local information, I use the Ithaca Climate Page, which includes data from a station only a few miles away, along with monthly summary information that’s key for discussion about how hot or cold, or how wet or snowy, a particular month has been.)

I often tap the half-day forecast from the main screen to show the Forecast Details screen for each half-day for the upcoming week. This screen offers a lovely level of detail, again with icons, full text forecasts, and the high and low temperatures. Too many other weather apps (including Apple’s own lowly Weather app) rely purely on icons, as if an icon could somehow encapsulate a forecast like this: 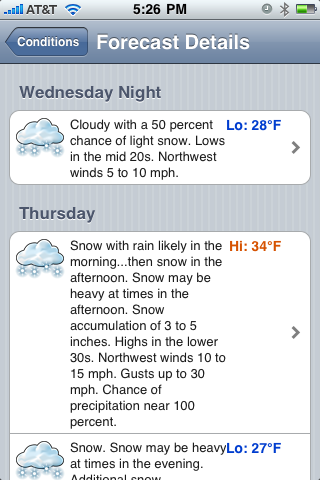 Now that’s a forecast you can sink your teeth into! Oddly, tapping the Forecasts button in the toolbar at the bottom presents you with an abbreviated and less useful Forecasts screen, requiring another tap to get to the good Forecast Details screen.

Tapping a forecast in the Forecast Details screen, or tapping the Hourly button in the abbreviated Forecasts screen, shows the hourly forecasts for the current day. Unfortunately, it always shows the current day initially, no matter which day you’ve tapped in the Forecast Details screen, which seems like a bug to me. Once in the Hourly Forecast screen, you can tap arrows at the top of the screen to move from day to day.

The other aspect of WeatherBug that I adore is the radar map, which can zoom to the individual house level. That’s too close, of course, but I often like seeing the weather within a 20 mile radius to see what will happen in the next hour or two, as well as within a 200 mile radius to see what’s coming later in the day. Standard iPhone controls provide smooth zooming. Even better, the radar map can be animated, so you can see the motion of any precipitation over the last few hours. You can also adjust the opacity of the precipitation overlay in the radar map. 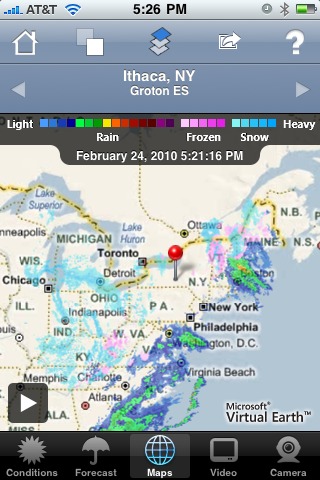 WeatherBug puts a pin in the location you’ve set, but that’s likely generic. All you have to do to drop another pin is tap and hold on the desired location. Once a pin has been dropped, tap it to show an icon of the current conditions, the current temperature, and, optionally, a circle of user-specified radius (so you can tell how far away some rain is).

WeatherBug Elite also offers temperature, pressure, humidity, and windspeed maps, along with infrared and visible satellite maps, plus maps of the next day’s high and low temperatures. I occasionally turn one of those on to see something specific, but always return to the radar map (it can show only one data overlay at a time).

The final two buttons on the toolbar – Video and Camera – display a 2 minute national weather forecast that I’ve never watched all the way through, since I’m generally uninterested in the overall weather across the country (though I love checking out the radar maps of storm systems when I hear complaints from geographically dispersed friends in Twitter). Almost as pointless are the still images from cameras that WeatherBug has installed on various schools and other buildings in the area. Unless I’m going to one of those exact locations, I can’t see the utility – though the photos can be animated to get a sense of clouds moving through.

It’s easy to add multiple locations to WeatherBug and to switch between them using the arrows at the top of the screen (though it would be useful to have the list wrap around when there are many sites included, or to be able to visit a station from the Locations screen), and you can always select Current Location to get the nearest station, which is nice when travelling.

Suggestions — Perhaps the only trouble I’ve hit recently was in determining which station is closest to the Moscone Center when I searched for “San Francisco” before leaving for Macworld Expo – my local knowledge wasn’t sufficient to choose among the many choices. The solution was to zoom in tight on Moscone Center itself, and then to drop a pin from which I could add the appropriate saved location (Potrero Hill).

From an interface standpoint, WeatherBug suffers mostly from replication – the Current Conditions screen should add more data (like snowfall, and current snow depth) that’s not on the main screen or be dropped, and the abbreviated Forecasts screen is simply unnecessary and could be eliminated in favor of the Forecast Details screen. Plus, as I noted before, the hourly forecast should reflect the day from which it’s accessed.

The main thing that’s missing from WeatherBug, for those of us who care deeply about our weather, is historical data of temperature and precipitation. That data is undoubtedly available, and WeatherBug’s developers just need to figure out a way to display it in a useful form.

Finally, if historical data were available, something I’d love to see in a weather site or app is a retrospective view on accuracy. We all know that weather forecasts are based on percentages and likelihoods, and the actual weather can often vary quite widely. Wouldn’t it be great if WeatherBug could be honest about how accurate its forecasts were?

Competition — I won’t pretend that WeatherBug is unique in what it does; it’s merely that it provides the detailed information I want in an easy-to-use interface. Other well-known general (as opposed to special-purpose) weather apps for the iPhone include the following. If I’ve missed a major one, let me know in the comments so I can add it to this list, and if I come across an app I like better than WeatherBug, I’ll review it separately.