Do you remember car-rental firm Avis’s ads: “We’re number two; we try harder”? Hertz was the big dog, and Avis used this campaign to explain why its service was better, because it had to be.

T-Mobile is in the same boat, except it’s number four. Verizon Wireless, AT&T, and Sprint Nextel, in that order, are bigger than T-Mobile in terms of subscribers, revenue, and 3G coverage. But the plucky number four is trying to catch up.

I’ve been following T-Mobile closely because the company is trying to build the fastest and most robust 3G network in the United States, all while keeping its pricing structure competitive with and more flexible than the three dominant carriers. It’s in the process of dramatically increasing its already fast network, too, far ahead of its competitors.

T-Mobile may be poised to be an alternative to AT&T, because both firms use the same worldwide GSM standard and the 3G flavors that have emerged from it; Sprint and Verizon chose CDMA, although both are migrating to different technology in future networks.

But T-Mobile has a technical disadvantage that has kept it from being a true alternative from AT&T for the iPhone (jailbroken or unlocked) and that will prevent it from being a choice for the iPad with 3G. (Although it’s technically legal to unlock an iPhone, the Digital Millennium Copyright Act seems to make it impossible in fact to unlock one legally.)

T-Mobile’s 3G Network — T-Mobile acquired the spectrum necessary to build a nationwide 3G network only a few years ago, and launched coverage in its first city in early 2008. The company now claims that over 200 million people spread across nearly 300 cities could use its 3G offering. Its three national competitors claim somewhat greater 3G coverage that’s available to between 233 and 280 million people out of the total 307 million U.S. residents. (Several smaller carriers, such as MetroPCS, U.S. Cellular, and Cricket Wireless have only regional markets covering several million.)

But by starting from scratch so recently with 3G, T-Mobile hopes to have an advantage. Because the demands on 3G networks were already being understood as T-Mobile planned its build out, the company says it has developed more-robust backhaul – the link from cell towers to the rest of the network. Where AT&T has struggled, T-Mobile claims to have the links in most places at the scale needed to serve the fastest 3G that will be out this year.

AT&T and T-Mobile have both deployed HSPA (High Speed Packet Access), and both started with the 3.6 Mbps downstream flavor and have moved to 7.2 Mbps downstream (often called HSPA 7.2). In contrast, Sprint and Verizon’s 3G service uses EVDO Rev. A, which tops out at 3.1 Mbps downstream. (These are the highest possible throughput over the air, and users on average see 20 to 50 percent of that rate with higher bursts.)

But AT&T, despite having put in the software update to make HSPA 7.2 possible, said it’s not yet actually offering the higher speed because of limited backhaul. The company plans to roll HSPA 7.2 out on a city-by-city basis as it upgrades base station sites with additional backhaul capacity. In contrast, T-Mobile says it’s ready now; some reports claim T-Mobile has fiber and wireless links that provide as much as 20 Mbps per site, which is enough to cover multiple separate channels of 3G in the same location.

This backhaul capacity might give T-Mobile bragging rights. Its 7.2 Mbps network was announced only a few weeks ago, and the latest PCWorld tests conducted by Novarum – a firm I rely on for accurate data about wireless rates – were completed in January 2010.

Where T-Mobile suffers is in the frequencies it uses for 3G. Cell phones come with radio chips that enable them to operate over many different frequencies, because different bands (ranges of frequencies at various points in the radio spectrum) are available to different companies and in different countries.

Here’s the problem. T-Mobile wasn’t able to acquire any of the 1900 MHz band, and uses the 1700 MHz band instead. Further, phones designed for the T-Mobile 3G network send transmissions using 1700 MHz and receive data from the network using 2100 MHz. T-Mobile is nearly unique worldwide in using the 1700 MHz band at all.

EDGE frequencies are compatible, however. If you buy a 3G iPad and want to use it on T-Mobile’s network, and T-Mobile starts producing micro-SIM cards, you could use the network at EDGE speeds, which are typically no faster than about 200 Kbps.

That’s a bummer for consumers and T-Mobile, as it means we don’t have the compatibility necessary for true unlocked competition between the two GSM carriers in the United States. In most other countries with multiple 3G carriers, frequencies are harmonized, and this won’t be an issue.

T-Mobile USB Modem — That’s all technical background, but I gave T-Mobile’s USB webConnect modem a workout on a recent trip: my travels to California for the Apple iPad launch. I figured this would be the perfect circumstance, since Verizon, AT&T, and Sprint mobile broadband modems would clog up those networks; T-Mobile was likely to be free and clear.

The modem, made by Huawei, is an attractive stick with support for Mac OS X 10.4 and later, along with several flavors of Windows. It costs $129.99 retail, or $19.99 with a two-year contract. The modem requires a simple software installation of unobtrusive – if not particularly attractive – connection software. 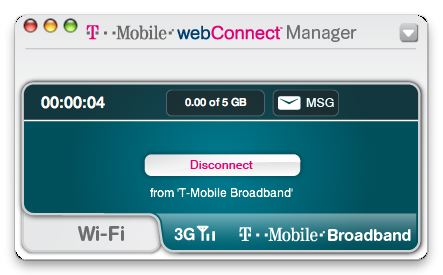 I pre-tested the extent to which it would drain my 2008 MacBook’s battery before the trip to the iPad launch to see whether I could get through a two-hour event on a full charge; it looked like I could just squeak through, which turned out to be the case. (I get about the same battery life with Wi-Fi turned on and active, too.)

The USB stick performed admirably during Steve Jobs’s talk, while I heard grumbles all around me from users of other 3G networks that were failing under the collective load. Score one for diversity. In testing, I didn’t see the faster HSPA 7.2 rates – I tested mostly in January and early February 2010 – but I frequently saw speeds well over 1 Mbps downstream.

T-Mobile’s 3G Data Plans — T-Mobile just put a twist in its service plans on 11 March 2010. It used to charge the same for its highest-level usage plan as its three competitors: $59.99 per month gets you up to 5 GB in combined upload and download usage. Additional megabytes on T-Mobile cost 20 cents each (that works out to $200 per GB), which is substantially higher than competitors.

T-Mobile also offers a lower, lighter-weight usage plan: 200 MB for $29.99 per month, with the same additional per-megabyte fee. Competitors charge $5 or $10 more per month for the same or slightly more data. As I wrote in “Can You Get By with 250 MB of Data Per Month?” (2 February 2010), it’s hard to figure out how much data you wind up using. Laptop usage tends to be far higher than the smartphone usage I was tracking. You can check usage directly from within the connection software. 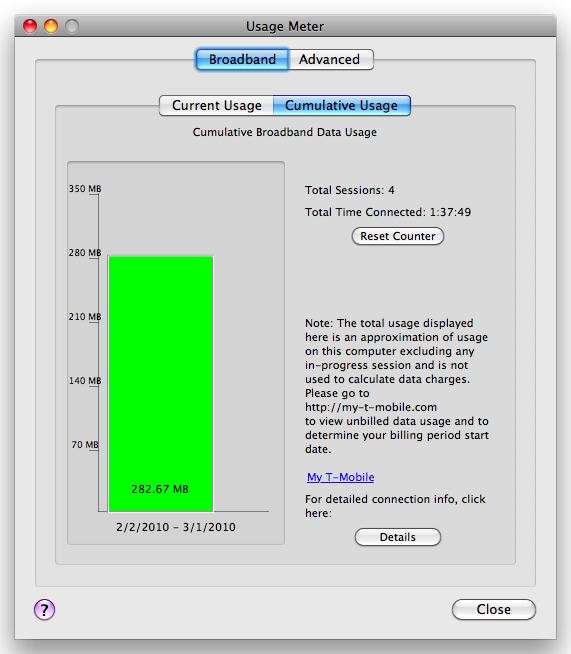 But T-Mobile now charges those monthly rates only if you accept the company’s subsidized 3G hardware; those plans also require a two-year contract.

Unmetered Wi-Fi usage at all of T-Mobile’s own and roaming partner hotspots is included with all plans.

T-Mobile also recently became the first carrier to offer a lower monthly data price for the Google Nexus One phone when purchased outright; AT&T and others charge you the same monthly rate whether you own the phone or got a subsidy by signing a two-year contract, while T-Mobile drops the price $20 per month. That’s $480 over two years, far more than the difference between the subsidized and unsubsidized rate.

Virgin Mobile Broadband has an interesting alternative to T-Mobile’s month-to-month possibility. Despite being owned by Sprint Nextel, Virgin has a distinctly original broadband approach. Buy its $99.99 USB modem (which requires Mac OS X 10.4 or later), and purchase units of access from its Broadband2Go plan. Rates are $10 for use of up to 100 MB within 10 days, or, with a 30-day expiration, pay $20, $40, or $60, for up to 300 MB, 1 GB, or 5 GB, respectively. There are no overage fees; you just buy more units of service.

T-Mobile now beats Virgin Mobile for an unsubsidized plan at the 5 GB level, but Virgin Mobile (using Sprint’s network) still has more coverage area. However, T-Mobile charges its 20-cents-per-MB overage for extra usage during any billing period: another 5 GB would be $1,000 on T-Mobile but just $60 with Virgin.

Faster Speeds Ahead — T-Mobile says it has just begun in its move towards higher speed. In early February 2010, the company announced the commercial rollout of HSPA+, an update to HSPA 7.2 that will offer raw data rates as fast as 21 Mbps.

The company isn’t promising specific downstream speeds, but it will likely be possible to get the same range as Clearwire’s WiMax service, which, in the limited markets currently served, pumps 3 to 6 Mbps downstream with higher burst rates. Clearwire aims for 120 million people covered by the end of 2010.

For now, T-Mobile’s HSPA+ service is available just in Philadelphia, with the upgrades to both coasts coming as we move into spring and summer, and most of T-Mobile’s national footprint by the end of 2010. A new HSPA+ modem, the Rocket, was released on 14 March 2010 for $99.99 with a two-year contract (or $199.99 without the contract).

HSPA+ puts T-Mobile at the top of the speed heap, and possibly with the best backhaul among 3G operators. Only further testing will tell. Verizon’s next-generation LTE (Long Term Evolution) service – fourth generation or 4G – can deliver 5 to 12 Mbps downstream, but won’t be ready until later in 2010. Initial LTE devices will be limited to data adapters; smartphones may not appear until 2012.

Verizon says it will light up 25 to 30 metro areas with LTE in 2010, covering 100 million users, with the rest of its footprint covered by 2013. AT&T will also deploy LTE, but its timetable extends further into the future, with 2011 seeing its first commercial deployment.

The real question will be whether T-Mobile can deliver a service that’s enough faster, better, and cheaper than its more heavily used competitors. If so, it could rise from its fourth position to challenge the top contenders.

Comments About Can T-Mobile’s 3G Speed Overcome Its Frequency Limitations?