Apple has quietly explained what the cost will be for iPad owners to upgrade or extend 3G data service with AT&T in the middle of a billing cycle when you’ve opted for the 250 MB plan. This explanation is hidden at the bottom of the iPad 3G page that Apple posted several weeks ago.

What wasn’t known before was the upgrade cost if you have a 250 MB plan and want to extend service during a month, likely because you expect to use up your allotted bits. The bottom of the 3G iPad page shows an iPad screen capture along with text that’s a bit opaque – so opaque I can’t find any other Mac site having explained what’s meant. I’ve also queried Apple for clarification, but so far haven’t received an answer. 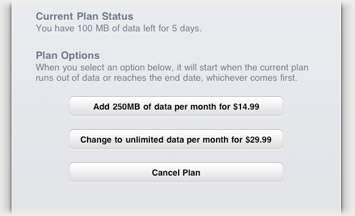 The two options are to “Add 250 MB of data for $14.99” or “Change to unlimited data per month for $29.99” – the same price as for those two regular service plans. But the tiny text above the buttons reads, “When you select an option below, it will start when the current plan runs out of data or reaches the end date, whichever comes first.”

That says to me that Apple and AT&T are using the situation as an opportunity to encourage users to switch to the unlimited plan and make some additional money in the process. If you try to lead a trim data life and save $15 by opting for the 250 MB plan but use up your allotted bits, you’ll pay a full $29.99 to upgrade to unlimited during the month, or an extra $14.99 to buy just another 250 MB.

TidBITS editor Mark Anbinder suggested an alternate interpretation: that the monthly billing period restarts after you choose a new plan and you run out of data. In this case, a “month” is a flexible block of time (presumably 30 days) instead of a calendar month. That would be kinder – and cheaper – than my interpretation.

Either way, upgrading is a clever idea. Whether it’s an update in the current billing cycle or the start of a new cycle, the charges aren’t overage fees, those odious and insanely high 3G rates ($50 to $200 per GB) that carriers charge for laptop- and router-anchored 3G plans when you exceed a plan’s data. The two upgrade options are limited fees between which you can choose quite easily.

The upgrade option is also a marketing tool for people who chose 250 MB initially but find themselves running out of data: if they switch to unlimited, then that’s the plan in effect the next month (whenever that month starts). They’ve already paid as much as $44.98 in a 30-to-59-day period for 250 MB plus the unlimited upgrade, which makes $29.99 in subsequent months seem cheaper. And, if they forget to cancel in the following month, that’s additional revenue for AT&T – but not so much to make users angry.

So far, the Apple and AT&T 3G pricing is striking a clever balance, and offering terms that no other carrier except Virgin Mobile – with its “buy data in chunks” plan – comes close to offering.