In the short time it has been around, Apple’s App Store has been a startling success. Yet the intense demand created by such popularity quickly revealed the shortcomings in Apple’s virtual marketplace. Apple has now remedied one of those weaknesses, enabling customers to purchase iPhone, iPod touch, and, soon, iPad apps as gifts for friends, family, and colleagues.

While the iTunes Music Store has long provided the option of gifting music, movies, and television series, it has taken almost 19 months to see the same functionality made available for iPhone apps. Until now, the closest thing to “gifting” apps would have been the 100 promotional copies a developer receives for the purpose of distributing an app to members of the media. But the two aren’t really comparable: a limited number of free promotional copies distributable only by the maker of the app versus the unlimited ability for anyone to purchase and share the apps they enjoy with anyone else.

To gift an app, simply navigate to its page within the App Store, click the drop-down menu next to the Buy App button, and choose Gift This App. Since gifting implies a purchase, it is available only for paid apps (though you can share links to free apps via email, Facebook, and Twitter through the same drop-down menu process). 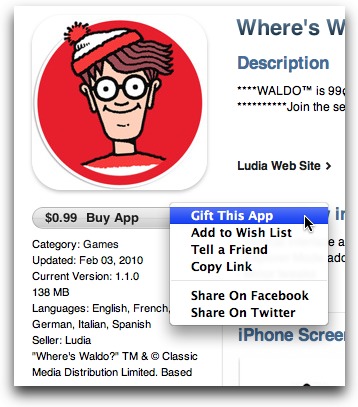 Once you have selected Gift This App, iTunes displays a special Gift page that enables you to enter your information and the recipient’s, along with a personal message to be sent along with the gift code. There’s also the option to print out the gift information, as opposed to sending it by email, for those who want to retain some of the real-world niceties of gift-giving by putting the certificate in a card. 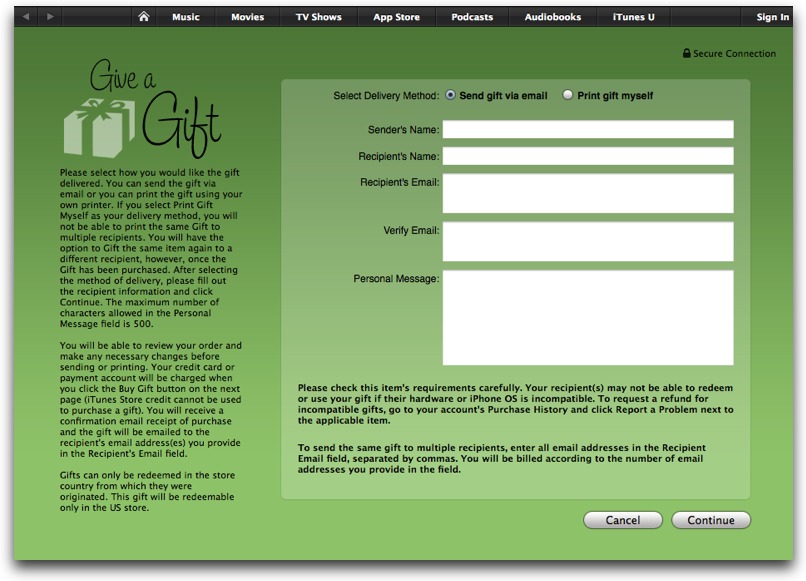 As you would expect, the gift is billed directly to your iTunes account. One unfortunate catch is that gifts are redeemable only in the store country from which they were sent. So if you’re living in New York, you can’t give an app to a friend in London, for example. Also, it’s worth making sure the recipient will be able to run the app before you send the gift code, so check the Requirements text before sending.

While the capability to give apps as presents was long in coming, it’s certainly nice to have it in the App Store now. The potential for revenue gains for both Apple and app developers is huge, and given the range of what an app can be these days – a game, an organizer, a travel companion – and the low cost of most apps, it opens up a whole new category of low-impact gifts that won’t clutter someone’s house or end up in a landfill.