After more than a year of leaked details and trials, AT&T announced it would ship its 3G MicroCell for $149.99 in mid-April 2010. The 3G MicroCell is a femtocell, a short-range cellular base station designed to augment coverage in a home or small office, with traffic – both voice and data – handled over subscriber-provided broadband. AT&T has an information site with a perky actress explaining the service. 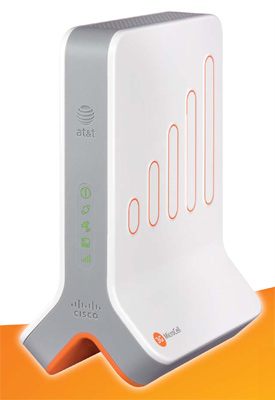 A femtocell offloads traffic from a carrier’s constrained cellular infrastructure, avoiding use of local spectrum for handling the signal and backhaul for routing calls and data to the rest of the network. Sprint Nextel, T-Mobile, and Verizon Wireless have similar offerings. (T-Mobile technically uses UMA, unlicensed mobile access, which relies on Wi-Fi in a home instead of extending a cell network into the house.)

By default, calls placed via the 3G MicroCell count against your normal voice minutes, even though you’re not using AT&T’s cellular network for the connection. AT&T will also offer a $19.99 per month unlimited domestic calling plan for calls made or received on the 3G MicroCell; minutes aren’t deducted from your voice contract. The price is the same for individual or family plans. A $100 mail-in rebate on the femtocell is available if you sign up for this plan; AT&T will kick in another $50 through a mail-in rebate to new DSL (1.5 Mbps or faster) or fiber customers, too.

However, because even AT&T’s most basic voice plans include unmetered calling from 9 PM Friday to 6 AM Monday, and from 9 PM to 6 AM during weekdays, only those who use high numbers of minutes during weekdays and early evenings at home will benefit the most from the unlimited 3G MicroCell calling plan.

The 3G MicroCell handles both 3G voice and data service, and will work with up to 10 registered numbers. AT&T says that four calls can be in progress at the same time. The number registration also means you don’t have to worry about neighbors hopping onto your service, even though that would directly benefit AT&T.

3G data is routed via the 3G MicroCell, too, even though AT&T offers no special deal for unlimited data carried on your own broadband network. Most sensible people would be using Wi-Fi for that purpose, although some regular phones and smartphones with 3G still lack Wi-Fi.

The 3G MicroCell, like femtocells provided by Sprint and Verizon, includes a GPS receiver and a long antenna cable. Because each carrier has exclusive licenses to specific frequency ranges dependent on geography, a clean GPS signal must be extracted to ensure use of only the right chunks of spectrum. GPS is also used to provide E911-compliant call information for emergency services. Additionally, the GPS receiver prevents you from using GPS in an area in which AT&T has no frequency licenses and outside the United States.

In cities like San Francisco and New York, where complaints about iPhone service have been particularly severe, AT&T could get a new lease on life if it can convince its customers to pony up for the 3G MicroCell.

Several analysts last year suggested that cellular carriers simply give away femtocells to customers in poor service areas as a marketing and loyalty tool that would also save on infrastructure update costs. In dense neighborhoods with lots of femtocells, congestion on existing cell sites could be significantly reduced as traffic was diverted to home broadband.