For anyone who uses Gmail via its Web interface, there’s a new plug-in for Firefox, Chrome, and Mailplane called Rapportive that replaces Gmail’s right-hand advertising sidebar with a widget that shows you information about the sender of the currently displayed email message.

I’ve seen no word as to what Google thinks about this, given how it replaces advertising, but from a user perspective, it’s generally a big win. How many times have you ever clicked an ad in a Gmail message? I can count the times I’ve done so on one hand, and most of those clicks were pure curiosity as to what the ad might be for, not because I was actually interested in the product. Ads in Gmail are an oddity for Google anyway, because Gmail is essentially a private space (as opposed to the public space of the Google search results), because Google happily lets any Gmail user avoid the ads by using POP or IMAP to read email in a client, and because none of Google’s other private-space services (Docs, Reader, Calendar, Wave, iGoogle,
etc.) have advertising.

Despite this huge win in trading ads for useful information, there is a slight loss of functionality after you install Rapportive, since it takes over the entire right column in Gmail, which includes not just the ads but also the conversation controls for creating a new window, printing the email, creating a new Google Docs document, expanding and collapsing all the messages in the conversation, and forwarding the conversation. Rapportive repositions those links just above the right edge of the message and drops their text labels, which is a little too bad. 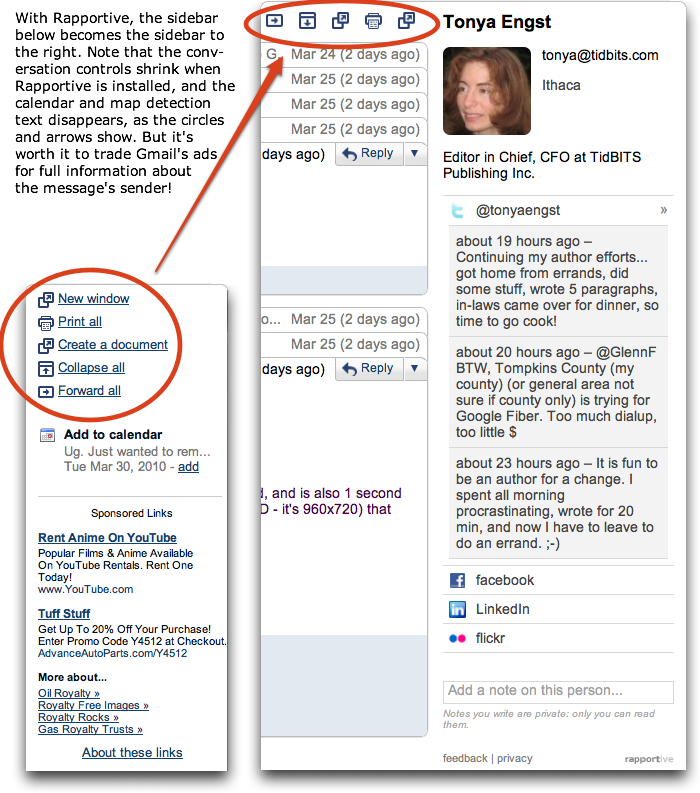 Perhaps more troubling for some will be the loss of Gmail’s automatic detection of addresses for mapping and of appointment times for event creation, since those, when Gmail finds them, appear in that right column between the conversation commands and the ads. Rapportive just eliminates those shortcuts. I can’t say I’m too bothered, since although I think they’re cool, I’ve never actually used them.

But the information Rapportive does provide can be highly useful, including the person’s name, picture, email address, location (which you can click to map), position, and Twitter feed, along with links to their pages on other social networking sites like LinkedIn, Facebook, Flickr, and many others. In my usage so far, I’ve quite enjoyed seeing people’s pictures and recent tweets, and sometimes it’s helpful to learn what someone’s professional position is, if I haven’t previously met them. I believe the position information comes from LinkedIn, which sometimes leads to slightly odd results if that information hasn’t been kept up to date.

Rapportive discovers all this information from the person’s email address, so in theory it shouldn’t be a privacy intrusion. The main concern I can see is if someone is corresponding in a professional capacity in email but posting to Twitter in a personal capacity via an account associated with the professional email address. Having your drunken party tweets showing up next to your email messages to prospective clients or business colleagues would be a no-no, but then again, if you’re posting to a public Twitter account, you should be aware that what you’re saying could be associated with you in different contexts.

At the bottom of the Rapportive plug-in is a field for you to add your own notes that only you will see; this could be quite helpful for answering that “Who the heck is this person?” question for people with whom you correspond only sporadically .

When you’re viewing a conversation with multiple senders in Gmail, exactly who shows up in the right sidebar can be a bit variable. Usually it’s the person who last contributed to the thread, but every so often, someone in the middle of the thread appears in Rapportive instead. You can force Rapportive to show a particular person’s information by mousing over their name in the message’s top line (this trick works not just for the colored name of the sender but also for the plain-text names of recipients).

Rapportive is taking suggestions on a UserVoice forum; it’s worth reading through to see what users are asking for. The first thing I found myself wanting is a link that would show all my Gmail conversations with the current person. That has been suggested, and the UserVoice system lets you see what others have suggested and vote on those ideas rather than creating duplicates. (As an aside, I haven’t used the UserVoice system before, but it seem quite clever.)

Installing Rapportive in Firefox and Chrome is easy, just like any other extension, and turning Rapportive on in Mailplane is even easier, since it’s merely a checkbox in the Advanced view for each account you’ve set up in Mailplane’s preferences. Alas, Rapportive does not work in Safari just yet, but the company is working on adding support for more browsers, with Internet Explorer 8 next. Perhaps with some encouragement, Safari will come shortly after.

In the meantime, Rapportive is one of the most interesting additions I’ve seen to Gmail – and to email in general – in some time, and it’s well worth a look for those using Gmail’s Web interface.