As is commonplace whenever Apple releases a new iPod or iPhone OS device, the company has updated iTunes to support the new device, adding a bunch of small improvements at the same time.

Most important, iTunes 9.1 includes the capability to sync music, movies, and television shows to the iPad. Most of that is under the hood, of course, but iTunes 9.1 also changes the Advanced > Create Apple TV Version menu item to Create iPad or Apple TV Version; presumably it creates a version of a selected video file that’s compatible with both the Apple TV and the iPad. Frankly, I’m wildly unimpressed with this interface; Apple should figure out how to do these conversions behind the scenes without bothering the user, as with the capability to convert song bit rates and photos. I realize the computation is far more intensive on the video side, but that’s still a weak excuse for a
bad interface.

iTunes 9.1 also adds the capability to organize and sync books that you’ve downloaded from the iBookstore through iBooks on your iPad, or that you’ve added directly to your iTunes library. The top-level Audiobooks item under Library in the sidebar has been renamed to just Books and now stores both audiobooks and EPUB books. (Although you can drag PDFs into iTunes, they won’t appear in Books even if you set the genre metadata appropriately.) In the screenshot, I’ve imported EPUB versions of some of our Take Control books, and although they sync to an iPad, they can’t be read in iTunes. (On disk, they’re sorted into the Music folder by author, rather than appearing in a Books folder the way Movies, Podcasts, and TV Shows do.) A new Books
tab that appears when you connect a device enables you to select which books will sync, though EPUB books currently don’t sync to an iPhone or iPod touch.

The last change that Apple mentions is the capability to rename, rearrange, and remove Genius Mixes – an organizational godsend for those who like Genius Mixes but find them overly rigid. You can’t restore a single deleted Genius Mix, but you can Control-click or right-click in the Genius Mix view and choose Restore All Genius Mixes to bring back those that you’ve deleted. Plus, next and previous track icons appear on the Genius Mix icon while it’s playing, though there’s still no way to see what songs it contains. 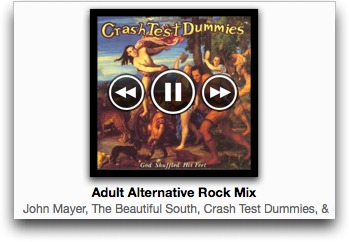 But Apple failed to call out additional welcome changes. Most notable among these is iTunes 9.1’s capability to convert higher bit-rate songs down to 128 Kbps AAC for syncing with an iPod, iPhone, or iPad. This feature will be most welcome for those who prefer to rip songs at high bit rates that consume more space than would be ideal on these space-constrained devices. Look for the “Convert higher bit rate songs to 128 Kbps AAC” checkbox in the Summary tab when your device is connected.

Other small changes – many of them in interface wording – abound. Chris Breen at Macworld has identified a number of them, including the addition of a Reset iTunes Store Cache option in the Advanced tab of the iTunes Preferences window. See his article for a full list.

Finally, while nearly all of iTunes 9.1’s security content applies only to the Windows version, one fix does apply to Mac OS X, and resolves a seriously pesky bug: playing a maliciously crafted MP4 podcast could result in trapping iTunes in an infinite play-loop that persists even upon restarting the program.

iTunes 9.1 is a 93.6 MB download and is available for free via Software Update or the Apple Support Downloads page. It requires Mac OS X 10.4.11 or later.