One of the most popular Macintosh programs of all time will be resurrected this weekend when Apple ships the iPad. Eudora, the venerable email client created by Steve Dorner while at the University of Illinois at Urbana-Champaign in 1988, purchased by Qualcomm in 1992, and maintained through its eventual demise in 2006, will return to life as a free iPad-only app. An undergraduate interning at Qualcomm named Paul O’Walty, while engaged on some cleanup of the Eudora group’s revision control system, discovered the Eudora source code and decided to port it to the iPhone OS, with the specific intent of seeing if he could get it to run acceptably on the iPad.

Although Qualcomm has reportedly signed off on the release of Eudora for iPad, due to O’Walty’s reliance on the open-source aspects of the Eudora code base and use of the Mail framework on the iPad, he did admit to some trepidation about whether or not Apple would approve Eudora for iPad, since it replicates the functionality of the iPad’s Mail app. Eudora will be available only for the iPad; it wasn’t practical to convert it to the small screens of the iPhone and iPod touch.

From what I’ve seen of the beta O’Walty sent me, Eudora on the iPad will look and work as much like the classic version of Eudora as possible given the iPad’s multitouch interface. Standard Eudora features like a message preview pane with content concentrator (for showing threaded messages without displaying quoted content) convert well to the iPad’s 1024 by 768 pixel screen, which, if you think about it, is significantly larger than the screens commonly available when Eudora was first developed in 1988. Also, the Mailbox and Transfer menus work much as they did in the Mac version, providing quick, hierarchical access to mailboxes without wasting screen real estate on unwieldy panes like other Mac email clients. Fortunately, one of my
favorite Eudora tricks – Option-clicking on a piece of metadata in mailbox windows to select messages with similar metadata – is available when the iPad is outfitted with a keyboard via either the iPad Keyboard Dock or a Bluetooth keyboard. 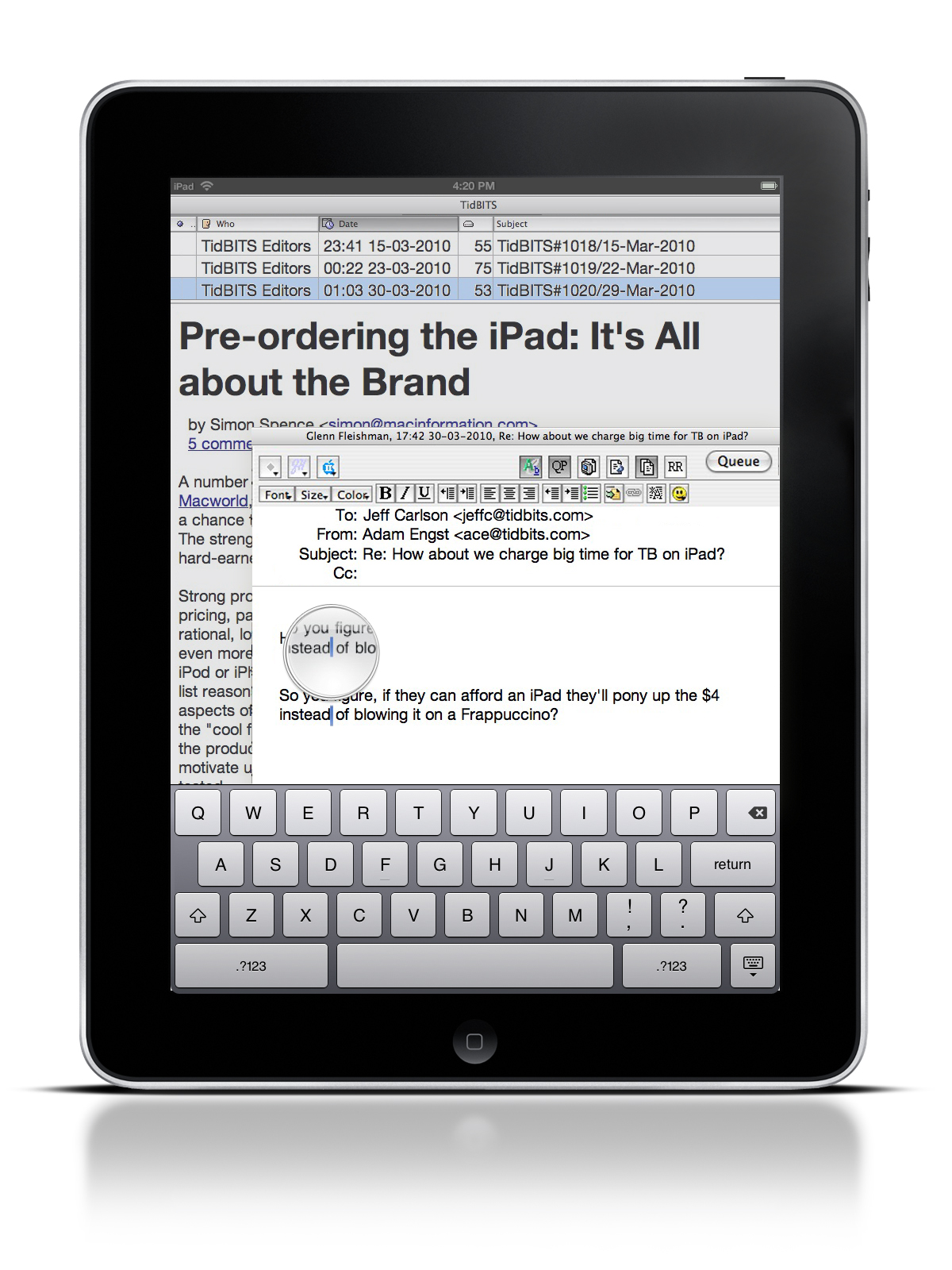 O’Walty admitted that he had to cut some corners when porting some of the last-century Eudora code to run on the iPad. Although Eudora for iPad looks and works much like the classic program, some of Eudora’s traditional – and much-vaunted – flexibility is missing. Most notably, although the essential option “Waste cycles drawing trendy 3D junk” remains (and checking it does reduce Eudora’s performance on the iPad), the vast majority of Eudora’s 1,031 x-eudora-settings options haven’t yet been brought over from the original code base.

Nevertheless, for die-hard Eudora users, the release of Eudora for the iPad will recreate a familiar and highly productive environment on the new computing device.

Comments About Eudora Returns… on the iPad