We knew the iPad would be a somewhat different device at its launch party in January 2010 when Apple said that it would both allow keyboard entry and import photos from cameras and SD cards. So much for being a consumption-only device. The iPad allowed Bluetooth keyboard use when it shipped, and the iPad Keyboard Dock appeared several days after.

The iPad Camera Connection Kit, however, didn’t wind up in users’ hands until last week. While the two-piece adapter set is designed for cameras, we ferreted out more kinds of uses, including audio input and video playback.

Let’s look at the ins and outs of importing.

Plug In and Import — The $29 kit comprises two separate parts, both of which plug into the iPad dock connector: a USB adapter and an SD card reader. The adapters project straight out beneath the Home button; unless you have a stand that lets you hold an iPad either sideways or with the Home button at top, you’ll need to lay the iPad flat to use either adapter. 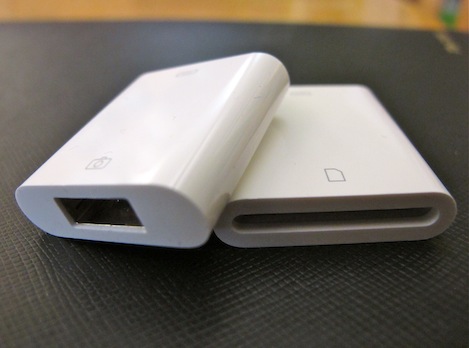 You use these adapters to transfer images from your camera to your iPad when you’re away from the computer you normally use to sync images and other data. The iPad can view the photos and also acts as a repository for the files in their original formats.

The process of importing photos couldn’t be more straightforward; it’s rather like a good hybrid of Image Capture and iPhoto’s import processes. You insert either adapter into the dock connector, then plug in a camera via USB or insert an SD card.

It may also be possible to attach a self-powered USB drive with FAT or FAT32 partitions, the standard disk format for camera images and video storage. I was unable to test this. Flash drives and USB-powered drives will not work, as the iPad doesn’t supply power from the dock connector.

The USB adapter also lets you plug in an iPhone, from which you can grab pictures as if it were a camera, just as in iPhoto. (The iPad can’t charge the iPhone via USB, however.)

The Photos app launches, and a new tab labeled Camera appears on the far right. This tab shows a preview of stored images and videos on the attached device or camera. Raw, JPEG, and movie files are supported. (See below for more on formats.)

You select images to import by tapping on them. A blue checkmark is placed on the photo when you tap and is removed if you tap again. To transfer the images to the iPad’s memory, tap the Import button: a popover offers Import All and Import Selected if you’ve selected any images. You can halt an import in process by tapping Stop Import in the upper right. (A delete option in the upper left reads either Delete All or Delete Selected, depending on whether any images are selected, if you want to remove images from the card.) 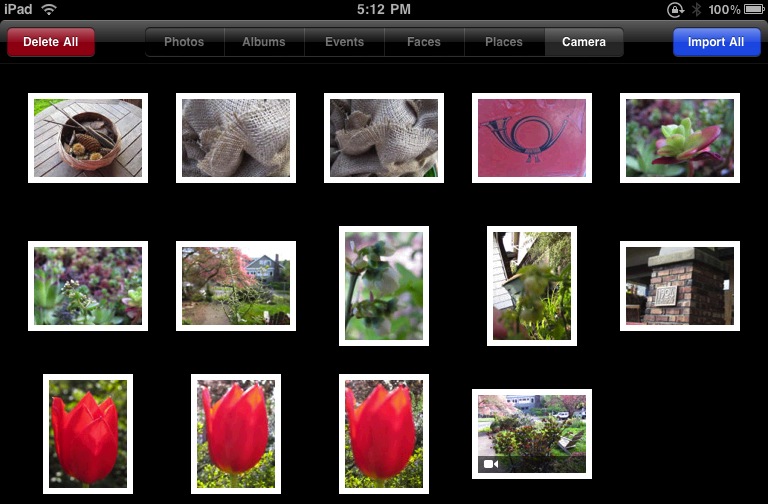 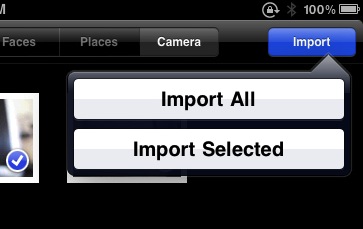 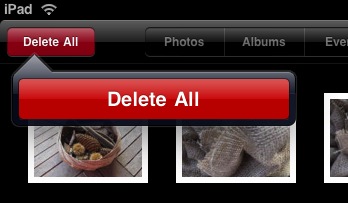 If you’ve already imported some of the images, Photos warns you of the duplication, and lets you cancel or proceed. 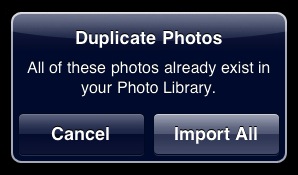 As each image is imported, it’s shown with a subtle spinning progress wheel as it’s copied over – look in the lower-right corner of the third thumbnail. The thumbnail is overlaid with a small, green checkmark when its import is completed. As in iPhoto, you’re asked at the completion of an import if you want to keep or delete the imported photos. 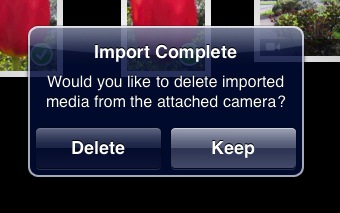 My TidBITS colleague Jeff Carlson connected a Flip MinoHD to see if the iPad would import video via the USB connector. The good news: The iPad saw the movies in the MinoHD’s memory, provided thumbnails, and successfully copied clips to the iPad. The bad news: Once transferred, the Photos app displays a Flip’s MPEG-4 formatted clip as a generic MP4 icon, and doesn’t play it when tapped. The clip remained intact when copied from the iPad to iPhoto, however; the iPad just can’t play it.

The only hiccup I saw in whole process was when I inserted a microSD card in a full-sized SD holder. While Apple’s documentation says miniSD and microSD cards can be read via an adapter, my iPad displayed an error message.

When you’re done, you simply pull the adapter out or remove the SD card or USB cable. There’s no eject button, although removing the card or adapter while the iPad is deleting or transferring images is no doubt a bad idea.

In the past, I would have thought that an iPad could serve as a transfer station to avoid running through memory cards you might bring along on a trip. But 16 GB SD cards cost as little as $36, which makes it hard to build a case for why you shouldn’t buy a stack of SD cards for offloading purposes. The cards are also less likely to be stolen or broken on a trip than an iPad.

What’s Supported? — Infuriatingly, Apple doesn’t provide a complete list of supported image and movie formats, nor supported cameras. The tiny user manual that comes with the adapters suggests going to the iPad support mini-site at Apple for a list of cameras (but says nothing about formats); there is no such list at that site, nor anywhere on Apple’s Web site at present. A Knowledge Base article will likely soon appear.

Apple does offer a list of cameras with raw support in Mac OS X 10.6, and one could assume significant overlap. Raw support is updated in Mac OS X via software updates, although often long after new cameras have appeared in the market; the iPad support would likely have to come via a full iPhone OS update. For example, I assume (but can’t test due to lack of equipment) that the cameras supported by last week’s Digital Camera Raw Compatibility Update 3.2 will not work on the iPad until an iPhone OS update arrives.

I’m no expert on raw formats and use neither Aperture nor Lightroom at the moment. However, I tested importing a CR2 raw image from a Canon PowerShot G11, and the workflow seems just right. The image is displayed as a normal photo when viewed in Photos, using a filter (perhaps the same as in iPhoto) to make it look correct. When imported into iPhoto, the original (and quite large) CR2 format file is preserved.

Working with Imported Media — You can view imported photos and videos at full scale, or use Photos or third-party apps to upload to various services, like MobileMe and Flickr.

The Photos app can send single or multiple photos via email, which is one way of uploading to Flickr and some other services. Open a collection of photos; tap the Action button (a square with a curved arrow coming out of it, located at the right edge of the toolbar); tap to select the photos you want; then tap the Email button. Direct the outgoing message to the custom email address that Flickr assigns each member to use for uploading images. Photos must be uploaded to MobileMe one at a time.

Apple claims on its ordering page for the product, “When you sync iPad to your PC or Mac, the photos on your iPad are added to your computer’s photo library,” but I was unable to figure out how this would work. It’s possible that iTunes needs a minor update to provide the necessary support or a checkbox.

Instead, I launched iPhoto, selected the iPad, and used standard import options to bring the photos into the iPhoto library. Images and videos are not downsampled or otherwise manipulated as far as I can tell. 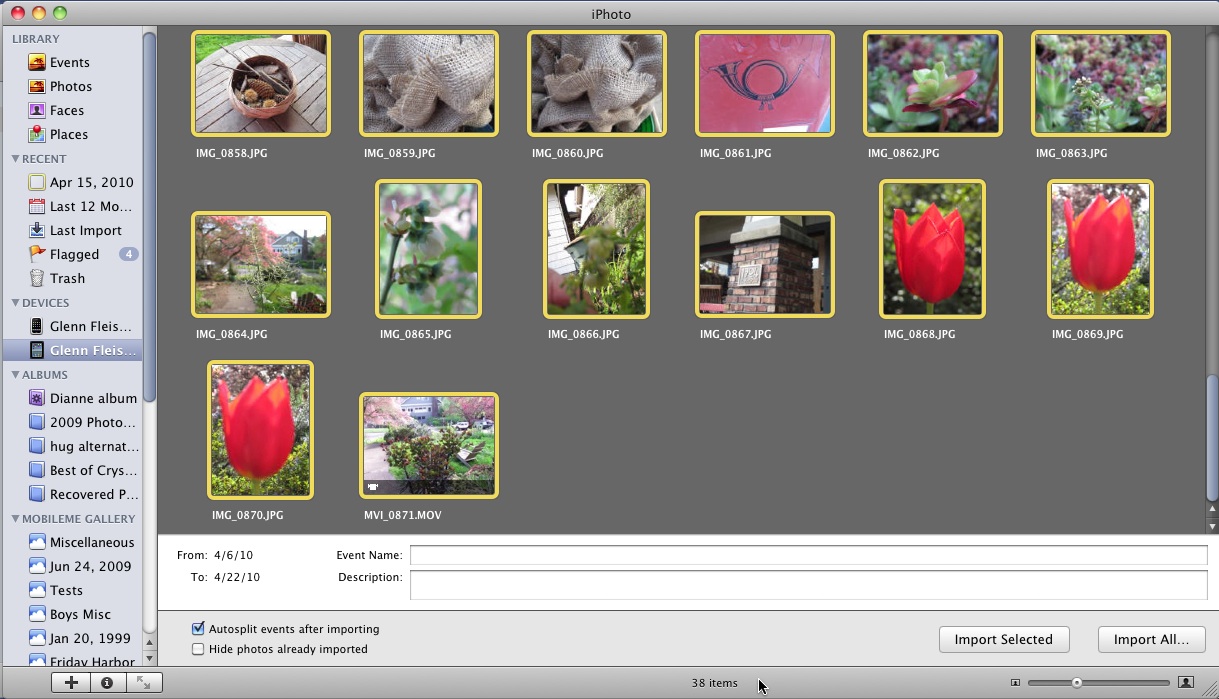 The iPad Camera Connection Kit seems to work well and as expected. Apple needs to update its online documentation quickly, and better explain how to use or enable automatic iPhoto syncing via iTunes. For $29, the kit is quite a deal.

Other Uses for the USB Adapter — As to other purposes of the two adapters, we’ve discovered a few. Because none of these are supported uses documented by Apple, it’s possible the firm would disable these capabilities in future releases.

You cannot export anything via USB jack or copy files to an SD card in the card reader. I know you want to; Apple doesn’t allow it.

So much for the widely spread trope of “the iPad doesn’t have a USB jack.” Now, it can become “the iPad’s optional USB jack doesn’t do much.” But, frankly, so far the kit does more than we expected.