I thought the universe, in the form of Apple products, was playing a nasty trick on me. A new MacBook Pro’s hard drive had failed, and on my way to a Genius Bar appointment at the nearby Apple Store, I had to reboot my iPhone to get it to play over my car stereo. When I arrived outside the store, I tried to fire up my iPad, and the screen was blank. Nothing I tried could start or restart it.

I figured that the battery must have discharged. I went into the Apple Store to see if I could plug it in to a computer, and while a cast member – er, associate – went off to find a cable, I tried the iPad, and it woke up just fine.

I apologized, went back outside, and the iPad didn’t work again. Then it struck me: my sunglasses. I removed them, and the iPad was, of course, just fine. The polarized sunglasses I was wearing had performed a neat trick.

This effect shouldn’t have surprised me. I had noticed it in the past with my iPhone 3GS while testing over a dozen GPS apps for a Macworld review. If the iPhone was in portrait orientation, I could see it just fine with my sunglasses on; when I rotated to test the apps in landscape mode, the screen became nearly black.

Studying up on this, I found that LCDs rely on two perpendicular polarized filters with liquid crystal (and other things) in between the filters. The liquid crystal changes the light’s polarization, essentially canceling the perpendicular effect that would block transmission.

I’ve never noticed this with other LCD monitors or screens, but that’s likely because the vast majority of the time I’m using a device without sunglasses, or, if outdoors, using the device in a particular orientation.

The iPad’s top polarizing filter is obviously rotated 90 degrees from the one used in the iPhone. In portrait mode, the screen is nearly black; in landscape mode, it appears normal. The photos were taken through the sunglasses I was wearing. 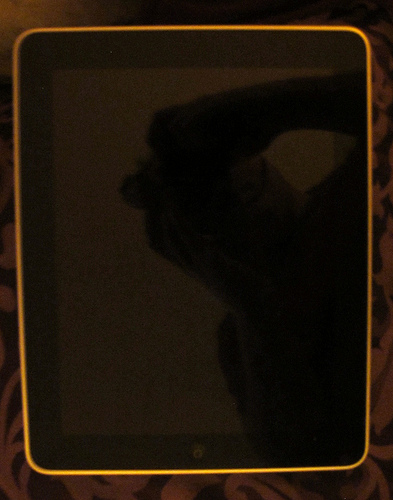 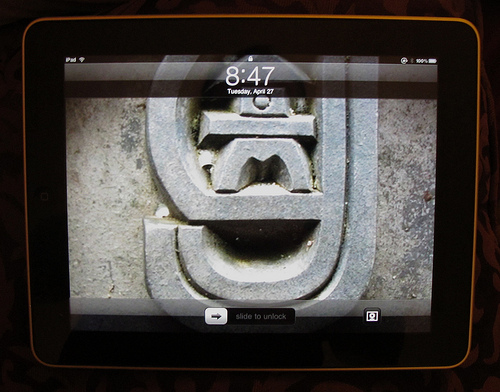 If this happens to you, don’t fear for your sanity; just take off your sunglasses. The future’s so bright, you gotta doff shades.

Comments About The iPad’s Polarizing Effect