The 3G iPad is in buyers’ hands, including mine and those of TidBITS Managing Editor Jeff Carlson, giving us a chance to drill down into the details of the two simple mobile broadband service plans that AT&T offers. Terms of carriers outside the United States are still unknown.

The two plans are based on consumption of incoming and outgoing data via 3G over a 30-day billing cycle. For $14.99, you get 250 MB; for $29.99, you get unmetered data – a true unlimited offering. Both plans also include unlimited access at AT&T’s 21,000 domestic Wi-Fi hotspots. Each plan automatically renews unless you cancel it, but no long-term contract is required.

If you don’t use the full 250 MB in the first plan during the 30 days, unused bandwidth simply expires; it does not roll over to a subsequent month. There is no penalty for cancellation and you can cancel at any point after a given 30-day period begins, up until the moment that your credit card is charged. (In fact, AT&T says you even have a two-hour grace period after the card is charged to cancel.)

The Cellular Data tab in the Settings app – which appears only on the 3G iPad model – is where you control all your 3G data settings. There is no switch to flip from 3G data down to the older 2G EDGE standard, a feature in the iPhone 3G and iPhone 3GS that’s used to improve battery life or establish a more reliable cellular connection. The iPad does fall back to EDGE if 3G isn’t available (and then down to GPRS in the absense of EDGE, if necessary) – there’s just no manual control for switching it yourself. I have a query in to Apple about this, but it’s likely because using an iPhone for voice over 3G exacts a much higher battery toll compared to the same call over 2G because of the continuous nature of the call, even though it’s
broken up into data packets. Sending pure data over 3G exacts a lower toll than voice.

You don’t need a network connection via Wi-Fi in order to sign up for a cellular plan, which is rather nifty; you just have to be in range of an AT&T network in the United States. With the cellular data connection active, signal strength bars and a network operator appear in the upper left whether or not you have already signed up for a service plan. (The top figure shows an active Wi-Fi connection with AT&T service available; the bottom figure shows the network status after I activated a 3G plan and turned Wi-Fi off manually.)

(One commenter found that, in former Alltel territory in Montana, even though his iPad shows AT&T in the upper-left corner, he is unable to sign up for a plan. Alltel was a regional CDMA carrier purchased by Verizon to acquire customers, but a number of rural markets were spun off to AT&T, which is using the licenses to offer GSM service.)

To set up a data plan, you tap the View Account button. You’re presented with a long screen in which you enter your name, a phone number at which you can be reached (it doesn’t have to be a cell number or an AT&T account), an email address and password for an account, and credit card billing information. You also select which of the two plans you want. You cannot pay for service except with a credit card; Visa, MasterCard, American Express, and Discover are accepted. 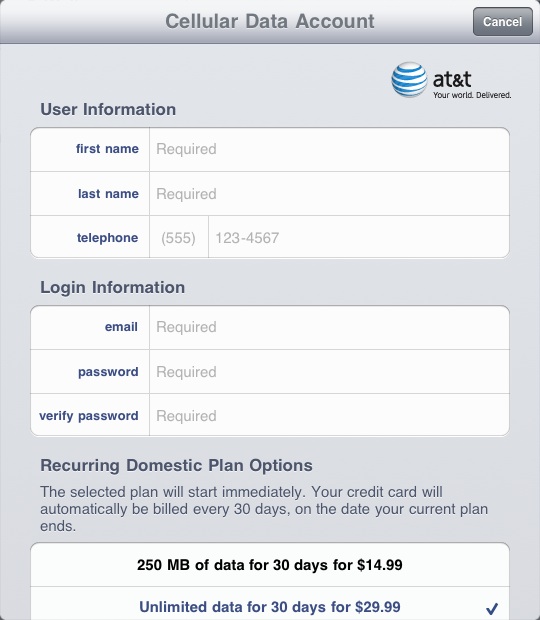 A few days after launch, the sign-up screen was revised to allow a separate address for credit card billing distinct from the service address. The service address, which is optional, must be in the AT&T service area. This change lets those who have a credit-card bill sent to a post office box obtain service.

The account you create is fresh: AT&T doesn’t recognize existing Apple IDs or even AT&T accounts. Your email address is used to send you receipts and service updates, along with warnings about data usage on a 250 MB plan.

After you enter all the required information and click Next, you must accept AT&T’s terms of service. Click Agree, and the next screen shows a summary of charges, and the option to buy insanely expensive international service, too. Click Submit, and a final screen tells you it will take a few minutes for 3G service to be activated. For me, on what was probably a busy day for activation, it took about five minutes. A push notification appears on screen when it’s done. 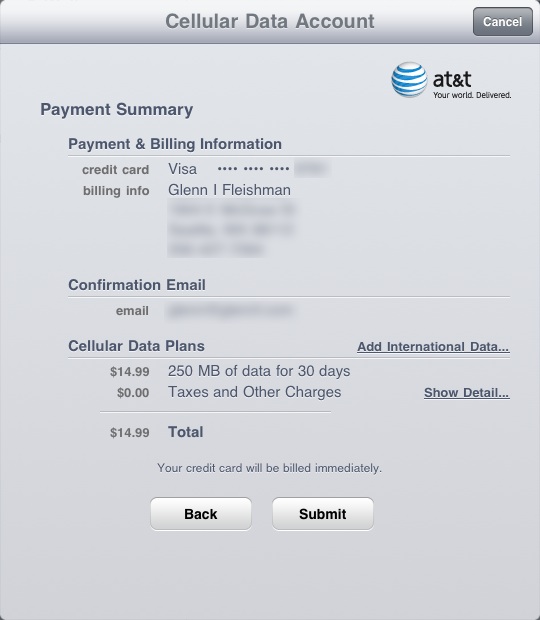 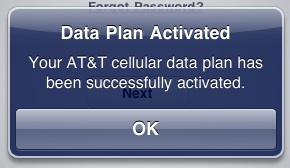 Just as on the iPhone, you can use Airplane Mode at the main Settings level, and a Cellular Data switch in the Cellular Data settings to disable the use of the 3G radio. Airplane Mode disables GPS, 3G, Bluetooth, and Wi-Fi radios, but you can turn Wi-Fi back on manually – useful in planes in which Wi-Fi is available for Internet access.

It wasn’t clear to me before the 3G iPad was released how it would work on networks outside a carrier’s home territory. With the availability of international plans and a Data Roaming switch (to disable non-home network roaming) in the Cellular Data settings area, it’s clear that an iPad will try to use any available network with which AT&T has a relationship worldwide.

Jeff and I both signed up initially for 250 MB plans in order to see what happens when you get close to limits and how practical that amount of data is. As I noted in “Can You Get By with 250 MB of Data Per Month?” (2 February 2010), I found I was using nearly 300 MB of 3G data on average each month on my iPhone 3GS in my first several months of use.

Other streaming video apps aren’t allowed to use the 3G network. Jeff tried ABC’s app, and the iPad popped up an expected error. I wonder if Netflix’s app will be pulled and relaunched with a Wi-Fi only restriction? It wouldn’t take many Netflix users to have a huge impact on AT&T’s data network. 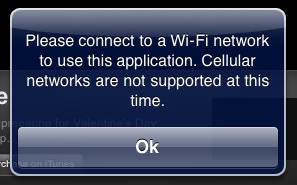 Once you’ve paid for a data plan, you can make changes to it by returning to the Cellular Data settings and tapping View Account. In a colossally irritating decision, AT&T requires that you log in each time you want access to account information or to make changes. There’s no password caching, even over a period of seconds, nor any way to store a password.

When you log back in, you can see various data, such as the billing period, and the amount of data consumed (according to AT&T’s records). Jeff found that AT&T’s information about data consumed has a time lag of 30 to 60 minutes (though that could have been due to first-day traffic as tens of thousands of people all activated their 3G iPads); the Usage pane in the General settings screen shows what the iPad measures at the moment. 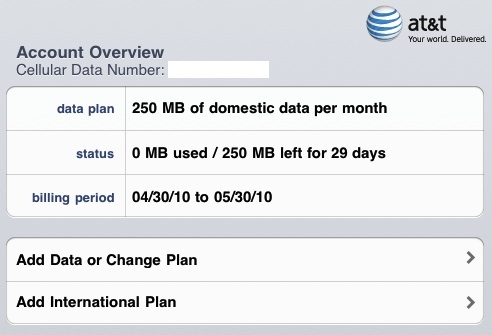 AT&T also displays the phone number assigned to your iPad – that’s right, a phone number. This is presumably because there has to be something in AT&T’s database that’s associated with billing. I tried calling Jeff’s iPad number, and AT&T played a recorded message that explained the party I was calling was unable to accept calls at this time. Or perhaps ever.

You can also make changes to your plan from the Add Data or Change Plan screen. Tap that item, and you’ll see something different depending on your current plan. I opted for 250 MB to start with, so I was offered the chance to buy another 250 MB of data, change to unlimited, or cancel the plan. I presume you see an option to move down to 250 MB or cancel service if you’re already on the unlimited plan. 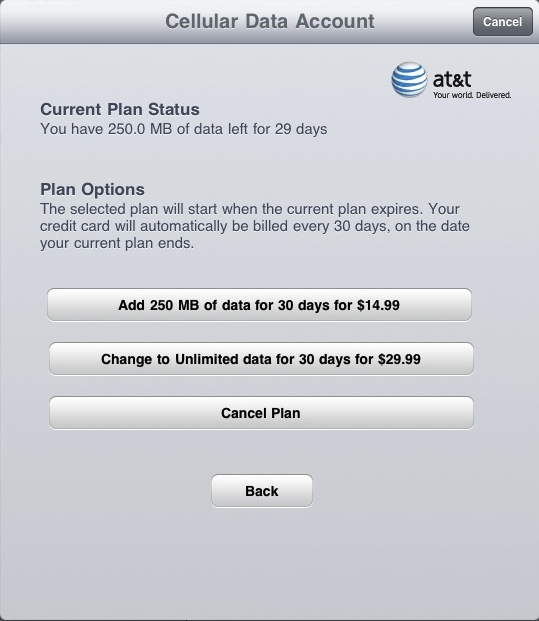 Both options in the screenshot above are slightly misleading, but not in AT&T and Apple’s favor; users might be more likely to make choices that would increase revenue if the results of actions were explained better. While the buttons say one thing, the text above them is more clear: “The selected plan will start when the current plan ends.” This includes cancellation.

For instance, if you “Add 250 MB of data,” and you’re already on the 250 MB plan, no change is made if you don’t run through 250 MB of data within 30 days. It simply keeps you on the same plan. If you run out of data within 30 days, however, the next 250 MB chunk is added to your account, and the billing period resets to count 30 days starting from the moment you switch over into the new data pool.

Likewise, the unlimited plan begins only when you either run out of data on a 250 MB plan before 30 days is up, or the next 30-day cycle starts, whichever comes sooner.

The cancel plan option can work that way, too, but you have two behaviors to choose from. When you tap Cancel Plan, you can either delete the account you used to set up the plan immediately, which disables service, or you can delete it later, which keeps service active until the end of the period or, on a 250 MB plan, earlier if you run out of data within 30 days. (“Later” isn’t quite the right word: AT&T’s text explains that dormant accounts are deleted after 60 days.)

The former option kills any remaining days or data left on your current plan. AT&T doesn’t offer a pro rata refund, so you’re simply giving that service away. The latter option cancels the automatic renewal, but leaves service in place. At the end of the current data usage or 30-day cycle, service halts.

When I tested canceling my service with the cancel-later option, AT&T sent a confirmation email a few hours later with just that language: “You have chosen to cancel automatic renewal of your 250 MB of data for 30 days for $14.99 plan. If you wish to re-establish service, please go to Settings on your iPad to select a new plan.”

If you use 3G service on an iPad intermittently (with more than 60 days between uses), you’re going to wind up creating an account many times, it seems. Here’s hoping AT&T can cope with the same email address being used each time.

The international data plan rates for the iPad are precisely the same as AT&T offers for other phone packages, and aren’t a gotcha – these options are a one-time, 30-day period purchase and don’t renew. You can even pick the start date at midnight Eastern Time (even if you’re in a different time zone) of at least the next day. The usurious rates run from – get this – $24.99 for 20 MB to $199.99 for 200 MB. It remains to be seen if it will be possible to buy a cheap pre-paid MicroSIM when travelling in other countries. (To be fair, AT&T is paying enormous fees to its international partners, too, just not that enormous.)

Apart from the international data plans, AT&T’s 3G service options are rather remarkable, with unusual elements related to pricing, extending service, upgrading, and cancellation that make it flexible enough for occasional use but affordable for regular use. Careful about that streaming video, though.

[Editor’s note: The behavior around halting service was revised after receiving more information from readers and a commenter about the immediate cancellation option. Information about the new service address portion of the sign-up process was also added.]