After significant effort, we’re pleased to announce the opening of the TidBITS Facebook page. It’s nothing fancy, largely because there isn’t much fancy that can be done on Facebook. Nonetheless, if you click the Like button at the top of the page, you’ll see our headlines and article summaries interspersed with the rest of your news feed items. Click a headline link and you’ll pop over to the full article on our site. It’s simple, yet effective, and if you enjoy using Facebook to keep up on what’s happening, I encourage you to connect with TidBITS via the Like button. 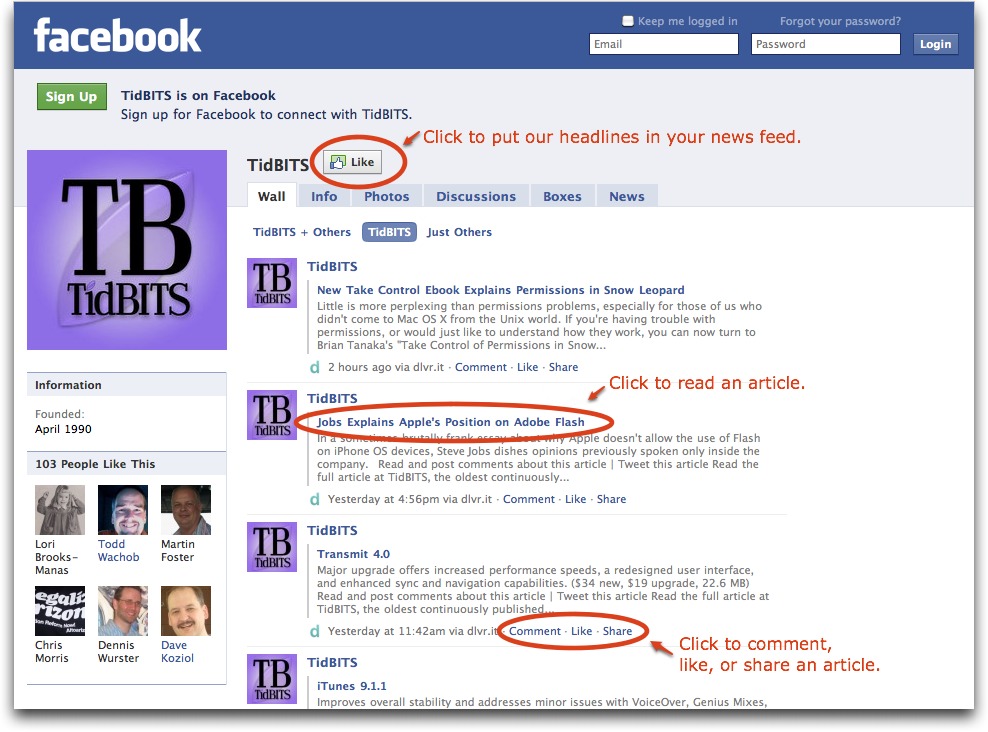 You can also leave comments on any post, click the Like link for a post if you liked it, and use the Share link to share it with your Facebook friends. We’d prefer if you left comments on our site using the TidBITS Commenting System, so they’re linked with articles and so we can more easily reply, but we’ll try to check in on the TidBITS page to respond to comments as appropriate.

Setup Tribulations — If you’re interested in what we went through to get this set up, the problems fell into two basic categories: accessing our RSS feed and creating reasonable graphics.

Although there are a lot of Facebook apps that promise to bring an RSS feed into Facebook, most of them didn’t work with a fan page (now called a business page) when I started this project. The process of accessing a Facebook app, configuring it with appropriate RSS information and Facebook permissions, and then waiting for our RSS feed to update so I could see if it worked was slow, awkward, and incredibly frustrating.

Eventually I came across dlvr.it, a Web site and Facebook app designed to publish RSS feeds to social networking services, including Twitter and Facebook. I first switched the TidBITS Twitter account to use dlvr.it instead of the Twitterfeed service we had been using but which had suffered some growing pains. When that worked out well, I started trying to use dlvr.it to feed TidBITS headlines and summaries to my newly created TidBITS Facebook page.

That was more problematic, but dlvr.it’s extremely responsive technical support helped with a few troublesome areas (most of which were Facebook’s fault, or the result of Facebook’s nearly impenetrable interface for setting up business pages), and eventually I got the feed importing properly.

Unfortunately, it was ugly as sin. Initially, dlvr.it grabbed a random graphic from our pages (usually the QR code; see “Tag, You’re in 2D!,” 1 October 2009) to use as the post’s thumbnail, which appeared next to the profile thumbnail for each post. Luckily, a few weeks ago, an update to dlvr.it gave me additional control over thumbnails on Facebook, so I was able to eliminate per-post thumbnails, leaving just the profile thumbnail (click Older Posts at the bottom of the TidBITS Facebook page to see examples of this ugly thumbnail duplication).

But our problems weren’t over yet. I had tried to use our standard TidBITS logo for the Facebook page’s profile picture, but Facebook really wants a square image there, to the extent that it trims rectangular profile pictures into squares when displaying them as thumbnails (I could never find any specs on image sizes or aspect ratios). After many attempts, we finally gave up on our standard logo entirely and created a square logo that worked for both the large profile picture and the truncated thumbnails.

Regardless of this fuss, everything seems to be working well now, and dlvr.it even reports click-through stats for each social networking service and for each item (currently quite low for Facebook, since so few people know about it now). So if you’re interested in setting up a Facebook business page and populating it at least in part from your RSS feed, I highly recommend dlvr.it.

Comments About TidBITS Now on Facebook Thanks to dlvr.it