We’ve come a long way since the dark days of 1997, when Michael Dell said that if it were up to him, he’d “fix” Apple by shutting the company down and giving the money back to shareholders. I joked in our April Fools issue this year that Apple could now buy Dell with cash, given that Apple has more than $40 billion stashed away, and Dell’s market capitalization is well under that ($26 billion at the moment; see “What Apple Could Do with $40 Billion,” 1 April 2010).

It was a cheap joke, of course, but I was reminded of it when the news broke last week that Apple’s market capitalization has equaled Microsoft’s. Put simply, market cap is a company’s stock price multiplied by the number of shares, and thus reflects what the public considers the company to be worth. Needless to say, it changes quickly with the stock price, so although Apple’s market cap surpassed Microsoft’s briefly, the numbers have flip-flopped again, putting Microsoft ahead by a hair as I write this.

More interesting than the horse race of who’s ahead at any given moment is the long term view, in which you can see just how far Apple has risen, and how far Microsoft has fallen. It’s interesting to note Apple’s nearly flat market cap growth from 1999 through 2003, and to think about how the iPod and iPhone and now iPad have helped goose the stock price to the point where Apple’s market cap is exceeded significantly in the U.S. by only ExxonMobil’s. (As an aside, the chart below comes from YCharts, an extremely slick Web site for viewing financial data; it’s well worth a look.) 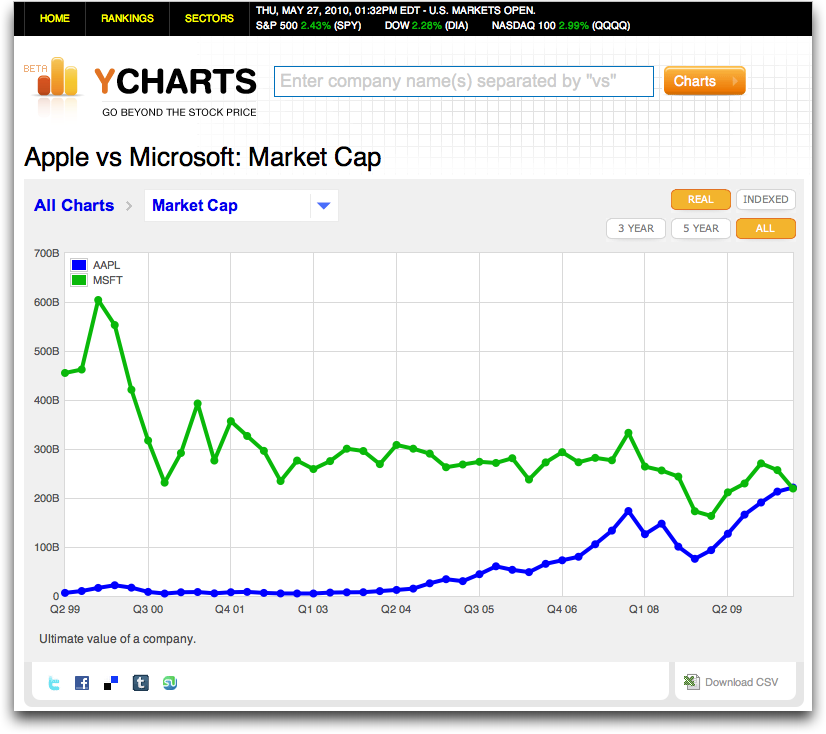 Perhaps even more telling is Apple’s enterprise value, which goes beyond market cap to take into account cash, debt, preferred stock, and more when calculating the market value of a business. Apple is ahead of Microsoft on this metric (at least according to the YCharts data; enterprise value can be a bit tricky to calculate because of how Apple accounts for cash), but it’s amazing to see how significant Apple has become in comparison with other mega-corps.

In short, we’re not in Kansas any more, Toto, and the Apple of today is a very different – and much more powerful – company than in the early days of the Macintosh.

Comments About Apple Catches Up With Microsoft in Market Cap