Steve Jobs wryly opened his description of the new iPhone, called the iPhone 4, with a reference to the recently lost or stolen prototypes: “Now, some of you have already seen this.” But he continued, “Believe me, you ain’t seen it. You gotta see this thing in person.” (Apple couldn’t name this fourth generation of the iPhone the “iPhone 4G” because that would confuse buyers who are hearing about 4G cellular data networks, such as WiMax and LTE, that are starting to appear around the world; the new iPhone does not include such 4G communications capability.)

The new iPhone 4 definitely has a blockier design than the first three generations – Jobs described it as being like a beautiful classic Leica camera – but at 9.3 mm, it’s also 24 percent thinner than the previous iPhone 3GS model. This will mitigate the flattened edges, which contain embedded antennas around the entire case for Bluetooth, Wi-Fi, and GPS, and for several cellular frequency bands (GSM and UMTS). 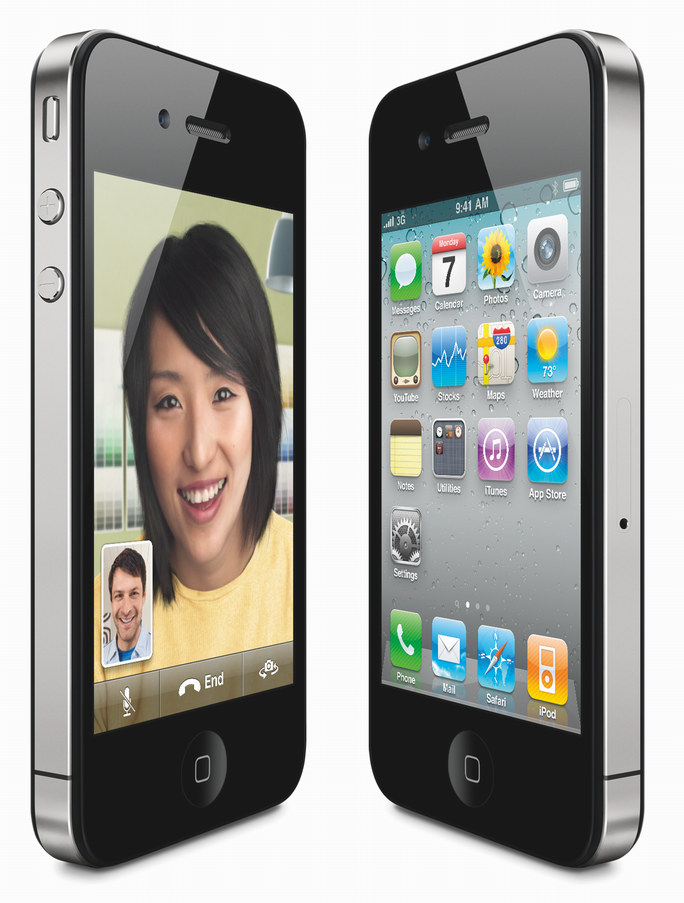 The iPhone 4 sports a revised 3.5-inch screen with four times as many pixels (960 by 640), providing an intensely dense display. Apple has dubbed this a “retina display,” a term that appears to be of the company’s own coinage. With 326 pixels per inch, Jobs said the display will exceed the retina’s ability to discriminate individual pixels, which, he said, maxes out at 300 ppi at a distance of 10 to 12 inches (25 to 30 cm). The contrast ratio on the screen is 800 to 1, which is four times higher than the iPhone 3GS. The screen also incorporates an LCD using IPS technology, just as on the iPad, to provide a far greater range of acceptable viewing angles.

Existing iPhone apps will still work at the same scale, with iPhone OS 4 – now called iOS 4 – rendering type and other elements at four times the density without any rework required by developers. Developers can later take advantage of the denser display, of course. (This begs the question as to why Apple couldn’t have rendered interface elements and type smoothly at twice the size on the iPad. It’s possible such a feature wasn’t ready in iPhone OS 3.2 for the iPad.)

Also new is a front-facing camera, used for FaceTime video conferencing, and a second camera on the back with an LED flash. A second noise-canceling mic has been added at the top of the iPhone to complement the one at the bottom near the speakers; some Android phones have used a similar design to improve voice quality in loud environments.

It’s a bit of a surprise that the iPhone 4 is only available in 16 GB and 32 GB capacities. The iPad has a 64 GB option for both networking models, but clearly it was too tight a fit to squeeze in a 64 GB memory module. Jobs said during the announcement that components were tightly packed.

Networking — Apple has upgraded the iPhone 4’s networking specs, adding 802.11n, though only in the 2.4 GHz band. The iPad includes 2.4 and 5 GHz Wi-Fi support, but it may have been too difficult to shoehorn a second radio and supporting antenna into the diminutive iPhone 4.

On the cellular data side, the iPhone 4 is still limited to HSDPA 7.2 (raw 7.2 Mbps downstream) despite many network operators’ deployment of HSDPA rates of 14 and 21 Mbps worldwide. AT&T plans an HSPA+ (21 Mbps) network later this year, and T-Mobile already offers one in parts of the United States.

The iPhone 4 still is only a “quadband” phone, which means it works using any of four broadly supported frequency bands on GSM networks worldwide, but apparently lacks the specific support necessary to function on T-Mobile’s 3G network at speeds above EDGE (2.5G). Jobs made no mention of a Verizon Wireless version of the iPhone 4, a top wishlist item for many people who are dissatisfied with AT&T.

The iPhone 4 will use a micro-SIM, just like the 3G model of the iPad, which makes it somewhat more difficult for people with multiple phones to swap accounts among them.

Cameras — The new backside camera has been bumped to 5 megapixels with an LED flash. A 5x digital zoom is also available to the iPhone 4 as well as the iPhone 3G and 3GS via an iOS 4 update. But Jobs pointed out that megapixels are for suckers (although the company trumpets the 5 megapixel stat on its Web site); you want to make sure that you can capture the greatest, least-noisy range of light on sensor elements, and he claimed the new camera does so.

The camera’s sensor array, which features backside illumination, has sensor elements the same size as the 3 megapixel camera in the iPhone 3GS, and has increased the area of the sensor overall. Increasing the sensor’s area means that less light passing through the lens falls proportionately onto each element, requiring increased sensitivity to measure light especially with either a low effective shutter speed (to capture motion), or when it’s dim. (This may seem counterintuitive, but only a finite amount of light passes through a lens; a greater area means fewer photons on each portion of that area.)

The backside camera can also record video at a whopping 720p (a high-definition video measurement with 720 pixels across the shortest dimension) at 30 frames per second. This puts the video features of the Flip HD and Kodak HD cameras into an iPhone. The video recording feature now includes tap-to-focus, which was already available for still images in iPhone OS 3 for the iPhone 3GS; tap to focus will be added to video for the 3GS via iOS 4. The front camera offers VGA (640-by-480 pixel) recording at 30 fps.

The iPhone 3GS introduced basic video clip trimming, but you needed to bring the clips into a video editor on the computer to do anything more. The upcoming iMovie for iPhone ($4.99, available via the App Store) brings full video editing to the small screen. You can add several video clips to a project; trim their lengths using cropping handles at the clips’ edges; and add transitions, titles, music, and photos (the latter supports customizable Ken Burns panning effects). The app also includes five themes, which add styled text, transitions, and music that tie the movie together. The finished movie can be uploaded to a MobileMe Gallery or YouTube, or shared via email or MMS in one of three resolutions: Medium (360p), Large (540p), and HD (720p). 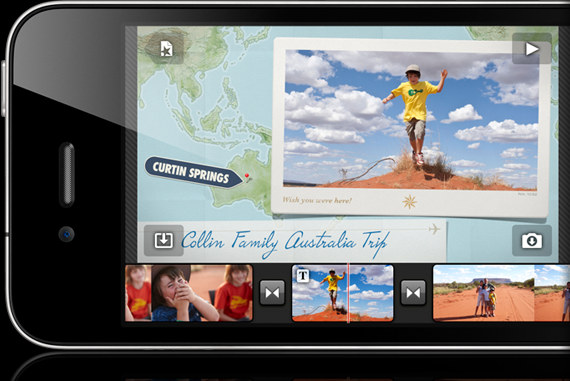 A few questions jump out, which we won’t know until we can use the app ourselves. Although the app is clearly designed to use videos shot on the iPhone 4, will we also be able to bring other clips in as source material? And will that include HD footage as well? Apple’s site mentions that finished movies can be synced to your computer, but based on the information posted, it doesn’t appear as if you can take a project created in iMovie for iPhone and edit it further in iMovie on the Mac.

Other Hardware — Apple has bumped up the internal microsensor count in the iPhone 4, adding a gyroscope to the existing accelerometer, proximity sensor, ambient light sensor, and compass. This gyroscope allows three axes of motion sensing (pitch, roll, and yaw), and will improve gaming, but has some effect on programs that rely on precise positioning, too. While an accelerometer tracks changes in movement, a gyroscope working in combination with other sensors will dramatically improve sensitivity, especially in orientation. Apple says the gyroscope plus accelerometer combine to sense six axes.

A revised battery, in conjunction with the better power management of the A4 chip, will extend talk time by 40 percent – up to 7 hours from the previous upper limit of 5 hours. Additionally, users will be able to enjoy up to 6 hours of 3G browsing, 10 hours of Wi-Fi browsing, 10 hours of video playback, 300 hours of standby, or 40 hours of music.

Perhaps the least surprising news is that the iPhone 4 uses the A4 processor, the same one found in the iPad, developed in-house by Apple.

Of course, with mobile phones, upgrading is never simple, due to two-year contract commitments. Luckily, AT&T has said it will allow any customer with a contract expiring in 2010 to upgrade to the iPhone 4 – which for some users would mean upgrading 6 months earlier than normal.

Comments About New iPhone 4 Still Had Secrets to Reveal