For those of us who remember the pricey megabyte-sized hard disks of yesteryear, the cost and capacity of today’s terabyte-sized drives continue to amaze. And yet, our data needs continue to outpace our storage capacities, and modern drives don’t seem significantly more reliable than the drives of the past. But ingenuity offers a single solution to both problems – a device that combines multiple drives to increase storage capacity and reliability. This approach, called RAID, for redundant array of inexpensive disks, divides and replicates data among multiple drives such that any one of them can fail without any loss of data.

But implementing RAID is often expensive and fussy, requiring identically sized disks and complex management software. To address those concerns, Data Robotics developed the BeyondRAID technology, which removes limitations in traditional forms of RAID, and implemented it in the Drobo storage devices. With a Drobo, you can install multiple drives (starting with 2 and expanding up to 4, 5, or 8, depending on the model) of any size or speed, and from any manufacturer. The Drobo automatically combines them into a single volume (up to 16 TB). The capacity of that volume will be roughly the total of all the installed drives, minus the size of the largest one and some overhead (Data Robotics has
capacity calculators that show exactly how much usable space you get with different drive configurations). But here’s the magic. In exchange for that drop in total capacity, you can – at any time – remove any drive and insert another without any loss of data or interruption of service. 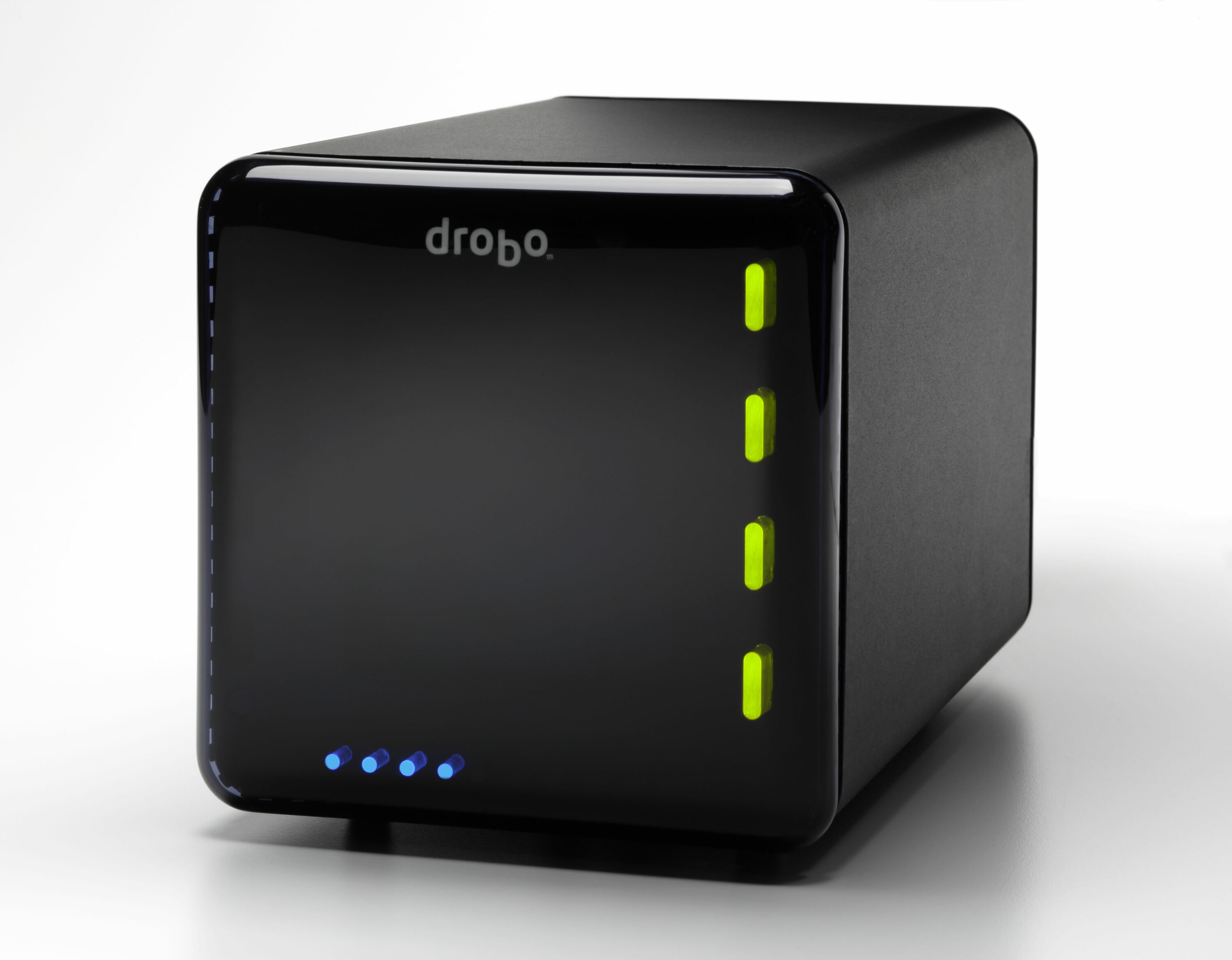 There are two basic reasons you might want to do this – drive failure and capacity upgrades. As we all know, hard drives die, and usually at the most inconvenient time. If that happens with a drive in a Drobo, fixing the problem is just a matter of removing the dead drive and replacing it with a fresh one. Similarly, it’s equally known that drives keep getting larger, and if you initially populated a Drobo with some old 250 GB and 500 GB drives you had lying around, as those drives die or as you need more space, you can pop in a couple of 1 TB or 2 TB drives and radically increase your storage pool, all while retaining the protection against drive failure. (And let’s be clear, RAID-like protection against drive failure is not the same
thing as backup; a Drobo won’t protect against fire, theft, or even a deleted file.)

Much more could be written about the Drobo, but the folks at Data Robotics, the makers of Drobo, have put together videos of Drobo users at Macworld 2010 describing why they love their Drobos, how they use them, and what they store on them. Several members of the TidBITS staff, including Jeff Carlson and Rich Mogull, swear by theirs as well.

If you want to win your very own four-bay Drobo, worth $399, enter at the DealBITS page. (Unlike most of our drawings, we’re giving away serious hardware here, so we won’t be doing referral entries.) All information gathered is covered by our comprehensive privacy policy.