While night owls in the United States were focused on pre-ordering the new iPhone 4 in the wee hours of 15 June 2010, Apple released a spiffy, redesigned Mac mini, a substantial upgrade to the company’s least expensive desktop Mac. 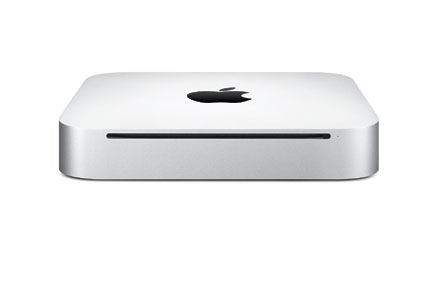 Encased in aluminum and standing just 1.4 inches (3.6 cm) tall, the new Mac mini features a number of improvements. Faster processors – 2.4 GHz or 2.66 GHz Intel Core 2 Duo – with 3 MB of L2 cache and a 1066 MHz frontside bus anchor the engine. The entry-level Mac mini comes standard with 2 GB of RAM, but can now be upgraded to 8 GB of RAM.

Graphics processing is provided by an integrated Nvidia GeForce 320M with 256 MB of memory, the same chip used in the MacBook. You can choose between a 320 GB or 500 GB hard drive. An 8x slot-loading SuperDrive is standard.

Acknowledging that some owners use the Mac mini as an entertainment hub, Apple outfitted the new model with an HDMI port in addition to a Mini DisplayPort, making it possible to connect an HDTV without intermediary adapters. The HDMI port also supports multichannel audio output. (An HDMI-to-DVI adapter is included in the box if your display needs are more computer-centric and range beyond the use of a Mini DisplayPort-savvy monitor.) A new SD card slot accepts memory cards from digital cameras. 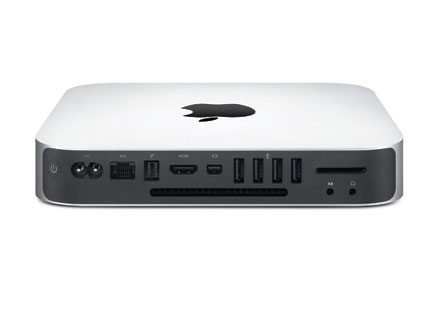 Networking options remain the same: 802.11n and Bluetooth 2.1 + EDR wireless, and gigabit Ethernet. The Mac mini also includes one FireWire 800 port, four USB 2.0 ports (having traded one of the previous five USB ports for the SD card slot), and audio line in and out ports. Apple also notes that the Mac mini supports the iPhone headset with microphone.

Apple relocated all the external parts of the power supply into the Mac mini, removing another ungainly power brick from the tangle of cords that lives under most people’s desks. On the downside, some worry that this will cause the Mac mini to run hotter; heat problems have plagued some of Apple’s devices of similar form factor, such as the Time Capsule.

Even better, you don’t need to be savvy with a putty knife to upgrade the RAM: a round panel on the bottom of the Mac mini rotates off to expose the two DIMM slots. (Accessing the hard drive appears to be just as difficult as earlier models, however, although an external FireWire hard disk will likely provide a better price/performance ratio and more flexibility anyway.) 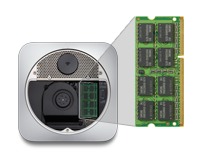 In addition to increasing the Mac mini’s specs and features, Apple upped the base price. The default configuration now costs $699 and includes the 2.4 GHz processor, 320 GB hard disk, and 2 GB memory; the last model, introduced in September 2009, cost $100 less.

The Mac mini is also available in a $999 Snow Leopard Server configuration, which removes the SuperDrive in favor of a pair of 500 GB hard drives spinning at 7200 rpm, pushes the base processor to 2.66 GHz and the memory to 4 GB, and ships with an unlimited user license for Mac OS X Server Snow Leopard. The server software by itself would cost $499, making this configuration an even better deal than it was with the previous Mac mini model.

Both models are now available.