I was slow off the line to pre-order an iPhone 4 on June 15th, and by the time I called our local AT&T store, they said they couldn’t guarantee delivery on the ship date of June 24th. And, not terribly unexpectedly, they couldn’t take pre-orders over the phone. So I made a special trip down to the AT&T store to pre-order the iPhone and change our calling plan. (Between the new $15 DataPlus plan for 200 MB of data, and a cheaper 550-minute family plan for our two iPhones, we’ll save about $40 per month.)

Once there, however, I learned that AT&T had informed all their employees that pre-orders have been “temporarily suspended,” due to significant failures in back-end systems the previous day. They were, amusingly, writing down names and phone numbers on a pad of paper, and cheerfully promised to call me as soon as the opportunity to place a pre-order returned. Say what you will about AT&T’s network coverage, but my customer service experiences with the company have been universally positive. 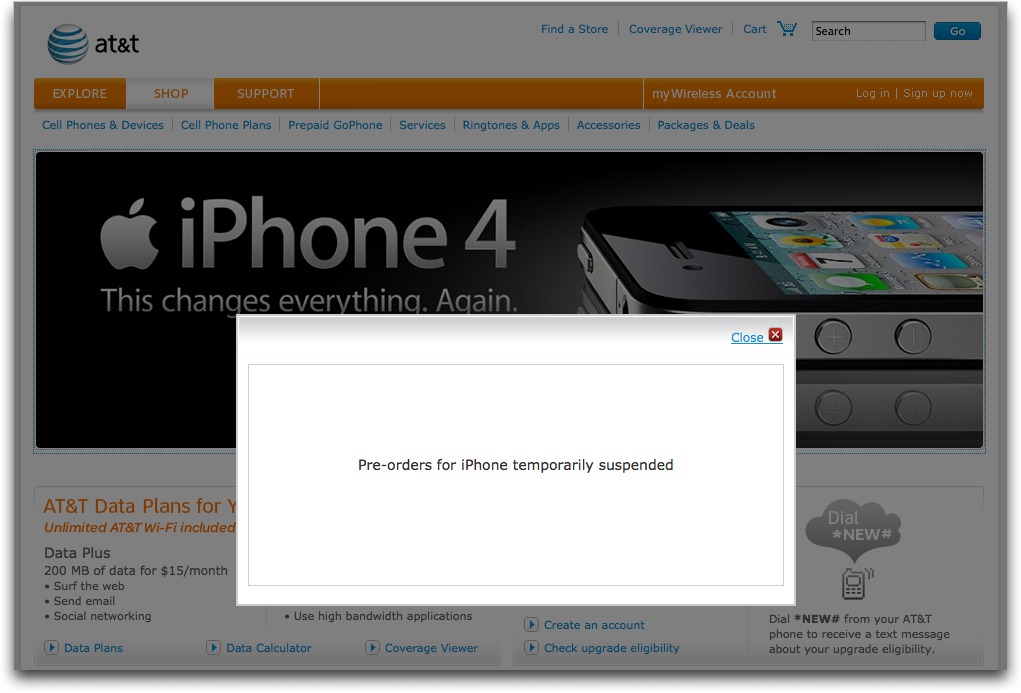 Yesterday Apple and its carrier partners took pre-orders for more than 600,000 of Apple’s new iPhone 4. It was the largest number of pre-orders Apple has ever taken in a single day and was far higher than we anticipated, resulting in many order and approval system malfunctions. Many customers were turned away or abandoned the process in frustration. We apologize to everyone who encountered difficulties, and hope that they will try again or visit an Apple or carrier store once the iPhone 4 is in stock.

Plus, AT&T has said that iPhone 4 pre-orders were 10 times higher than the first day of pre-orders for the iPhone 3GS in 2009. Nevertheless, the AT&T people I talked with said their systems had been upgraded over the weekend before the launch, and an insufficiently tested system may have played a role in the debacle.

Realistically, it’s hard to stress too much about the delay – for most people, a few days here or there won’t make any difference other than in geek acquisition bragging rights.