Google Voice is now available to everyone in the United States, and no longer requires an invitation. The system, which includes a Web site, telephony components, and mobile apps, allows you to obtain a phone number and manage what happens to calls coming into that number or originating from it.

Google Voice includes, at no fee, unlimited incoming voice calls and SMS text messages, as well as unlimited outgoing calls and text messages to numbers in the United States and Canada. For now, Google Voice acts as a switchboard for numbers you already have; it doesn’t include telephony client software.

Calls placed to numbers outside North America are charged at rates comparable to those from Vonage and Skype – a few cents a minute to landlines in developed nations and substantially higher rates to mobile phones everywhere. Text messages are free for you to send from any Google Voice interface, and received messages don’t count against mobile totals if you disable forwarding to your cell phone.

Google Voice can be used from voice.google.com, through mobile apps on several platforms other than the iOS, and via a special mobile Web app that works well in iOS. 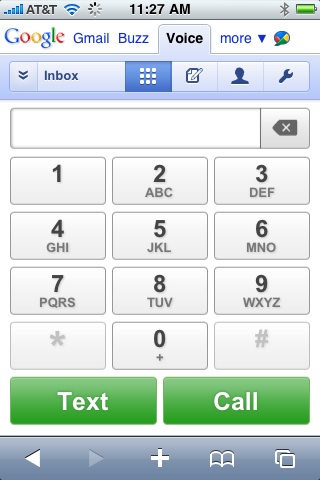 Google tried to get a native Google Voice iPhone app approved by Apple nearly a year ago, but Apple rejected it with AT&T’s participation. The FCC got involved, and Apple said it was reviewing the app, but hadn’t rejected it, while AT&T said it wasn’t involved in the decision. Nearly a year later, the app still isn’t available.

When you sign up for Google Voice, you choose a number, specifying an area code or a text pattern you want the number to spell, in part or whole. You then associate real phone numbers with the account – verified by an automated phone call at which you enter a code – as well as behavior for those numbers. You can associate each of your phone numbers with only a single Google Voice account. 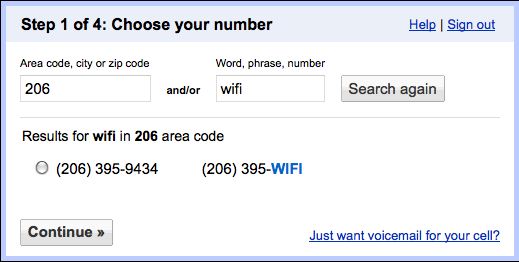 When someone calls your Google Voice number, you can set the system to ring one or more of your phone lines simultaneously. Each line can be set up with rules for when it rings, such as time of day or day of the week. You can also use Caller ID to recognize incoming callers, and group them for specific behavior, such as sending directly to voicemail. 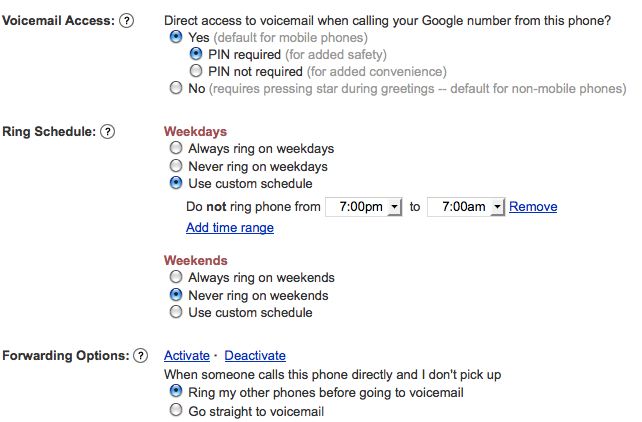 Along with audio voicemail, Google Voice also includes voicemail transcription, which I’ve found erratic, although interesting. I haven’t received a single voicemail that was transcribed close to correctly, but the system keeps improving (and asks for your help in improving it).

Google provides instructions for having its system handle your mobile phone’s voicemail, too, if you want to unify all your voicemail into Google Voice. (This feature works only with Alltel, AT&T, Cricket Wireless, MetroPCS, Sprint, T-Mobile, US Cellular, and Verizon, and only if your plan supports conditional forwarding, which isn’t true of T-Mobile prepaid plans.)

You can also enable call screening, a feature that requires callers to state their name, and then rings you, with an automated voice providing Caller ID and the name the caller spoke. You then have the option of how to handle the call, including sending the caller to voicemail while you listen to them record a message. (This was one of those crazy features that made the service stand out when it was in testing as GrandCentral, before Google purchased the firm developing it. It’s like having an old-fashioned answering machine on your mobile phone.)

Google Voice has an option I use frequently to avoid toll charges from my home landline number, which we have set for limited service. Both my father and my wife’s parents live just far enough away within our state that we either have to make cell calls (less comfortable in the home) or pay long distance toll charges.

Instead, I bring up the Google Voice Web site, click the Call button, enter the phone number I want to call (or select it from the contacts list), and select my home line from the Phone to Ring pop-up menu. (You can also initiate calls by dialing your own number, accessing the voicemail options, and entering the number to call.)

My phone rings, and because this counts as an inbound call, I don’t pay toll charges; when I pick up, Google dials the other end and connects the call. This also works well when you’re somewhere you can’t make a toll call from and it’s preferable or cheaper than using your cell phone.

I also make use of Google Voice’s free text messaging. In the United States, both the sender and recipient of a text message are dinged for the same message, which is even more ridiculous since the nominal cost is, at most, a tiny fraction of a cent. (See “When iPhone Pushes, Text Message Fees Fall,” 9 April 2009.)

I have a 200 SMS plan ($5 per month) from AT&T, and when I have occasionally gone over that amount, I pay 10 cents per message for the privilege. Using Google Voice for my half of the communication reduces my cost, as I don’t use the feature to forward SMS to my cell phone; instead, the messages are sent to me via email and I reply via the Web app or Web site. I’m still subtracting from my recipient’s message totals – unless they have unlimited messaging plans – but it’s a way to reduce my costs.

Google Voice is so far available only in the United States. Google’s response to those who try to sign up elsewhere is: “We’re not yet open for users outside the U.S., but are planning to expand our service to additional countries in the future.”

Comments About Google Voice Opens to All Americans