iPad and iPhone owners now have another alternative for mobile broadband. Virgin Mobile has added the MiFi, a portable cellular router that acts as a mobile Wi-Fi hotspot, to its pay-as-you-need-it broadband service. Virgin charges $149.99 for the device without a contract. You can purchase mobile broadband in increments as needed.

Virgin Mobile offers four prepaid data plans: $10 for 100 MB consumed within 10 days, while 30-day usage plans cost $20 for 300 MB, $40 for 1 GB, and $60 for 5 GB. There are no overage fees; you simply add another time-limited plan, just as AT&T does with 3G iPad service offerings. Unused data expires at the end of the period. Virgin Mobile is a subsidiary of Sprint Nextel, operated as a separate entity, and uses Sprint’s network.

The MiFi has become a popular device for frequent travelers who need ubiquitous access to the Internet from multiple devices. A mobile broadband USB modem might plug into a laptop, but then the laptop has to be turned on and sharing set up to enable connections from other devices. The MiFi simplifies that by acting as a cellular data gateway for up to five Wi-Fi devices. 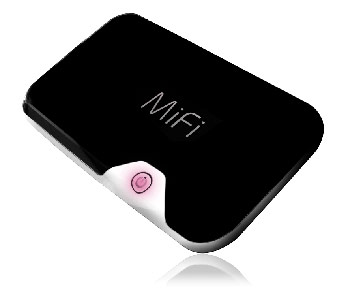 The MiFi supports robust WPA2 Personal Wi-Fi encryption, making it a better choice than a Mac laptop. Apple has bizarrely lagged in allowing its software base station option (System Preferences > Sharing > Internet Sharing) to support only the outdated and useless WEP encryption method.

Previously, only Verizon Wireless and Sprint Nextel offered the MiFi for their EVDO networks. Verizon charges $269.99 without a contract and $49.99 (when purchased online) with a two-year contract. Sprint charges $299.99 without a contract, and nothing at all with a two-year contract. (Novatel Wireless, the firm behind the MiFi, also makes an HSPA version that would work on AT&T’s network, but it’s unclear if it would support T-Mobile’s unique 3G bandwidth setup.)

Both Verizon and Sprint charge $59.99 for a 5 GB combined upstream and downstream monthly cellular data plan, and $0.05 per MB for data above that ($50 per GB), which is egregious given that the data doesn’t magically cost several times as much when you cross that threshold. (The overage fees are a combination of profit center and discouragement to reduce network usage.)

Verizon also offers prepaid, contract-free usage: $15 for 100 MB used within 1 day, $30 for 300 MB used within 7 days, and $50 for 1 GB used within 30 days. Those plans are paltry and expensive compared to Virgin Mobile’s, especially since you’d pay nearly twice as much for the MiFi up front.

Compare these MiFi offerings to AT&T’s tethered smartphone option: the $25 DataPro plan is required, which includes 2 GB of usage within a 30-day period, as is a $20 “because we can” tethering fee from AT&T. Each additional 1 GB used in that same period is billed at $10, making a 5 GB plan cost $75 on a smartphone. Further, tethering limits use to a laptop, although you can share the connection as with a 3G modem. (iOS 4 is required in the United States; carriers in other countries have offered tethering with entirely different terms since iPhone OS 3 was released.)

The 3G iPad can’t act as a host to a tethered iPhone, and its own data plans are quite expensive when you top a few gigabytes. AT&T charges $25 for each 2 GB increment used within 30 days. Consume over 4 GB within 30 days, and you’re paying $75 (three times 2 GB at $25 each) for the privilege.

That’s the level at which Virgin Mobile’s deal for the MiFi looks attractive. One device, quite portable and battery powered, which could feed a Wi-Fi-only iPad ($130 cheaper than the 3G model), an iPhone (which otherwise would be consuming AT&T’s mobile broadband), and a laptop – if you happen to travel with all three.

The MiFi also breaks down limits that Apple imposes on 3G networks. You can use FaceTime over 3G by using a MiFi, because the iPhone 4 only sees a Wi-Fi network. You can also download apps and media larger than 20 MB, although you’d have to balance that with bandwidth costs.

It gets better if you travel with colleagues or family, where you might have multiple iPhones and iPads that could use the same MiFi for Internet service. If you were planning on turning on a DataPro plan and tethering for a month with AT&T when you travel, the MiFi from Virgin Mobile may be a more economical and versatile option.