Here’s a dirty little secret about the iPad: it can be difficult to share. I’ve just gotten my own iPad, and I’m looking forward to being able to use it more than the one that Tonya took over when writing her free “Take Control of iPad Basics” book and editing our other iPad titles.

One immediate benefit is that I can more easily read on my iPad if I’m eating alone, a time when I often read paper magazines. But the ergonomics of reading at the table are poor at best; getting the magazine positioned properly for the light and in relation to my plate can be tricky. By itself, the iPad is, if anything, worse than a magazine, since its rounded back ensures that it never lies firmly on a flat surface.

Clearly, a stand of some sort is essential, and to that end I’ve been testing the iPad Recliner from LapWorks. It’s a two-piece plastic stand that adjusts anywhere from 25 degrees up to 65 degrees. You can position your iPad in either portrait or landscape mode, and either way, the iPad touches only a soft rubber cushion. 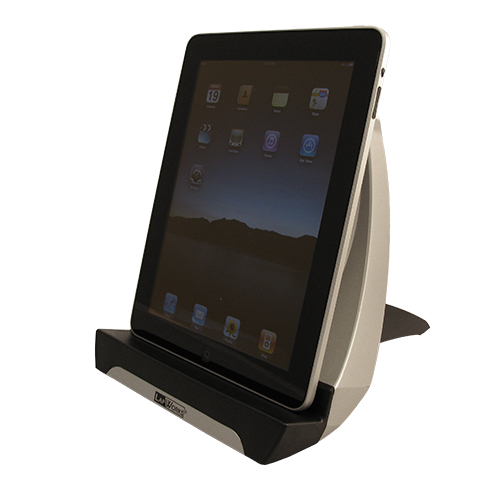 The least obvious part of the iPad Recliner is how to put it together. It ships in a configuration that reduces its overall size to fit in the box, so you must remove a threaded knob, turn the bottom piece around, thread the connecting screw through the single hole in the bottom piece, and reattach the knob. It’s hard to explain, and there are no instructions in the box, but LapWorks founder Jose Calero has a YouTube video that explains how to assemble the iPad Recliner properly, along with some tips on how you can put it together for even steeper angles.

At its 25 degree setting, the iPad’s screen is positioned well if you need to look nearly straight down at it, and you might be tempted to use that position for typing on the iPad’s virtual keyboard as well. Unfortunately, the deep lip on which the iPad sits gets in the way of tapping the Space bar and other keys at the bottom of the keyboard. If you could use a shim of some sort to raise the bottom of the iPad so it was flush with the lip, typing would be significantly easier. On the plus side, the deep lip means the iPad Recliner will hold an iPad in even a fairly thick case.

Increasing the angle to 65 degrees puts the iPad at a good angle for reading at arm’s length and for typing when using a Bluetooth keyboard. Remember, you can set it to any angle between 25 and 65 degrees, which is important for avoiding glare and finding just the right angle, something that’s not possible with many iPad stands.

The iPad Recliner is fairly deep, ranging from 8.75 inches (22.2 cm) to 12.5 inches (31.8 cm) depending on angle, so it may not fit on a shallow shelf, although it will be fine on a desk, table, or counter. It has two rubber feet that prevent it from sliding around on a hard surface, which is good, but you won’t want to hold it on your lap in any way – the hard plastic is uncomfortable.

There’s nothing iPad-specific about the iPad Recliner; the name on the device itself is just “Recliner,” and you could easily put a Kindle, Nook, or other tablet-sized device in it as well. It even holds single sheets of paper well, though not paper magazines, which flop around too much.

Overall, I like the iPad Recliner, it works as advertised, and it’s cheaper than many other iPad stands (see Dan Frakes’s reviews at Macworld for others). But I’m not ecstatic about it – the iPad Recliner is perfectly functional, but it’s not the sort of thing I’d leave out as a decorative object without its iPad. 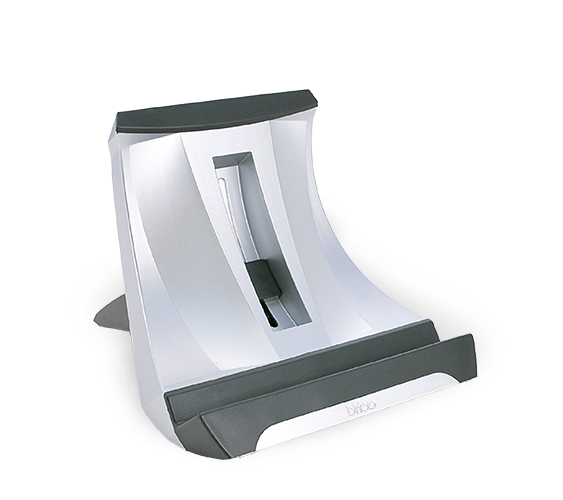 Comments About Read at Multiple Angles with the iPad Recliner