Matching the height and depth of the Apple Wireless Keyboard, the Magic Trackpad enables gestures like swiping, pinching, and rotating items in programs that support them. Apple’s Web page notes that the “entire surface is a button that clicks,” and according to Dan Frakes at Macworld, the trackpad clicks via buttons in the feet. 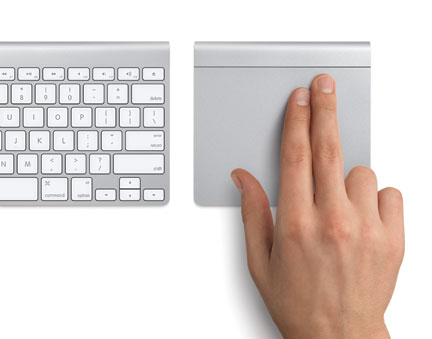 The trackpad communicates with the Mac via Bluetooth and is powered by two AA batteries. It also reduces its power consumption when inactive, and includes an On/Off button.

The Magic Trackpad and Multi-Touch Trackpad Update 1.0 (75.09 MB) enables the Multi-Touch controls (and offers options for choosing which ones to activate) in the Trackpad preference pane. It also provides inertial scrolling and three-finger drag gesture support to a number of MacBook and MacBook Pro models.

The Magic Trackpad costs $69 and is available now.

Apple Battery Charger — Here’s something unexpected. Apple also unveiled the Apple Battery Charger, a $29 charger that includes 6 rechargeable AA batteries and powers two at a time. Apple claims the Apple-supplied NiMH batteries have up to a 10-year lifespan, with a self-discharge rate that retains 80 percent of their original charge even after sitting unused for a year. The charger works with other companies’ NiMH batteries, too. 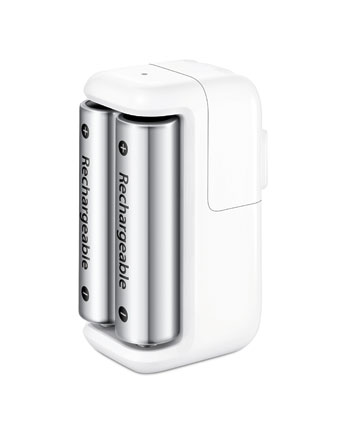 What sets Apple’s charger apart is the amount of power it uses once its batteries have been charged: 30 milliwatts (mW), compared to 315 mW for other chargers. The reduction in the “vampire draw,” as Apple terms it, promises to reduce your house or office’s overall energy consumption. The Apple Battery Charger is available now.