While Safari has always supported plug-ins such as Flash Player and has been extensible in unsupported ways, Safari Extensions are different. Most importantly, they’re more secure due to requiring signed digital certificates from Apple that ensure any updates are coming from the original developer and that no one is tampering with them. The extensions are also “sandboxed,” meaning they can’t communicate with a user’s system beyond Safari, and can’t provide information to Web sites not specified by the developer. Safari Extensions are also arguably easier for developers to build, as they rely on open HTML5, CSS3, and JavaScript Web standards, and Apple has provided developers with an Extension Builder application. Finally, they’re better
supported by Apple in their management and installation (hence the easy one-click installation).

Apple’s recent press release announcing the Safari Extensions Gallery highlighted a few of the new extensions. Among them is an Amazon wish-list extension that enables users to add items from any Web site to an Amazon wish list; a Bing search engine extension that can provide potentially relevant information when any given text is selected, such as a map appearing when an address is highlighted; and a Twitter extension that enables users to tweet directly from Safari when stumbling across content on the Web. 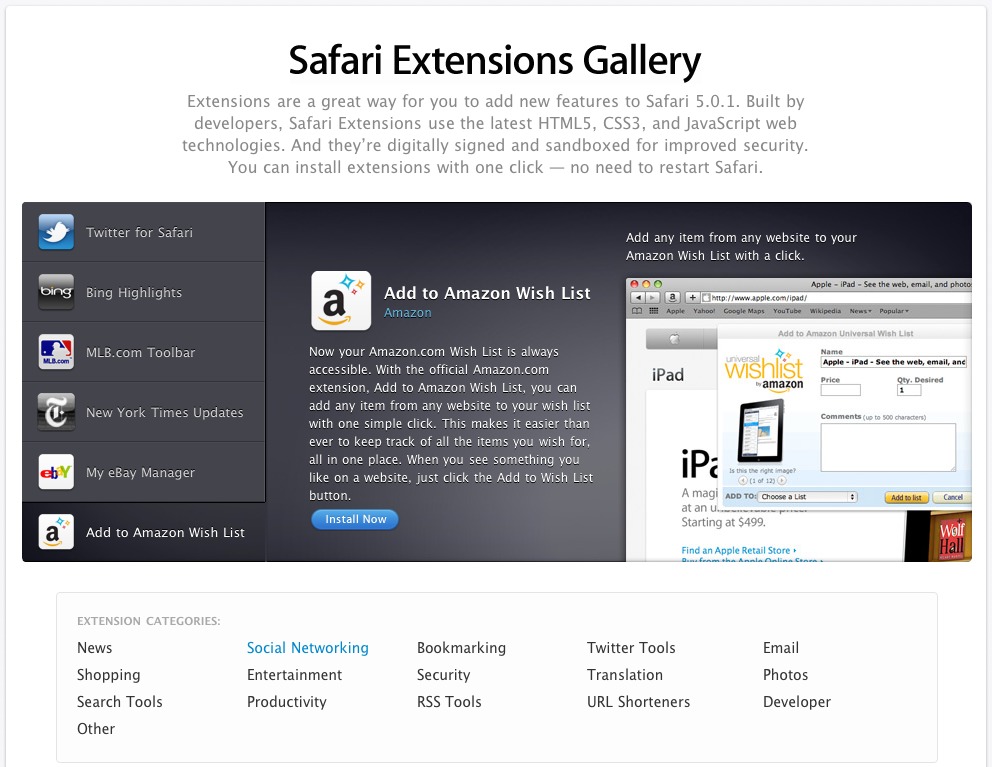 More interesting to us are some of the productivity extensions, such as SafariRestore, which automatically restores your previous browsing session when launching Safari; Sessions, which goes one step further to provide a browsing history manager; and AutoPagerize, which turns lengthy multiple-page Web articles on sites like Ars Technica and the New York Times into a single scrollable Web page.

Safari 5.0.1 also adds a number of smaller features and addresses a handful of stability issues. Improvements include more precise Top Hit results in the address field, more accurate timing for CSS animations, enhanced stability when triggering the keyboard shortcut for Safari Reader, and better stability when scrolling in MobileMe Mail. Problems that have been addressed include a number of site-specific issues, such as displaying multi-page articles from Rolling Stone’s Web site in Safari Reader and printing boarding passes from American Airlines’ Web site. Also, Google Wave compatibility with 32-bit systems has been repaired, a bug preventing Safari from launching on Leopard systems with network home directories has been fixed, and a
bug causing DNS prefetching of results to overwhelm certain routers has been addressed. A full list of changes is available on Apple’s Web site.

The update also fixes several critical security vulnerabilities. These security issues are mainly related to WebKit’s handling of various Web elements, malicious RSS feeds, and AutoFill. They could lead to arbitrary code execution, files being sent to remote systems, and, in the case of AutoFill, information being disclosed to malicious Web sites without any user interaction. This final fix addresses the vulnerability identified recently by Jeremiah Grossman, so it’s once again safe to turn AutoFill on. Safari 5.0.1 is a 37.57 MB download via Software Update and the Apple Support
Downloads page.

Finally, Apple has also released Safari 4.1.1 for Mac OS X 10.4 Tiger users, including many of the same feature updates, stability improvements, and security fixes – though it does not include support for Safari Extensions. It’s also available via Software Update and the Apple Support Downloads page as a 29.53 MB download.