Web browsers like Firefox, Chrome, and even Internet Explorer have offered support for add-ons and extras since soon after their respective releases. Apple’s own Safari browser, however, took seven and a half years to gain support for extensions, which arrived with the recently released Safari 5.

Apple launched its own directory of Safari extensions last month; before then, Jonas Wisser’s Safari Extensions blog was the easiest place to find new extensions – but both sites can feel a bit overwhelming. There are hundreds of Safari Extensions, with more arriving every day, so it can be hard to find the signal in the noise. I’ve already dug up several extensions that vastly improve my own daily Internet surfing – perhaps they can help you, too.

YouTube5 — Connor McKay’s YouTube5 is one of my favorite Safari Extensions – but don’t judge the extension by the creator’s Web site. Enabling this extension dramatically reduces the number of Flash videos you’ll encounter on the Web. YouTube videos, whether on YouTube itself or embedded elsewhere, will no longer use Flash; rather, they will leverage the magic of HTML5, which should mean much lower processor demands (and thus less power consumption) for your Mac. 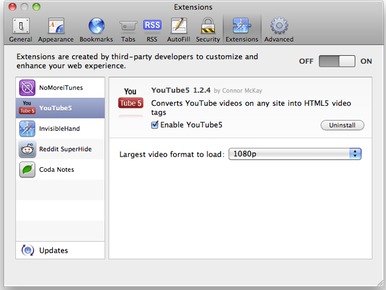 The YouTube5 extension includes a single preference: you can choose the largest video format the extension should load when available: 360p, 720p, or full high-definition 1080p.

InvisibleHand — Created by the eponymous shopping site, the InvisibleHand extension makes me happy because I love saving money. Before I make a purchase online, I spend considerable time searching to make sure I’m getting the best deal possible. Or, at least, I used to.

With InvisibleHand installed, you see a small yellow bar across the top of some shopping sites. That bar tells you how much you could save if you instead purchase that product from another source (it also tells you if you’re already at the retailer with the best price). For example, when I looked at the iPod touch on Amazon.com, InvisibleHand suggested that I could buy it elsewhere for $37 less – a savings of more than 20 percent.

When InvisibleHand works, it’s awesome, and can save you some serious coin. Unfortunately, the extension does have a few weaknesses: You can’t configure which other online retailers it should search, so if you’d prefer not to see, say, eBay price comparisons, you’re out of luck.

NoMoreiTunes — Another Safari extension that works to eliminate one major Web-browsing annoyance goes by the catchy name of NoMoreiTunes. Whether you’re clicking on an iPhone or iPad app link, or an iTunes song or movie, you always know what to expect: After the Apple-hosted preview page loads, then iTunes opens, and it (slowly) loads the content you were after.

Well, that’s what happened in the era before NoMoreiTunes. Now, when I click those links, I see Apple’s preview page for the given content (like this one) – and iTunes remains undisturbed. It’s delightfully refreshing. It would be nice if Apple would code its iTunes Preview Web site so it doesn’t pop open iTunes anyway, but until Cupertino comes to its senses, NoMoreiTunes makes a great sanity restorer.

[Editor’s note: It appears that Apple has indeed come to its senses and changed this behavior on the iTunes Web site after the initial publication of this article, so there’s no need for NoMoreiTunes any more. -Adam]

Ultimate Status Bar — Safari’s status bar – the strip at the bottom edge of your browser window that displays a URL when you hover the cursor over a hyperlink – is off by default, but once you turn it on, it’s always there. In some browsers, like Google Chrome, the status bar appears only when necessary when you move your cursor over a link.

Ultimate Status Bar emulates that behavior, freeing a few precious vertical pixels to show you more of your Web pages. On top of that, the extension offers numerous benefits over Safari’s default status bar. For one thing, you can change its appearance; the extension includes ten themes, from the subtle Classic to the technicolor, unicorn-laden Sparkle. Beyond that, it shows the destination URL’s favicon and even expands shortened URLs like those you’d find on Twitter, so you can know where you’re going before you click. And the extension can even show the size of a linked file to download.

A promising competitor called Gentle Status Bar offers similar functionality, but hews much more closely to Safari’s own design aesthetic, with the added benefit of reflecting when you’re holding down keys that will make the clicked link open in a new window or tab. But it lacks some of Ultimate Status Bar’s niceties, like revealing the favicon or file size for the link in
question.

AutoPagerize — Many Web sites break their articles into separate pages, to encourage extra page views (which lead to extra ad impressions). AutoPagerize magically makes that extra clicking (and waiting for pages to load) go away. Subsequent pages of the article you’re reading simply load right into the page, waiting for you to scroll down and read them. The Japanese developer’s Web site is a bit tough to parse, but I needed only to install the extension to start using it successfully.

But Wait, There’s More — While those five extensions are the ones that most regularly impact my daily Web surfing, there are plenty of others. John Siracusa’s standalone Reload Button, an unofficial Instapaper button called Instafari, the Reddit-improving extension Reddit SuperHide, and Panic Software’s Coda Notes all provide handy features and are worth trying out. Apple’s own directory includes new extensions from big partners like Twitter, The New York Times, and Major League Baseball; those are certainly worth a look, too.

In another, not-too-distant life, I was a Web developer. Since Safari Extensions just use familiar bits of Web code – like HTML, CSS, and JavaScript – I realized that I could create some for my own purposes. To date, I’ve built two. The first, Facebook Improved, removes considerable amounts of cruft from that social networking site – invasive ads, unnecessary elements
(that ever-present callout to create an event), and the like. It also changes the site’s font to Helvetica, and makes subtle changes to the placeholder text on certain fields to ensure you never get confused about whether you’re posting on someone else’s Wall or your own.

My other extension, Affiliatizer for Safari, automatically rewrites Amazon links across the Web so that they include the Amazon affiliate code of your choosing. The extension, which affects only links that don’t already include affiliate codes of their own, accepts up to three affiliate codes, and picks one at random on each page view. It’s a nice way to reward yourself, or a friend who has an affiliate code. By default, the app includes my affiliate code and those of our friends John Gruber and Jason Snell, until you save your own preferences instead.

But ounce for ounce, no extensions benefit my day-to-day Web surfing as much as YouTube5, InvisibleHand, NoMoreiTunes, Ultimate Status Bar, and AutoPagerize. Try them out, and you’ll see for yourself how handy these tools are when you’re on Safari. And of course, if you decide you don’t like what a particular extension does for you, just visit the Extension pane in Safari’s Preferences window to uninstall it.