iPod sales have been falling, despite the inclusion of the massively popular iOS-based iPod touch in that category (see “Apple Reports $3.25 Billion Profit for Q3 2010,” 20 July 2010). Some people, like Charles Arthur, writing in The Guardian, have even suggested that the iPod’s declining sales might mean a general slowing of digital music sales.

Nevertheless, given the numbers Steve Jobs reeled off at Apple’s special media event last week, it’s clear that the iPod and digital music sales have been huge for Apple historically, and Apple isn’t about to give them up. Apple has sold 275 million iPods so far (although that may include the iPod touch, which Apple appears to count as both an iPod and as an iOS device). In terms of digital content, the iTunes Store has so far sold 11.7 billion songs, 450 million TV episodes, 100 million movies, and 35 million books. Currently, 160 million people in 23 countries have iTunes accounts associated with credit cards.

So why have iPod sales slowed? The popularity of the iOS devices, of which Apple has now sold 120 million, is undoubtedly related, but there’s also the simple fact that many people already own perfectly functional iPods and see no reason to replace them until they break. Each year’s models are designed to entice people to replace existing iPods, but the fact is, apart from the move from the traditional iPod to iOS devices, there isn’t much reason to upgrade a functional iPod.

That’s not for lack of trying on Apple’s part, and this year is no exception, bringing with it new models of the iPod shuffle, iPod nano, and iPod touch, all of which are available for pre-order now and will be shipping this week. (The 160 GB iPod classic remains available for $249 with no changes.)

iPod shuffle — In redesigning the iPod shuffle, Apple reverted slightly to the design of the second-generation model, which was a squarish clip with buttons. (The third-generation shuffle relied on VoiceOver for controls, eliminating buttons entirely.) The new fourth-generation model is smaller than the second generation, but includes control buttons and the clip to attach it to your clothing. 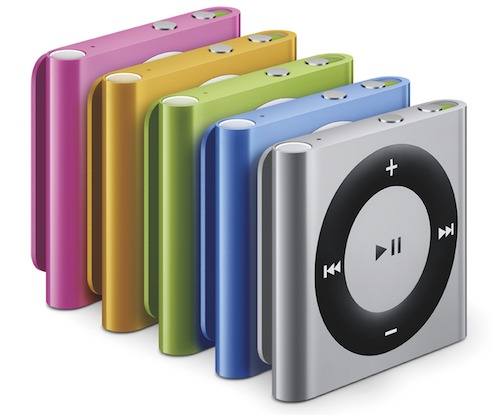 VoiceOver and playlists are still supported, as in the third-generation model, as are the new Genius Mixes. Battery life is rated at 15 hours, and for $49 you’ll get 2 GB of flash storage and a choice of five colors (silver, orange, blue, green, and pink).

iPod nano — Only slightly larger than the iPod shuffle is the new sixth-generation iPod nano, which leaves most of its buttons behind in favor of a multi-touch interface on a 1.54-inch color display running at 240-by-240-pixel resolution. In other words, the new nano looks like a really thick postage stamp, and it’s 46 percent smaller and 42 percent lighter than the previous generation. It does retain a top-mounted sleep/wake button and volume up/down buttons, and the bottom has a dock connector and headphone jack. A clothing clip is integrated into the back of the case. 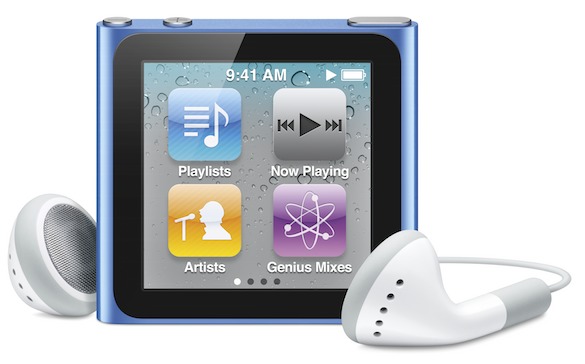 Also shoehorned into that tiny space are an FM radio, pedometer, and Nike+, for tracking of casual exercise. However, the previous generation featured a video camera and voice recorder, and the capability to play video, features Apple has removed from the sixth-generation nano. That’s probably due to the iPod touch gaining video capture capabilities – keep reading.

The new nano also features 24-hour battery life, supports on-the-fly Genius playlists and Genius Mixes, and comes in seven colors – the same silver, orange, blue, green, and pink as the iPod shuffle, plus graphite and a red unit that sends some of its profits to the Product (Red) program. An 8 GB unit will cost $149 and a 16 GB unit will cost $169.

Despite the multi-touch interface, it doesn’t appear that the iPod nano is running iOS, and our sources concur. That said, its basic interface is similar. You can swipe left or right to move among pages of the Home screen, tap to select items, and touch and hold to rearrange icons on the Home screen. Double-tapping zooms photos, and the usual music controls are all handled onscreen as well. Although the nano’s tech specs claim it has an accelerometer (for the Shake to Shuffle feature), you need to do a two-finger rotate gesture to rotate the screen if it’s in the wrong orientation.

iPod touch — Finally, we come to the real meat of the iPod announcements – the fourth-generation iPod touch that has taken over from the iPod nano as the most popular iPod of all time. 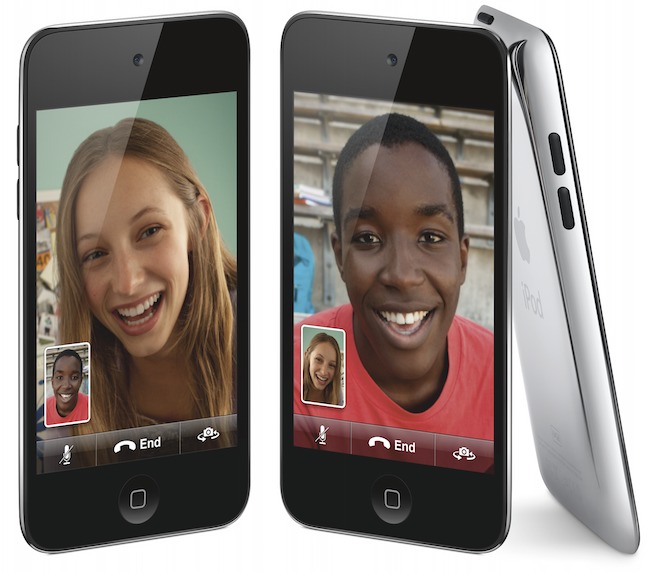 Not surprisingly, it looks a lot like the previous generations, but is even thinner. Equally unsurprising, given the changes in the iPhone 4, are the other new features, anchored by an LED-backlit, 24-bit color Retina display with four times as many pixels, running at 326 pixels per inch. Under the hood, it features an Apple A4 chip and a 3-axis gyro for improved gaming controls.

On the outside, even though it retains the old-style case rather than adopting the glass-and-stainless-steel look of the iPhone 4, the new iPod touch finally catches up with its sibling thanks to a pair of cameras: a rear-facing camera capable of recording 720p HD video at up to 30 frames per second and still photos at 960 by 720 resolution (which is less than what the iPhone 4’s camera can produce for stills), and a front-facing camera that can do VGA-quality photos and video at up to 30 frames per second. Needless to say, the front-facing camera is designed for use with FaceTime, and can communicate with iPhone 4 users. Without the capability to make phone calls, the iPod touch can use an email address for initiating FaceTime
sessions.