Character entry? Isn’t that what we used to call “typing”? Yes, but how can you type characters that aren’t printed on your keyboard, or aren’t available at all through any key combination? There is of course the venerable PopChar X from Ergonis if you need to insert special characters frequently, but what if you need just the occasional copyright symbol, checkmark, cents sign, or does-not-equal symbol?

It turns out that Apple provides some useful character discovery and entry tools, and in this excerpt from “Take Control of Fonts in Snow Leopard,” I’ll share what you need to know about one of them: Keyboard Viewer.

If you’re interested in Mac OS X’s font handling in general, I hope you’ll take a look at the book, which has 225 pages of details on font history and architecture; how fonts work in Mac OS X; how to organize fonts; how to deal with fonts from Adobe Creative Suite, Microsoft Office, and Apple’s iLife and iWork suites; and much more. It’s only $15, and is the definitive book about fonts in Mac OS X.

Turn on the Keyboard and Character Viewers — Mac OS X provides two text-input tools, Keyboard Viewer and Character Viewer, to help handle the problems resulting from three issues: not all characters are printed on your keys (where the heck is ©?); most accented characters need to be generated with a special key sequence; and many fonts have characters that can’t be typed with any key combination.

Turn on the tools in Snow Leopard:

Turn on the tools in Leopard: 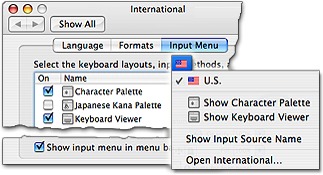 Character Viewer is also available from several other places, in both Leopard and Snow Leopard. In the Finder, TextEdit, and other programs that strictly follow Apple guidelines, Edit > Special Characters opens Character Viewer. This command works whether or not you’ve added the Input menu to the menu bar.

If you have an Input menu for foreign language keyboards but haven’t put Keyboard Viewer and Character Viewer in the menu, the Special Characters command not only opens Character Viewer but also adds both Viewers to the menu.

Keyboard Viewer’s Font Menu — Not all evolution is an improvement, and that of the Keyboard Viewer is a case in point. The original version was useful for more than just finding accented characters; it had a Font menu so you could see where every character lived in each font. With all fonts assumed to be Unicode compliant, however, characters should be in the same place no matter what the font. By the time Leopard showed up, Keyboard Viewer lost its menu bar Font menu.

In Leopard, Keyboard Viewer has a pop-up Font menu (which is more likely short for “font mapping”), with choices limited to Standard, which shows character placement for the currently selected language and a short list of PiFonts – picture fonts – that Mac OS X considers worthy of the label. The screenshot below shows an example of Mac fonts that are so worthy; if you have Microsoft Office 2008, the list includes Bookshelf Symbol 7, Marlett, MS Reference Specialty, and MT Extra. Unfortunately, Keyboard Viewer is of no help if you’re using a picture font not listed – such as, oh, say that seldom-used, little-known Zapf Dingbats.

Snow Leopard’s Keyboard Viewer evolution goes even further: no Font menu at all!

You can check out the entire Option and Option-Shift character sets, and look up characters whose positions you can’t remember, with Keyboard Viewer: open it from the Input menu, and hold down Option or Option-Shift to see the characters those modifiers produce.

Click Keyboard Viewer keys, or just type, to enter a displayed character. The best approach, however, is to learn what key combinations produce the characters you use often, and use mnemonics like those in the table below to help remember them. 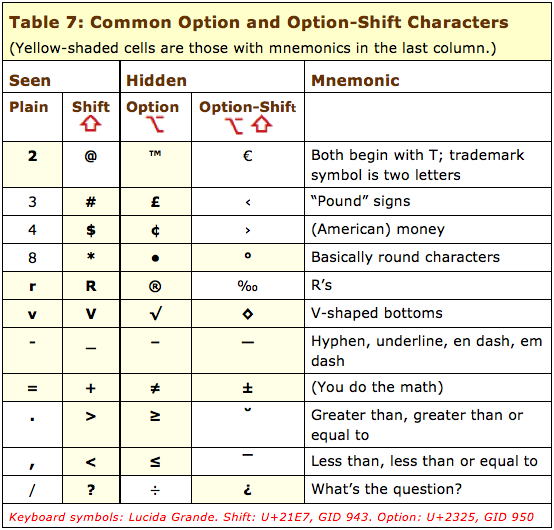 (Note that the key combinations in this table and described elsewhere in this section hold for only the U.S. keyboard. With a different input keyboard or a different Mac OS X system language, even some common characters can be in different places.)

Type Accented Letters — The Mac has always provided an easy way to type a letter with one of five common accent marks (for use in words like déjà vu, naïve, rôle, and El Niño) through the use of dead keys: keys that don’t produce anything until you hit another key. The Mac’s dead keys are Option-key combinations, and typing a subsequent letter produces the accented letter:

To get é, for example, all you have to do is press Option-e for the acute accent and then type e. The final accented letter is a single character generated from what you typed, so a single backspace erases it.

Using dead keys is just a clever way to type characters that are otherwise unavailable from the keyboard. You could enter é in other ways – through Character Viewer, for instance, or with a foreign language keyboard – but why bother when this method is so easy?

When you need one of these accents but can’t remember the key combination, Keyboard Viewer can help. It shows both the accent keys and the accentable letters, as shown in this screenshot.

If you keep Keyboard Viewer open while you’re typing, you have the option of clicking its keys to enter the accents and letters:

To type an accent by itself, type a space after using the accent’s Option-accent key combination.

Sometimes Keyboard Viewer doesn’t update when you choose an input keyboard from the Input menu. If the Keyboard Viewer’s title bar doesn’t reflect your keyboard choice, close and reopen it.

Now you can use Keyboard Viewer to access the larger selection of accents and accentable letters the same way you use it for basic accents with the standard U.S. keyboard: hold down Option to see the accents, type the one you want, and then type the letter; see the screenshot. This example shows the results for Option-C, the cedilla accent.

Not all fonts include all the accented characters you see in Keyboard Viewer. If you type a character that’s not in your current font, it’s entered in your document in a different font – one that actually contains the character.

Why not always use the Extended keyboard? Because it giveth with one key and taketh away with the other. With all those accents given over to the Option key, you’ve lost standard Option characters like the √ from Option-V and π from Option-P.

Apply After-the-Fact Accents — In some applications, and with certain fonts (yes, that’s vague, but with so many variables the best I can give you is a “more often than not”), you can type a letter first and then use an Option-Shift-accent combination to add the accent when you have the U.S. Extended Keyboard active.

So, in TextEdit, for instance, you can choose Helvetica, type o and then press Option-Shift-U, and wind up with an umlaut over the o (this is needed to spell the names of heavy metal bands like Mötley Crüe properly). For a list of the Option-Shift combinations you can use for applying accents this way, see Tom Gewecke’s diacritics page.

More about Character Entry — While Keyboard Viewer is helpful for entering Option- and Option-Shift characters, and accented characters, what if you want to enter a character that can’t be typed from the keyboard at all? That’s where Character Viewer comes in, and the full “Take Control of Fonts in Snow Leopard” has 16 pages showing you how to find and enter such characters via Character Viewer. Along the way, it devotes 12 pages to explaining the glyph approach to font characters, describing how characters that lack Unicode IDs are handled, and showing why you should care about alternative characters. Plus, if you’ve
ever felt limited by the characters in Zapf Dingbats and Webdings, you’ll have fun exploring all the dingbats available in other fonts, including the dingbat-rich Hiragino Kaku Gothic Pro.

Comments About Use Keyboard Viewer to Type Special Characters