The problem with preemptive multitasking, and one that Mac OS X definitely ran into in its early days, especially on the less-powerful Macs of the time, is that if the operating system gives too much processing time to background applications, the frontmost application feels sluggish, which irritates the user. And, as much as operating system programmers sometimes seem to forget this, it’s all about the user.

Although Mac OS X’s preemption policies have become more sophisticated over the years, it’s still possible for a background application to use non-trivial amounts of CPU time while doing essentially nothing useful. I’m not talking about Time Machine backing up your hard disk in the background; I mean things like Safari continuing to run Flash animations while you’re using another application. And if you have a bunch of tabs open in Safari, each executing its own JavaScript or Flash code even though you’re not using the program, your Mac can bog down. Worse, if you’re using a MacBook or MacBook Pro, as your CPU usage goes up, so does the heat output, causing the fans to come on. So now your Mac is not only slow, it’s loud! Even worse,
your battery life will drop precipitously as well.

So AppTamer can’t simply tell all background applications to stop processing, it has to work on a more granular level. You can therefore select which applications AppTamer should stop when they’re in the background, but you don’t have to do all the work. As a result, AppTamer’s interface is largely informational – it tells you which applications are stopped, graphs how much CPU you’re using, displays an Activity Monitor-like list of active processes, and provides details about a selected process. 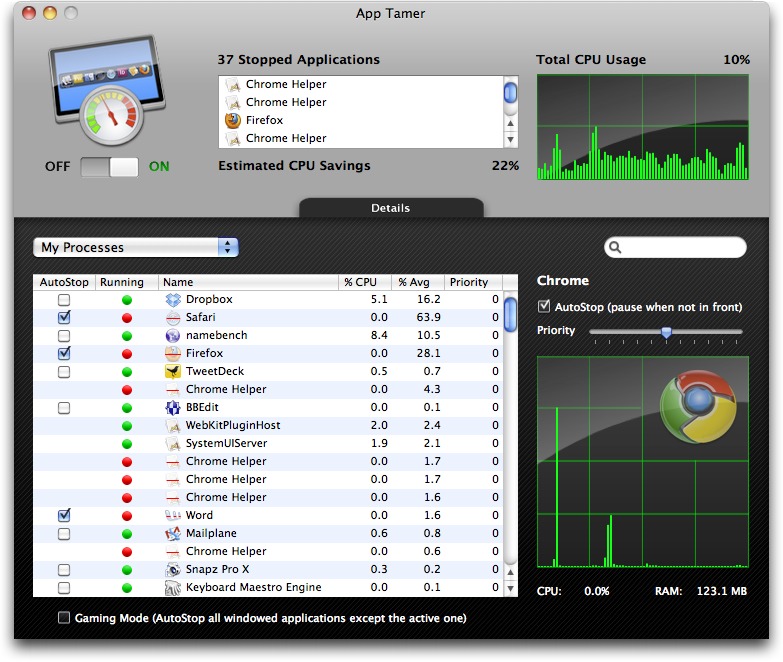 Jon Gotow told me that AppTamer maintains a number of lists, including a blacklist of system processes that shouldn’t be stopped (they don’t even get a checkbox in AppTamer’s interface), a list of programs like iChat and iTunes that get a custom warning if you try to have AppTamer stop them, and a list of helper apps that can and should be stopped and started with their parent applications, such as the Chrome Helper process that Google Chrome spawns for each open browser tab. Also, AppTamer warns you if you try to have it manage
background-only applications, since they likely need to keep executing at all times.

How do you set up AppTamer? The easiest thing to do is simply to launch the program and continue about your normal usage for a while, checking CPU savings in either the AppTamer window or its system-wide menu in the menu bar (which lists running and stopped applications and background
processes). AppTamer’s default settings will likely save you some CPU time on their own. To see if you can save even more CPU time, click the Details tab in AppTamer to show the list of processes, choose My Windowed Processes, and then scan down the list of what’s running. If you see an application that you know doesn’t need to execute in the background, select its AutoStop checkbox. Continue working, and see if AppTamer’s efforts make a noticeable difference in the responsiveness of your Mac. (Technically, you can have AppTamer stop non-windowed processes and those owned by other users, but it’s likely that those need to be executing in the background.)

It’s a little tricky to figure out which applications don’t need to execute in the background. For instance, AppTamer knows that iChat does require background cycles, but doesn’t know that Skype does as well. And while it’s obvious that iTunes needs to keep playing music even when it’s not in the foreground, it might be less obvious that Twitter applications need to update themselves in the background on a regular basis. Plus, there’s no need to stop applications that are already well-behaved in the background, like BBEdit. As a result, another trick I use to determine what’s worth stopping is to sort AppTamer’s process list by the %Avg column, which shows the average CPU use over 15 seconds. Processes at the top of that list, like
Firefox and Safari, are prime candidates for stopping.

AppTamer also has a Gaming Mode checkbox that, when selected, stops all windowed applications except the active one to ensure that the frontmost application gets as much CPU time as possible. This is relevant only for people playing games, where the game needs lots of processor power and you aren’t interested in anything else happening while you’re playing.

There is one confusion in AppTamer with regard to CPU usage numbers. AppTamer reports CPU usage for an individual app normalized to a single processor because that’s the way Apple’s Activity Monitor does it. That’s why you can have an app using 107 percent of CPU on a dual-core Mac – it’s really using some portion of each core such that the portions add up to 107 percent out of 200 percent.

But where it gets weird is that AppTamer calculates the estimated CPU savings by adding up the last average CPU usage value for each stopped application and dividing it across all processors. So if Safari is shown to be using 10 percent of the CPU on a dual-core Mac on its own, your overall savings is reported as only 5 percent, which may make AppTamer look like it’s less useful. Jon Gotow said he’s continuing to think about better ways to present this data.

Regardless of what the numbers say, I’ve found that it’s obvious that having numerous tabs open in Firefox, Safari, or Chrome in the background can result in slower foreground responsiveness in other applications. On my 13-inch unibody aluminum MacBook, AppTamer definitely reduces CPU usage and translates that into cooler and quieter operation (and although I’ve been working on wall power, I presume battery life would also be improved). On my 8-core Mac Pro, AppTamer’s overall performance improvement is less noticeable, since the machine has so much more processing power.

There are two slightly disconcerting side effects of using AppTamer. Since stopped apps appear to Mac OS X to be crashed, you’ll generally see the spinning pizza of death when you move the mouse pointer over their windows in some cases. Similarly, Activity Monitor reports stopped applications as “Not Responding.” Both of those indicate the application is stopped, not that it is crashed, and as soon as you click a stopped application’s window or Dock icon, it wakes up instantly. Of course, truly crashed applications will look the same as stopped applications until you realize they aren’t responding to clicks, which might be briefly confusing.

In the end, only you can determine if AppTamer will help save CPU cycles given your particular applications and usage patterns. I could, for instance, stop keeping lots of tabs open in Firefox to reduce its processor usage, but since I seem incapable of doing that, AppTamer is helpful to me. You can try AppTamer for 15 days for free, and if you find that it’s helpful during that time, it costs $14.95 for a single-user license.