Apple has quietly released iTunes 10.0.1, a minor update that fixes a few bugs and better integrates the Ping music social networking service. On the bug front, iTunes 10.0.1 fixes video picture quality problems that could crop up depending on whether on-screen controls were visible, fixes a crash that could occur when interacting with album artwork in a separate window, improves performance of some third-party visualizers, solves a bug that could cause the iTunes library and playlists to appear empty, and resolves an incompatibility with some third-party shared libraries.

More interesting are the changes surrounding Ping. Most notably, Ping replaces the Genius sidebar that you could display by choosing View > Show Genius Sidebar or clicking a little button at the bottom right corner of the iTunes window. The Genius sidebar showed general recommendations for you if nothing was selected, and if you selected a track, the sidebar recommended related songs and albums. Now, if nothing is selected, the new Ping sidebar shows activity from your Ping friends. If you select a track, buttons in the Ping sidebar let you “like” the current track and post a comment about it. Underneath those buttons, you can follow the artist, if the artist of the selected track has a Ping profile, and see Ping comments related to the
artist. And under that, your friends’ activity appears. 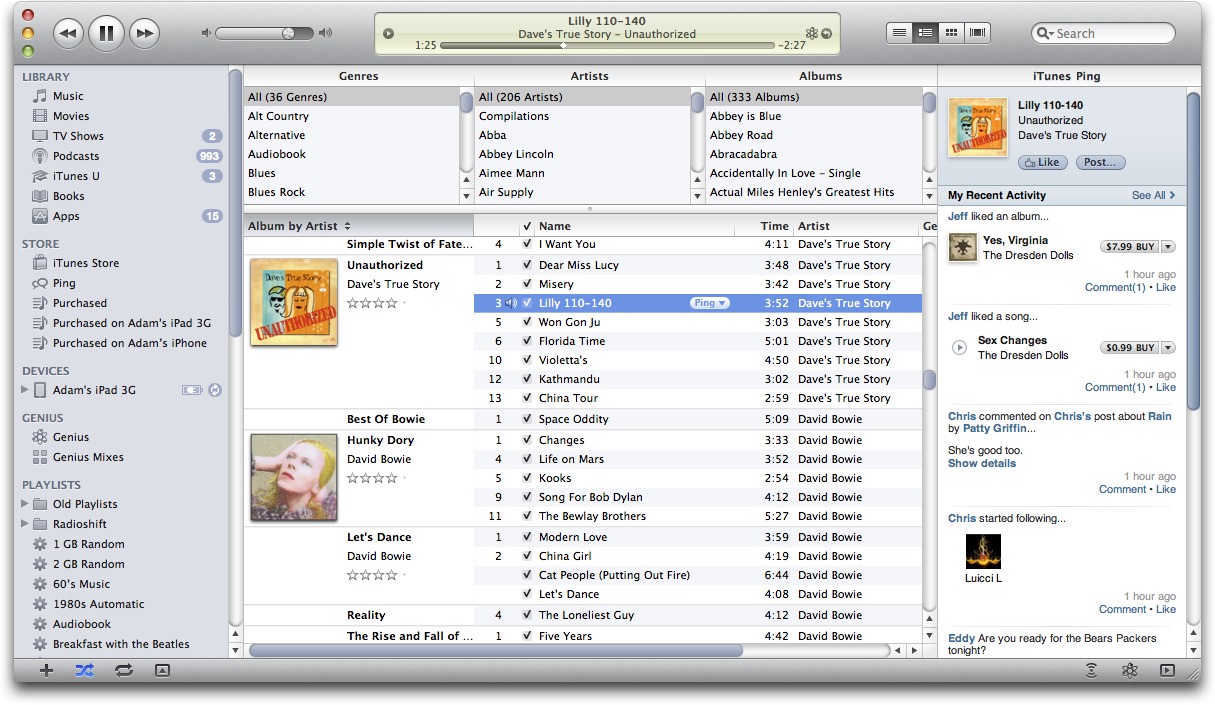 Where the Ping-related changes are a big win is that they make it possible to “like” tracks and post comments about them from within iTunes itself, while the track is playing, either from the button in the Ping sidebar, or from a menu that appears when you click a new Ping button that appears next to the name of the selected or playing track. Before this, Ping required users to go into the iTunes Store to comment on a track, which was utterly ridiculous. I might think to make a comment on a track while it’s playing, but the more hoops I have to jump through to comment on it, the less likely I am to do so. Now it’s just a matter of typing into a normal Mac window. 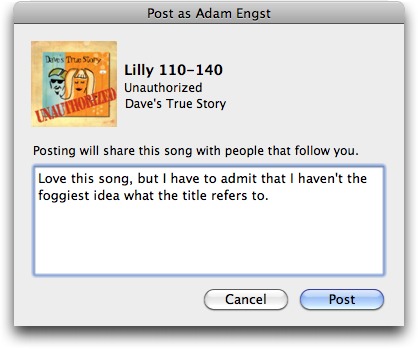 You can also Control-click any track and choose Like, Post, or Show Artist Profile from the contextual menu that appears, so you can use Ping even if you don’t like the Ping button in the list. This is also the trick that’s necessary to “like” or comment on an album; if you’re in Grid view,
Control-clicking an album icon operates on the album as a whole. In List, Album List, and Cover View modes, Control-clicking works only on the selected track.

The other problem with the Ping buttons is that they replace the store link arrows that appeared next to a track, artist, or album. Although Ping replaces that functionality, what’s missing is the capability to Option-click the button to view just that category of item in your library – for example, quickly showing only an entire album or all songs by a single artist. To restore these via the Terminal, execute the following.

If you’re not comfortable using Terminal, you can instead use the Toggle Ping Buttons AppleScript by Doug Adams. Turning off the Ping buttons with this script also re-enables the link buttons.

I must confess that while I haven’t turned Ping off, I can’t see any real reason to use it. It just doesn’t seem very friendly to “share” my favorite music via 30-second previews that require my friends to ante up just to hear the full track. And when it comes to learning about new music, it seems that there’s no necessary overlap between my online friends and our musical tastes. But perhaps the changes in iTunes 10.0.1 will make Ping sufficiently more used that interesting patterns will start to emerge from all the data Apple is collecting from us.