Keeping with its traditional schedule, Smith Micro has released StuffIt Deluxe 2011, the latest version of the longstanding compression and archiving suite of programs. Not surprisingly, the core functionality of the product remains unchanged, so it continues to be able to create archives in a variety of different formats and expand many more.

That’s actually not quite right, since people don’t really think, “I want to compress this file and then send it via email.” Instead, we think, “I’d like to send this stuff to a colleague via email.” The whole compression step is something that’s a good idea with large files, and is necessary if you’re sending a bunch of files, but let’s face it, it’s a detail no one really needs to think about these days.

So StuffIt Destinations provides a floating set of customizable tiles, each of which corresponds with a particular destination for the files dropped on it. For each tile, you specify destination, packaging, and notification options. There’s also an Expander tile for expanding anything dropped on it, and you can create multiple Expander tiles with different settings.

Destinations can include a local file, a CD/DVD, Smith Micro’s SendStuffNow service (see “Smith Micro Enters File Sharing World with SendStuffNow,” 4 August 2010), MobileMe, FTP, a disk image, and email (which is currently hard-coded to Apple Mail; Matthew Covington of Smith Micro tells me the next minor update will work with whatever the default mail client is). Some of the destinations, such as MobileMe, FTP, and SendStuffNow, require
additional configuration information, such as login details and destination directory.

On the packaging side, each tile can archive files in StuffIt X or Zip format (either plain or encrypted), tar with bzip2, or a disk image. And you can be notified of task completion via either Growl or email.

There’s one other tweaky option for each destination tile – Control-click it and you can set up a compression filter that enables StuffIt Destinations to pick and choose among the files dropped on it. So, for instance, you could set up a compression filter to ignore .txt filename extensions, and if you then dropped a folder containing JPEG and text files on the associated destination tile, StuffIt Destinations would create an archive containing only the JPEGs. 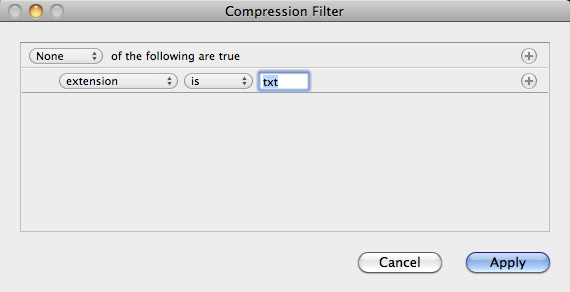 For people who distribute a lot of files to myriad locations, StuffIt Destinations could be an extremely welcome workflow aid. If you don’t have the screen real estate to keep it running at all times, you can create a droplet that performs the same task as a particular tile; as with the compression filter, Control-click the tile and choose Create Droplet. (Droplets created with previous versions of StuffIt aren’t compatible with StuffIt Destinations and will need to be recreated.)

Other New Features — Although StuffIt Destinations is the marquee new feature in StuffIt Deluxe 2011, there are other changes worth noting.

However, there are some gotchas. Smith Micro ran into an OS-level problem that prevents some components from working properly in Leopard, including the StuffIt Contextual Menu, the StuffIt Spotlight plug-in, and the StuffIt Quick Look plug-in. They’re working with Apple to resolve the problem and will release an update when possible. Until then, if you need these features in Leopard, you can contact Smith Micro tech support for a new build that should work.

The Lineup — As always, there are three levels of the StuffIt family. StuffIt Deluxe includes everything for $49.99, and upgrades from previous versions cost $29.99. In comparison, the $29.99 StuffIt (which was previously called StuffIt Standard Edition and which costs $14.99 to upgrade) has all the basic features, including StuffIt Destinations, but lacks the capability to browse archives, add and remove files from existing archives, rename or extract single files from within an archive, work with online services, and optimize compression of MP3 and PDF files. It
also lacks the iPhoto and Aperture export plug-ins, and Automator actions. Finally, StuffIt Expander remains free for anyone who just wants to expand StuffIt archives, encrypted Zip archives, and many other formats.

In my testing, StuffIt Destinations has worked as promised, and the core of StuffIt Deluxe continues to work fine as well. So is it worth the upgrade? For someone who deals with only the occasional archive, almost certainly not, but such people likely aren’t buying StuffIt to begin with. Those who live and die by StuffIt are using it multiple times a day, every day, and for them, if StuffIt Destinations can save a few minutes of creating and uploading archives, it’s likely worth the upgrade fee.