Orbicule has released a free extension for Safari 5 that blocks several methods of tracking your behavior across multiple Web sites. The Incognito extension can prevent Google’s AdSense and Analytics JavaScript from phoning back to the mothership. This incidentally blocks Google ads from appearing, but that’s not the primary intent. The extension can also suppress all calls back to Google, and prevent Facebook and YouTube from working on sites other than their own. 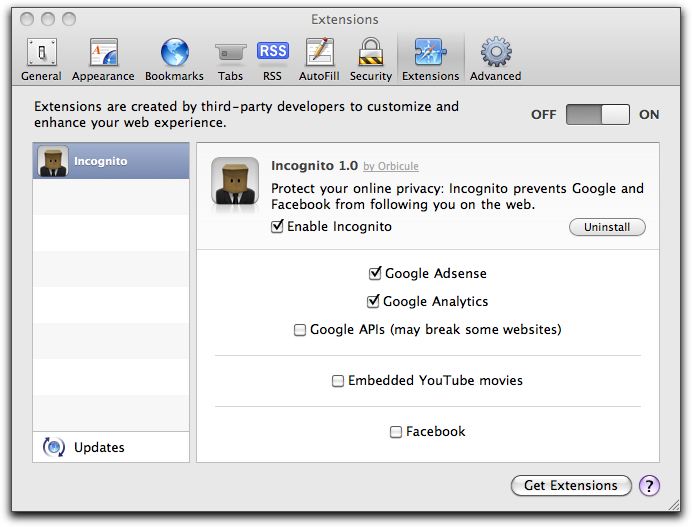 (Orbicule is the maker of Undercover, a fine theft-recovery program that we’ve written about many times, as in “Undercover Theft-Recovery Software Update Gives You the Details,” 19 April 2010.)

The Incognito extension is the latest entrant in a class of tools designed to fight back against multi-site tracking. Advertisers have used cookies, JavaScript, and other methods of associating your behavior on many sites with the same identity, which can then be used to target ads and offers at you. That same information can be sold to other parties and then associated with “real-world” data, such as your mortgage, credit record, and other information.

Ad blockers, scrubbers, anonymizers, and the like can block both directions of information flow. People who don’t want to see ads, Flash content, or what-have-you can prevent their Web browsers from displaying such. And if you don’t want any of the elements that appear on pages you view to trigger tracking and associative data mining, you can do that, too.

Incognito attacks just a portion of this ball of wax. By blocking Google AdSense, it prevents ads from appearing on Web sites, and it stops Google from collecting information about your browsing behavior. (TidBITS displays Google AdSense ads.) Analytics is a trickier issue. The free metrics service lets sites like TidBITS learn how a site is being used and traversed. We use it to see what articles are read most, among other purposes. But Google also receives some aggregate information from our use of Analytics, and uses that data for its own research. Google offers an opt-out option for AdSense and a browser plug-in to opt out of Analytics – but it’s not compatible with Safari.
Incognito also optionally lets you turn off all Google APIs, which use JavaScript to communicate to the firm. The extension notes that this “may break some websites,” as Google’s application interfaces are used for a host of reasons beyond tracking.

For Facebook, the problem is a bit different. Facebook allows unaffiliated sites to link into visitors’ social networking profiles if a visitor logged in to Facebook in the recent past on the same browser. This mostly results in a Like button appearing on media, blog, and other sites.

As a result, Facebook obtains information about your browsing habits purely by you visiting a site that has a Like button. Clicking the Like button sends Facebook even more data that’s stored with your Facebook profile. Since Facebook doesn’t allow you to disable third-party Like buttons from appearing, Orbicule has stepped up to the plate to provide that feature with Incognito. (You can also use your Facebook credentials to log in to many Web sites, which also gives Facebook information about your browsing habits; Incognito doesn’t address this.)

Finally, Incognito can disable YouTube videos from appearing as embedded movies on a third-party Web page. These embedded videos send tracking information to Google’s YouTube division even if you don’t watch the video. YouTube has its own opt-out page for advertising and some tracking. You can also use a Flash blocker to allow YouTube selectively on specific sites. (TidBITS embeds YouTube videos in articles as well, purely so readers don’t have to click over to the YouTube Web site, which is designed to distract you into watching more videos.)

The use of extensions in Safari 5 isn’t turned on by default. Select Safari > Preferences and click Extensions to flip the switch to On. Then you can download the Incognito extension from Orbicule’s site, install it, and configure it.

I continue to have mixed feelings about ad blocking and Web tracking, and the kind of intrusions into privacy that large Web sites now routinely and legally engage in (within the United States, at least). An individual can absolutely choose what he or she sees; we’re not Alex in “A Clockwork Orange” with our eyes forced open. And our every online step should not be recorded for posterity; regardless of the initial intent, that sort of data has a tendency to be used in ways that don’t benefit the people being tracked.

On the other hand, most of my living is derived from writing for publications that rely on ad revenue and make essential business decisions based on Web analytics. While I block Flash by default in my browsers (for purely functional reasons), I do not block ads – and occasionally find and click on something of interest. And I don’t mind a publication knowing I’ve visited and read a particular article, since in some ways that counts as a vote in favor of the publication, of that particular article, and even of the Web browser I’m using. I have no problem casting those votes.

Even more to the point, it’s only the truly large sites and advertisers who are pushing hard on our privacy. Smaller publications (like TidBITS) have neither the volume of visitors nor the technical resources to extract privacy-busting information from Web logs, even if they wanted to. Similarly, small advertisers are generally targeting their ads manually by supporting specific publications, rather than attempting to gain tiny advantages by tracking behavior across multiple sites.

For most people, the crux of the matter with the Incognito extension and the online privacy debate isn’t whether online advertising is acceptable. Rather, it’s the lack of trust we now have in how our personal data and habits are being recorded and used by massive companies that appear to lack sufficient motivation, internal controls, and external regulation to acknowledge that privacy is a human right.

Comments About Safari Extension Hides You from Google and Facebook