Perfect timing: I had just seen the first low power warning from my Magic Mouse overlay my iMac’s screen when my phone rang—it was Dennis, my older brother, asking me what I wanted for my birthday. “How about an Apple Battery Charger?” I immediately asked, thinking about that battery warning and remembering that the dish where I toss depleted batteries before taking them to a recycle drop (as if!) was getting full. Just two days later, right before the alkalines in my mouse flatlined, I found a small package at my front door. The charger that came out of the small package was even smaller. 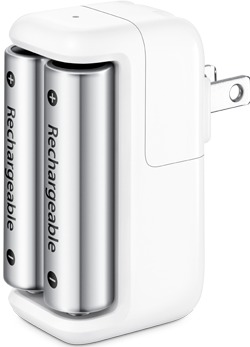 But is it worth it? That depends on your expectations.

It’s certainly easy to use: just stick in one or two of the six supplied AA NiMH batteries and plug the charger in. A pinhole-size light at the plug end of the charger glows amber when it’s charging, green when it’s done charging, and turns off after six hours.

And it’s convenient: When it’s not charging batteries, the charger draws only a measly 30 mW, which means you won’t drive up your electric bill even if you leave it plugged in all the time. A set of batteries recharges fully after five hours.

But what I really wanted to know (and what I’m sure you want to know) is, how long do the batteries last?

First, let’s look at what happened when I stuck my first set of newly charged Apple NiMHs into my Magic Mouse: my iMac reported that my mouse batteries were at 91 percent of capacity. To double-check, I swapped in a different set of fully charged NiMHs, and the iMac registered an even lower 86-percent power level. Not a promising sign.

Now, remember my dish of dead batteries? Slothful as I am, I haven’t taken any batteries to be recycled since I got my Magic Mouse, so I have a baseline for comparison. I got the mouse in mid-November 2009, and the dish held eight dead soldiers before I got the Apple charger at the beginning of this month. Add in the dying batteries I had just removed, and there are now ten dead batteries in the dish, which means that my Magic Mouse had been getting better than two months of service from each set of the alkalines I’ve been using.

By comparison, after only two days of (admittedly heavy) mousing around, the Apple NiMHs that started at 86 percent had dropped down to 62 percent of a full charge. Seeing this, I didn’t think I was going to get two months out of a set of charged NiMHs. More like a week or two per set if the power depletion rate I’d seen so far remained constant.

But it turns out that the depletion rate isn’t constant. The NiMHs don’t run down the same way that disposable batteries run down: once my current set of Apple batteries hit about 60-percent capacity, the rate of decline slowed drastically. Although it took only two days for my batteries to go from 86 percent to 62 percent, it took four more days to go from 62 percent to 56 percent, and a full week after that to go from 56 percent to 54 percent.

The reason for the initial weak showing of the NiMHs, of course, is quite simple. The typical fully charged alkaline AA battery delivers 1.5 volts and has a 2500 mAh capacity. By comparison, the low self-discharge (LSD) NiMHs that Apple supplies with the charger deliver 1.2 volts when fully charged and each have a 1900 mAh capacity. With that difference, I am surprised to see that a fully charged set even registers 86 percent of capacity on my iMac. (Note that the Apple charger can also work with other LSD NiMH AA batteries, some brands of which may have different capacities than the batteries supplied by Apple.)

The depletion curve of the NiMHs is also as precipitous at the end of a duty cycle as it is at the beginning: after about three weeks of the slow decline following the initial quick fall-off, the batteries began a race to the bottom. Only a few hours after I saw the 20-percent capacity warning appear on my iMac, the batteries were no longer able to keep my mouse in contact with my iMac. All told, the NiMH batteries in my Magic Mouse had lasted about three and a half weeks on a charge.

Even though my Apple batteries don’t last as long per charge as disposable batteries, I am far from disappointed. The LSD NiMHs that Apple supplies are designed to hold a charge when not in use, and lose only 20 percent of their charge after a year in storage. That means I can charge up a set of my Apple batteries in five hours, stick them in a drawer, and, whenever my Magic Mouse begins warning me, I can just swap the charged batteries in and recharge the depleted ones in an afternoon; after that, they can go in the drawer until needed. And though they turn out to run down significantly more quickly than disposable batteries, I’d still rather do a more frequent swap-and-charge exercise than buy a six-pack of disposable batteries
every few months, and then have to look for a place to recycle the dead batteries (especially given my sorry record in this regard), or, worse, surreptitiously toss them in the trash in the dead of night.

But will you be disappointed? Beats me. If you need the high initial charge and the other performance characteristics of disposable batteries, you might be. Otherwise, Apple’s Battery Charger with its supplied batteries seems like a reasonable investment.

Comments About Apple Battery Charger and the Secret of NiMH