The question everyone asked when they first saw FaceTime for the iPhone 4 was, “When will this be available in iChat on the Mac?” The answer came at last week’s media event: never (or at least not now). Instead, Apple CEO Steve Jobs demonstrated a separate FaceTime program for Mac OS X that works with the iPhone 4 and fourth-generation iPod touch. Steve Jobs said 19 million iOS devices with which you can use FaceTime have already been sold. A beta release for Mac is already available for testing, and no restart is required after installation. You need Mac OS X 10.6.4 and—obviously—a camera-equipped Mac.

After installing FaceTime and launching it, you’re prompted to log in with an Apple ID, which is the same ID used to purchase items from the Apple Store and iTunes Store. If you don’t have such an account, you can create an identity entirely within the program. With an account, enter your credentials and click Sign In. (At initial release, the beta had a glaring security hole, as reported by Macnotes. Once logged in, anyone who wandered by your computer could access your Apple ID account settings, such as birth date and secret question/answer pair. Apple fixed the problem on the server side several days later.)

To let you be discoverable to others, FaceTime for Mac asks you to choose what email address you associated with your FaceTime access. In iOS, this appears to be implicit, as there’s no way to choose how your iPhone or iPod touch is associated. You can add additional email addresses later through FaceTime > Preferences > Add Another Email.

FaceTime calls can be accepted when the app isn’t running, but you can disable that in preferences, too. Set the FaceTime On/Off switch to Off. You can accept or reject individual calls, of course.

After accepting or entering an address, click Next, and your contact list appears. Three buttons at the bottom right of the screen let you choose among Favorites set in the program, Recents for recent connections, and Contacts, which is selected by default.

Your face appears in a large preview window shaped with the same proportions as an iPhone or iPod touch in portrait orientation if you have a built-in iSight or (as I do) an external FireWire iSight camera. (I apologize for not shaving in the screenshot.) Select a contact, and then click either an email address or a mobile phone number that you believe to be associated with an iPhone 4, and the program tries to make a connection. (You can have only one-to-one conversations, unlike iChat, which allows multiple-person audio and video chats.) 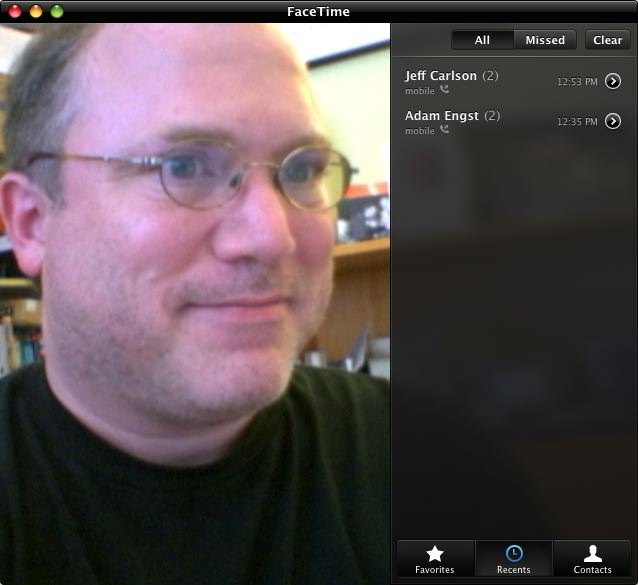 After connecting to the other party, FaceTime for Mac shrinks the view of you down into a corner of the screen, as in the iOS version. With iOS, you can rotate your device to change the orientation of the video you’re sending. On the Mac, you hover over your image, and click the rotate button. This reframes the image from the iSight into a landscape format. If the other party does the same on the Mac or rotates the iOS device, the full FaceTime window changes to landscape, too. FaceTime in iOS shows whatever
orientation you’ve chosen on the other end. 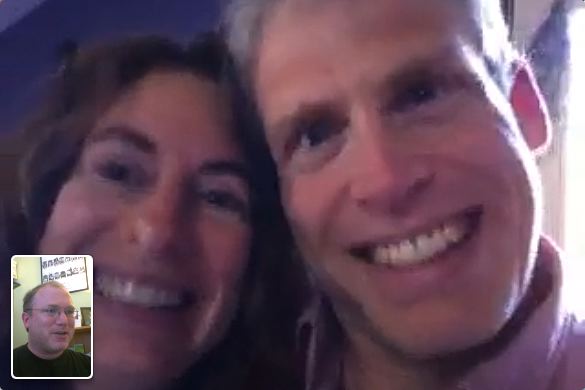 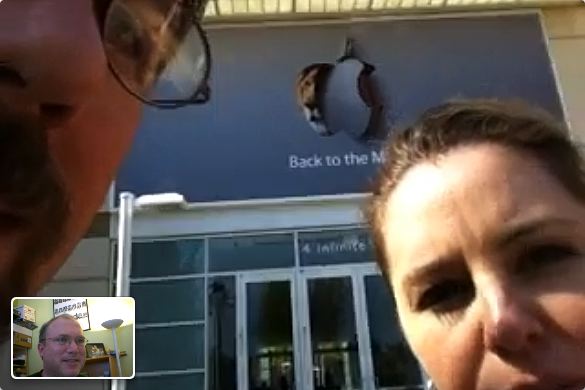 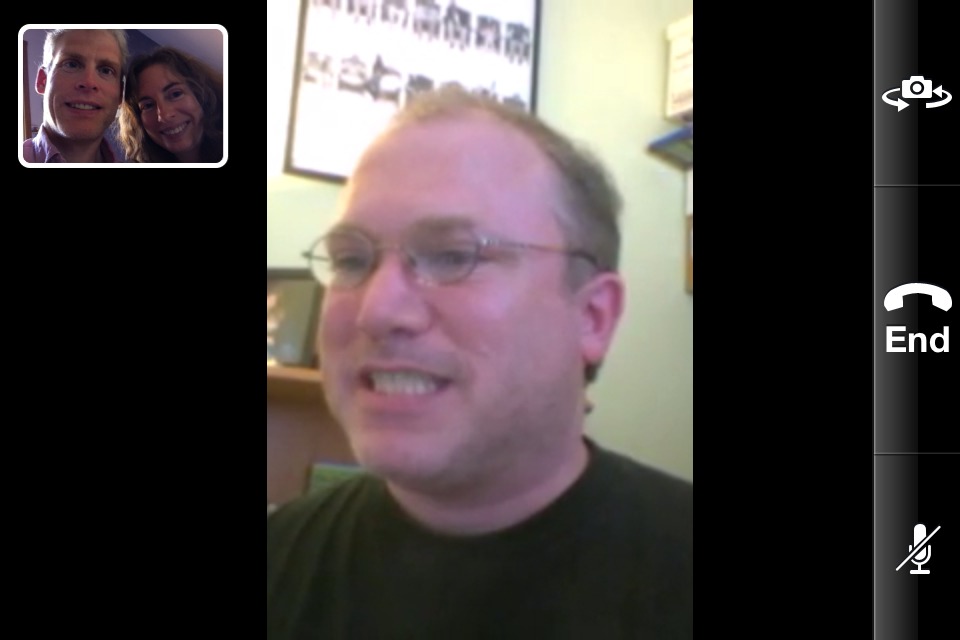 iOS device users can swap the front and back cameras to show off, for instance, their
marvelous front yards. FaceTime for Mac allows only audio muting; iOS users can press the Home button or double-press it to switch into another app, and the video is paused while audio continues to work. 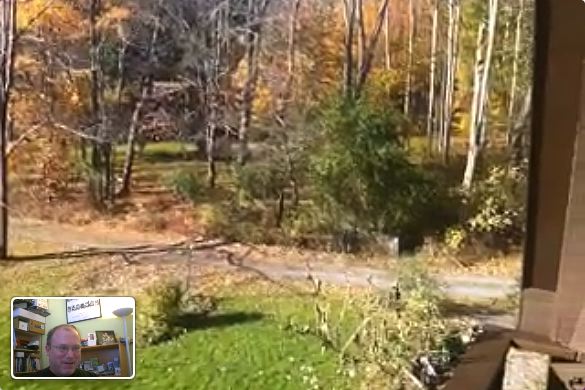 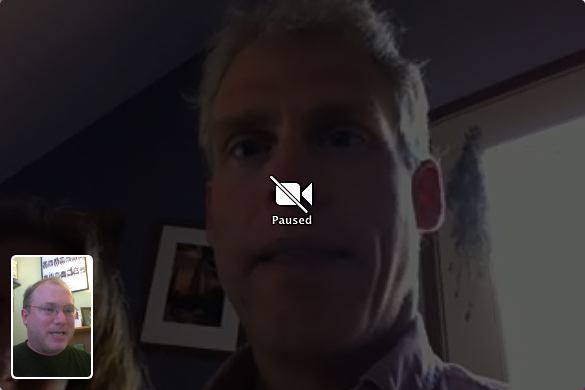 Since this is a beta, I wasn’t surprised to see a couple of glitches. I was unable to get full-screen mode to work. And in talking with Adam Engst, his video transmission wound up locked in an orientation 90 degrees off how he was holding his phone. 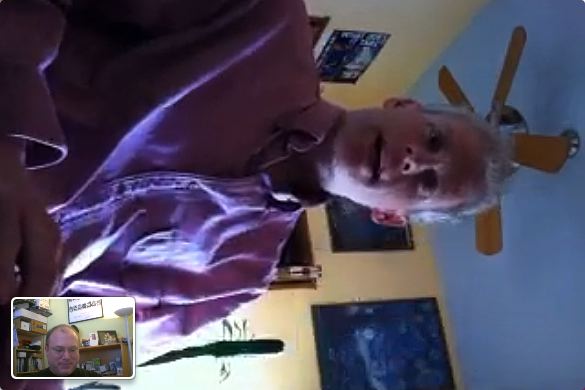 Will FaceTime replace iChat? Certainly not in this first iteration. iChat allows multiple parties to chat, maintains its own buddies list, allows access to you only when you’re logged in, and includes text chat and screen sharing, among other features. On the other hand, FaceTime requires no configuration after you log in with your Apple ID, relies on your existing contacts, and uses phone numbers and email to make connections. That’s appealing to users who don’t want buddies and account status and other
nonsense required in instant messaging networks.

But I can see Apple trying to divest itself of iChat over time by adding more features to FaceTime for Mac. Apple is dependent on AOL Instant Messenger (AIM) for the underlying buddy and connection components of iChat with MobileMe. iChat also works with Google Talk and Jabber servers, including Mac OS X Server’s version of Jabber. But that’s all a bit out of Apple’s control, and we all know how much Apple hates being reliant on other companies.

Part of the case for that transition is that the MacBook Air comes with a “FaceTime camera”; the iSight name only appears on older models. Over time, I can’t see Apple supporting iChat and FaceTime as separate and unequal models of communication. By the time Mac OS X Lion roars, FaceTime and iChat might be chimerically molded together.

Comments About At Apple Event, Mac OS X Gets FaceTime