Apple’s smallest laptop model, the MacBook Air, has long been due for an update, and as the “one more thing” part of last week’s media event, the new models didn’t disappoint. That’s right, “models,” plural, since the MacBook Air now comes in two sizes: one with the traditional 13.3-inch screen, and an even smaller and lighter unit with an 11.6-inch screen. (Jeff Carlson was on site for Apple’s event—he edited this article via in-flight Wi-Fi on a new 11-inch MacBook Air while he flew back from California—and he’ll have more hands-on details soon.) 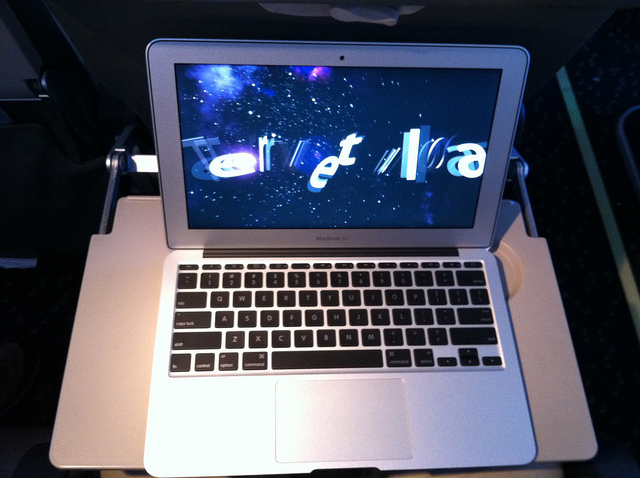 All four models offer only solid-state storage for persistent memory—there’s no hard drive, nor even space for one! The 11-inch model comes in 64 GB and 128 GB varieties, while the 13-inch Air is available in 128 GB and 256 GB versions. This flash memory isn’t packaged as a swap-in hard drive replacement, like most solid-state drives (SSDs), where the shape and package looks like a standard laptop drive. Rather, the memory is arrayed on cards that are permanently installed. You can’t upgrade it—although you never know if a third party will figure out a solution later. (The folks at iFixit disassembled a MacBook Air and found that there
is an SSD controller inside, however, which makes a computer think that the memory it’s talking to is a hard drive.)

In both sizes, 2 GB of RAM is standard, but you can bump that to 4 GB for $100 at the time you order; note that you cannot install RAM after purchase. Other standard features include the FaceTime video camera, two USB 2.0 ports (which are flush with the edges, no small flip-down door as found in the previous generations), a Mini DisplayPort, headphone jack, built-in microphone, stereo speakers, and a MagSafe adapter. Both also have Nvidia GeForce 320M graphics adapters with 256 MB of DDR3 SDRAM shared with main memory. On the networking side, both sport 802.11n AirPort Extreme wireless networking and Bluetooth 2.1 + EDR; the Apple USB Ethernet adapter is sold separately. The 13-inch model also has room for an SD card slot. In a
particularly nice feature, Apple now ships a USB Software Reinstall Drive to help if and when you need to reinstall Mac OS X. That’s handier, more compact, and more durable than a DVD—and no second computer is required for the reinstallation.

Comments About MacBook Air Loses Hard Drive and Debuts at $999