On 14 October 2010, Apple took the beta label off of its new CalDAV-based MobileMe calendar and made it available as an optional upgrade to all MobileMe users. The new calendar boasts a number of new features and conveniences, but, as many users are discovering, the upgrade process is not transparent, and, in some cases, can be downright opaque. Luckily, switching to the new MobileMe calendar is entirely optional, and if you don’t want to do it, just don’t click that Get Started button in the MobileMe Calendar Web interface, or the Upgrade Now link that appears in the sidebar. 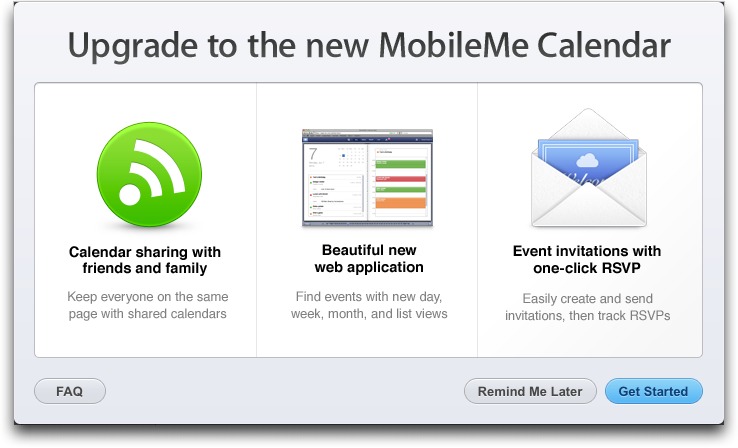 First, the Features — The new Web-based MobileMe calendar app looks a lot like the layout of the Calendar app on the iPad with an added (but easily hidden) iCal-style sidebar tacked on to its left side. The calendar can present day, week, month, and list views, and can be navigated by a control-strip widget at the bottom—again much like the iPad calendar app. 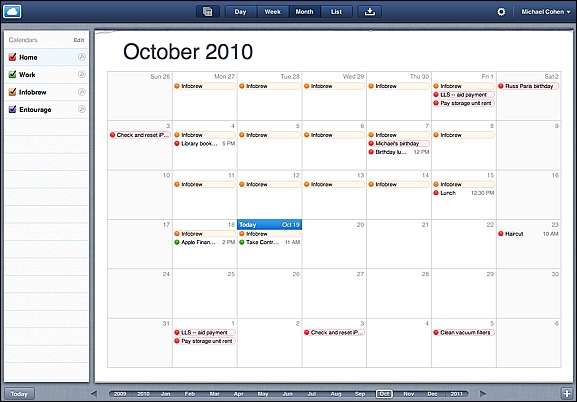 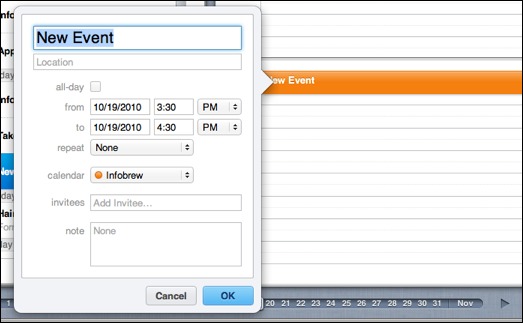 You can invite people to events you create: MobileMe sends an HTML-formatted email message with Accept, Decline, and Maybe buttons. When a recipient responds to an invitation, MobileMe shows you a notification with the recipient’s response.

In the sidebar, you can choose which of your calendars to display in the main viewing pane. You can also click a broadcast button beside each calendar to share it, either privately or publicly. Public calendars can be viewed by anybody: the Web app provides a (long and complicated) URL that anyone with a CalDAV-compatible program can use to subscribe to the shared calendar. When you share a calendar publicly, MobileMe offers to send the calendar URL to a list of email addresses that you provide. Publicly shared calendars are view-only. 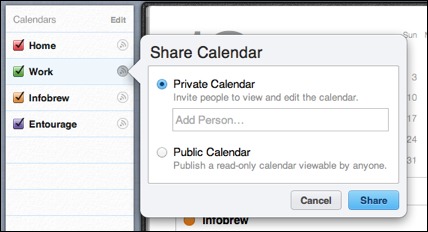 Privately shared calendars can be either view-only or editable by the people with whom you share them. Unlike public calendars, private calendars can be viewed and edited only by other MobileMe members. When you share a calendar either privately or publicly, MobileMe uses your MobileMe contacts to help you address the calendar invitations.

The MobileMe calendar can cache information locally on your computer to improve performance. If you have a complex set of calendars and events, this feature can make using the MobileMe calendar far more fluid, but note that this feature is also a security issue: the local calendar cache is not encrypted, so you should avoid the caching feature on any computer that is not your own.

You can also delete calendars from the MobileMe calendar sidebar, but be warned: deleting a calendar on MobileMe also deletes it in iCal and on every device that you sync with MobileMe.

Then, the Issues — Because the new MobileMe calendar service uses the CalDAV standard for shared calendars rather than Mac OS X’s Sync Services, switching to the new format can raise a number of issues:

All that said, if you happen to be one of the lucky ones who either used the MobileMe calendar beta or were already syncing calendars with MobileMe from iCal, you can upgrade to the new MobileMe with (probably) no problems. The Apple support note, “MobileMe: Setting up the new MobileMe Calendar” provides a number of useful links to help you navigate through the calendrical madness.

Is It Worth the Bother? — The new features and improved performance of the revamped MobileMe calendar Web app are not trivial, and, if you can get over the initial hurdles, you may like them a lot. I do. (For more help with the new features, see Joe Kissell’s just-released “Take Control of MobileMe, Second Edition.”

But if you have any software that doesn’t do CalDAV, or if you have workflows that depend on the older calendar configurations in iCal and on MobileMe, or if you are running a version of Mac OS X prior to 10.6.4, you may want to sit this one out for a while. Although Apple encourages you to update, you don’t have to: the older MobileMe calendar format still works. Just don’t push that Upgrade Now link.

Comments About The New MobileMe Calendar: Should You Upgrade?