Much as I’m impressed by Apple’s industrial design with the iPad, I sometimes wish they had used the polycarbonate plastic from the early iPhones for the iPad’s back. The aluminum is a little slick, and there are times when I’m holding it that I’m a little worried that it’s going to slip from my grip. Plus, although this hasn’t affected me personally, I could see someone’s hand getting tired of gripping an iPad for an extended period of time.

That concern was the impetus behind the invention of the Hand-e-holder, a clever device that in essence enables you to palm an iPad much as Michael Jordan would palm a basketball, but with no effort and virtually no chance of dropping it. However, it was running, not basketball, that led to the invention: the Hand-e-holder was developed by Burns Computer Services (BCS), a pioneer in the computerized timing of races. I was introduced to BCS founder Mike Burns by some mutual friends who had just written an iPad app called iResults for BCS and who knew that I was interested in both iPads and running.

BCS’s goal with iResults was to enable the organizers of large running events (a big race can easily have tens of thousands of participants) to equip volunteers with iPads (linked wirelessly to a results server) to show race participants the finishing times, places, and splits immediately following the event. For waiting friends and family, iResults could also be used to display runners’ progress as they pass various check points. But, as Mike Burns told me, one problem quickly became obvious—sooner or later a volunteer would inevitably drop an iPad by accident. At $499 per iPad, that’s an expensive slip.

Hence, the Hand-e-holder, which, while it can be helpful for any iPad user, is particularly useful for medical professionals, delivery people, mechanics, cooks, or anyone who needs to hold and display the iPad securely. Nonetheless, there’s nothing iPad-specific about the Hand-e-holder at all: it works just as well with a Kindle DX, a clipboard, or one of those whiteboards that basketball coaches use to diagram plays. 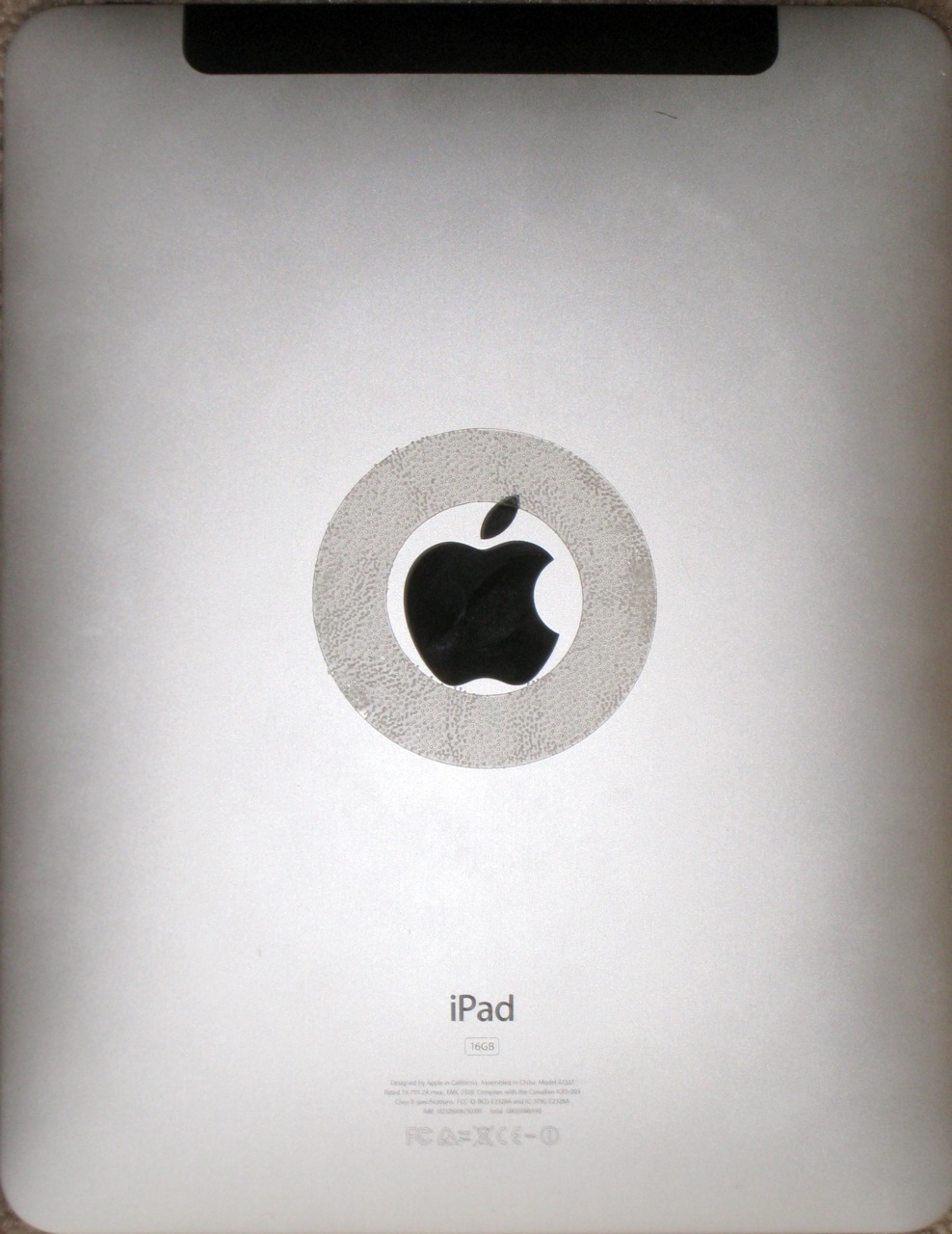 When I demoed the Hand-e-holder at a recent meeting of the Oneonta Mac user group, there was a collective gasp from the attendees when I stuck my hand into my laptop bag, slipped it into the Hand-e-holder, and then pulled the iPad out and held it up without gripping it by the edge. Another gasp came when I turned my hand over as though I was palming a basketball, since the iPad was poised to fall to an untimely death if the Hand-e-holder hadn’t kept it firmly attached to my hand. 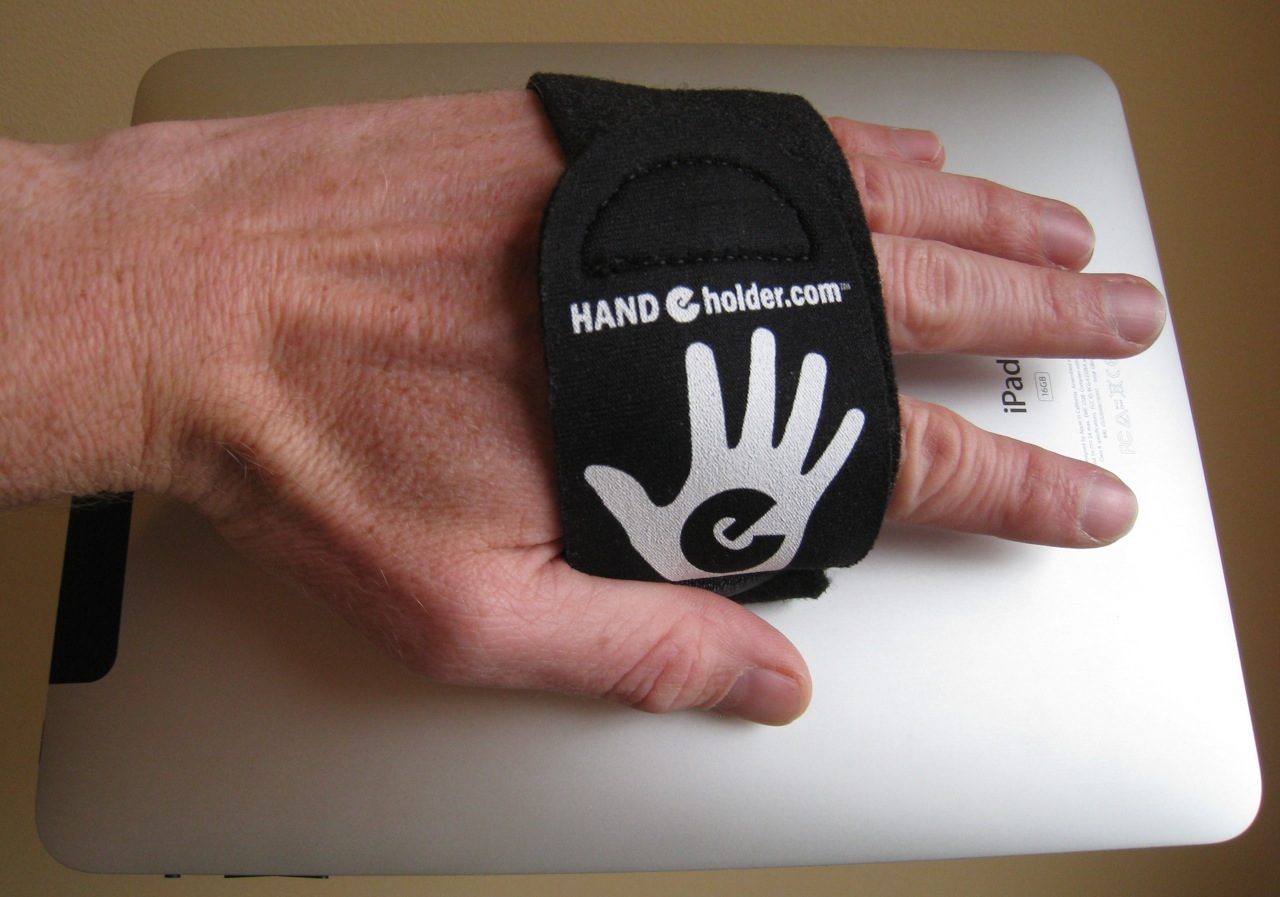 So is there any concern that the Hand-e-holder might lose its Dual Lock grip on the iPad? None that I’ve seen yet, and honestly, I’m not at all worried. 3M’s Dual Lock fasteners use hundreds of interlocking mushroom-shaped protrusions that snap together—we’re talking way beyond Velcro here. Apparently, breaking the Dual Lock connection by pulling straight up and down would require 170 pounds of pressure, which would likely do something bad to the iPad well before the Dual Lock let go. For a video
demonstration of just how much confidence Mike Burns and crew have in the Hand-e-holder and the Dual Lock fastening system, watch the video of them playing ping pong using Hand-e-holder-equipped iPads as paddles.

But Dual Lock is indeed a removable fastener; the trick is that its shear strength (pressure applied parallel to the back of the iPad) is only 8 pounds. This means you can easily detach the Hand-e-holder from the Dual Lock ring on the back of the iPad if you need to insert it into a case or the like. Just catch the edge of the bottom disc with your finger tips, and use a peeling motion to detach it.

In fact, the hardest part of getting started with the Hand-e-holder is attaching the two Dual Lock pieces together; you have to press down just a bit harder than feels right. You can align one edge and push down, then press down on the opposite edge to finish the job. There’s a nice pop as the Dual Lock mushrooms mesh with one another.

Gotta Hand It to You — I’ve found that I leave the Hand-e-holder attached to my iPad all the time, since it’s almost always easier to slip my hand into the neoprene strap than to grip the edge of the iPad (which I can still do, if I’m just picking it up for a few seconds). Attached as it is to the center of the back of the iPad, it doesn’t get in the way of docking the iPad in the iPad Keyboard Dock. If you have a form-fitting case like the Apple iPad Case, you can cut out a circle so that the Hand-e-holder’s Dual Lock ring shows through; watch the
video for instructions. 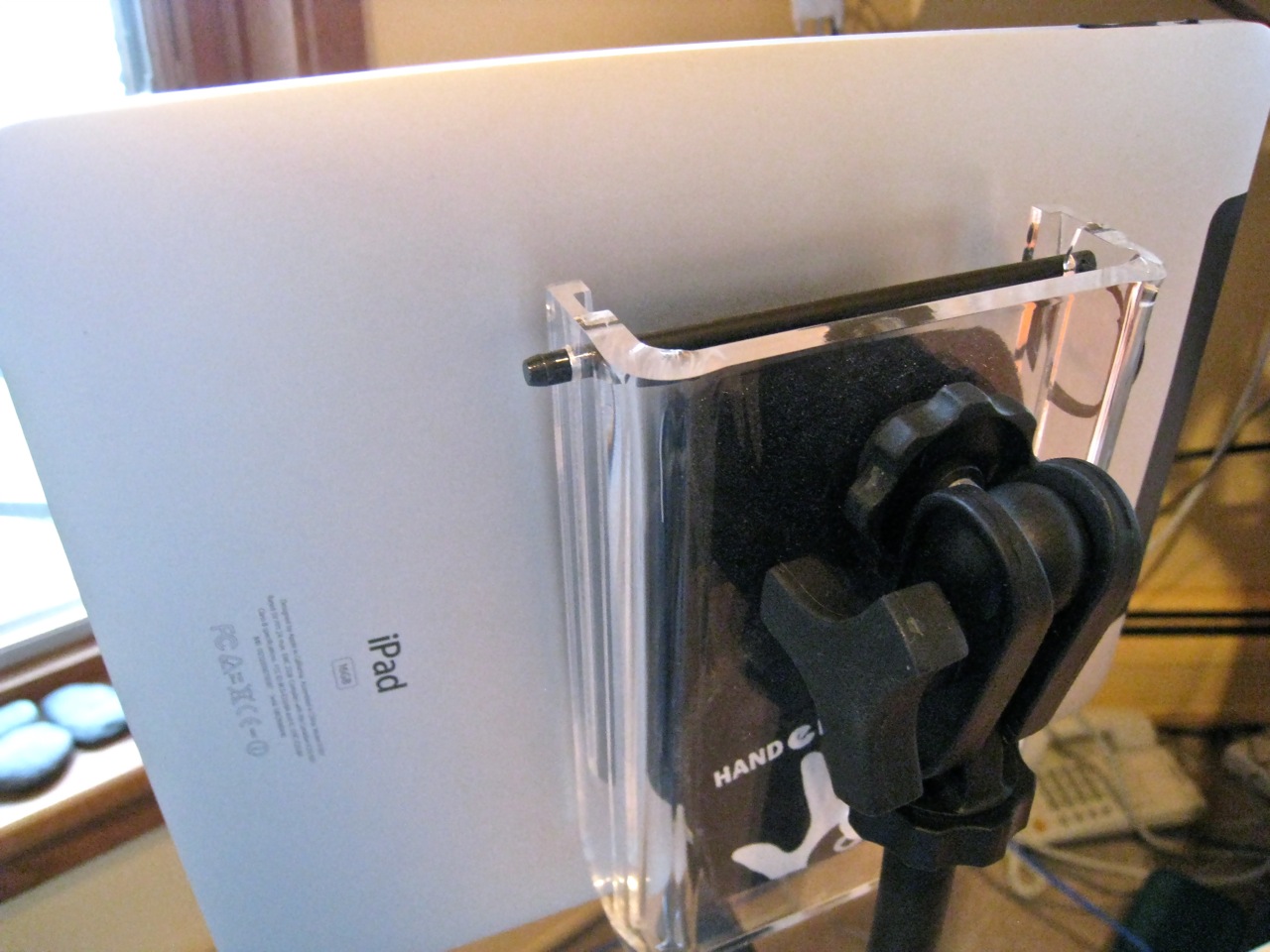 You can buy the Adapter Plate by itself. It has a pair of screw holes so you can attach it to a wall, which might be an especially good way to display the iPad in picture frame mode or to mount it at eye-level in a kitchen.

However, the Adapter Plate is more commonly used with stands. Hand-e-holder currently offers three basic stands in different designs: a tear-drop base, a rectangular base with a groove to hold an Apple Wireless Keyboard, and a single-piece acrylic stand. More interesting, though, are the specialty mounts: a tripod with non-skid feet, 1.5- and 2.5-inch C-clamps, and a spring clamp. And, for you pilots accustomed to keeping maps and flight plans on a kneeboard that straps around the thigh, a Leg Strap Kit makes it easy to attach an aviation app-equipped iPad to your thigh instead. (The screenshot shows the tripod and the spring clamp stands, and my iPad is floating next to my desk courtesy of the C-clamp stand.) 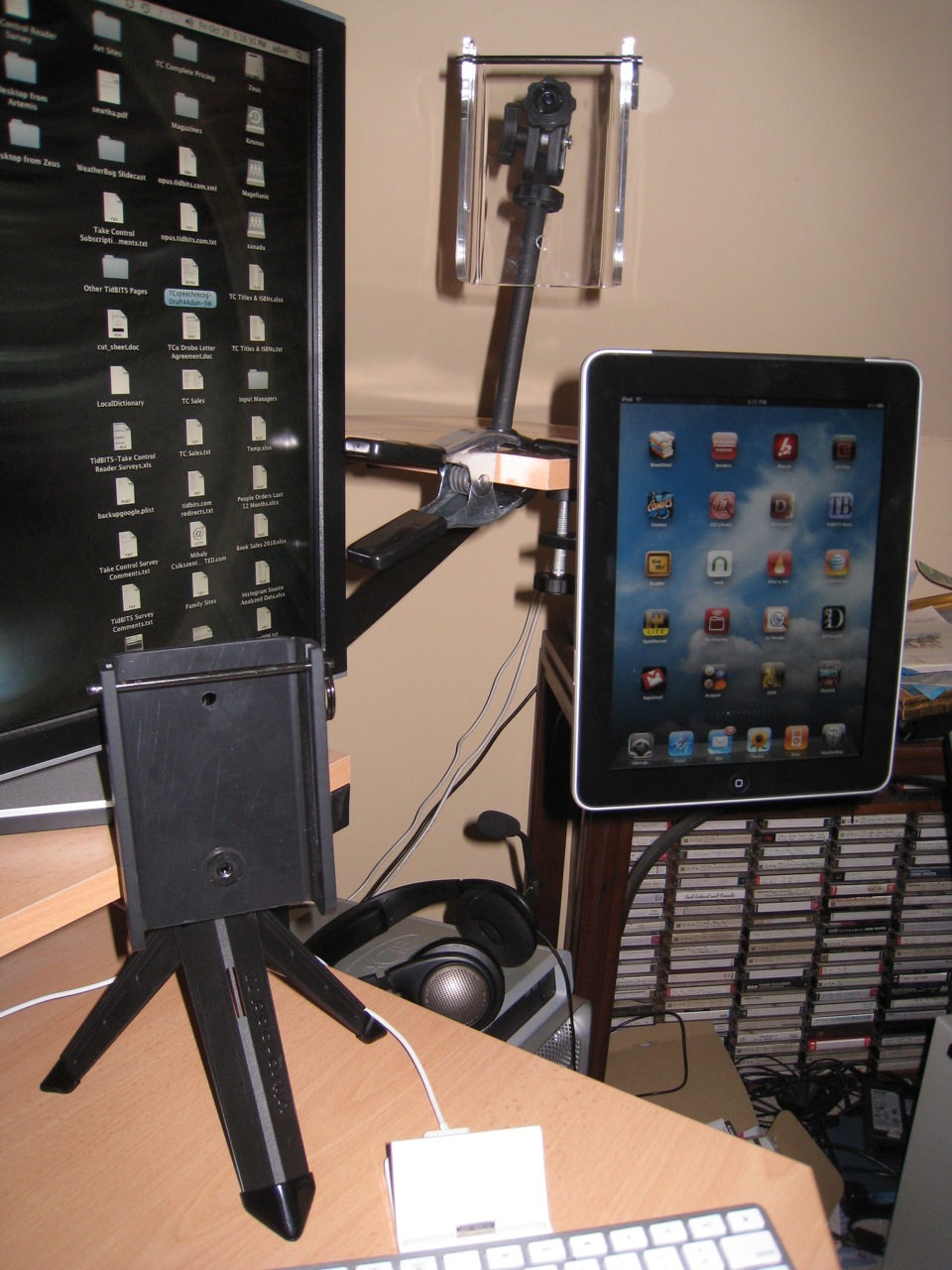 Adjustment knobs on all the various stands and mounts make it possible to position the iPad in a wide variety of angles and orientations, and the Hand-e-holder folks are always interested in hearing about specific needs. For example, they made a C-clamp mount with a long, straight arm for a professor who wanted to use an iPad to display research results at a conference. For the security-minded, they’ve made versions that replace the Dual Lock fasteners with unremovable standard adhesives and coupled them with
screw-attached mounts and a lock that fits into the hole at the top of the adapter plate.

The prices seem a touch high, but Mike Burns said that he refuses to outsource manufacturing to China when so many people in his home state of Michigan need jobs. Otherwise, I haven’t found much about the Hand-e-holder to criticize. Some of the stands, while highly functional, aren’t as elegantly designed as other iPad stands I’ve seen. Furthermore, the retention pin, which is separate from the Adapter Plate used by each of the stands and mounts, is the sort of thing that can be lost quickly unless you attach its keyring to the mount with some string. And lastly, I can see the Hand-e-holder being incompatible with certain other cases.

But in the end, the Hand-e-holder is a neat solution to a particular problem that many iPad users may have, and it’s well worth checking out if you want a better way to hold and display your iPad or similarly shaped object.

Comments About Palm Your iPad with a Hand-e-holder