Apple’s introduction of iMovie ’11 focused largely on the new Movie Trailers feature, audio editing improvements, and One-Step Effects for automating common editing operations. Those are just the highlights, however. Here are 15 features and bits of trivia you may not be aware of about the latest version of iMovie.

View Entire Portrait Photos — When you add a still photo that’s oriented vertically, iMovie automatically crops it to fit the project’s horizontal aspect ratio, which means you end up with only about one third of the photo visible. Click the new Allow Black button in the Viewer to include the entire photo (with black bars on the edges). 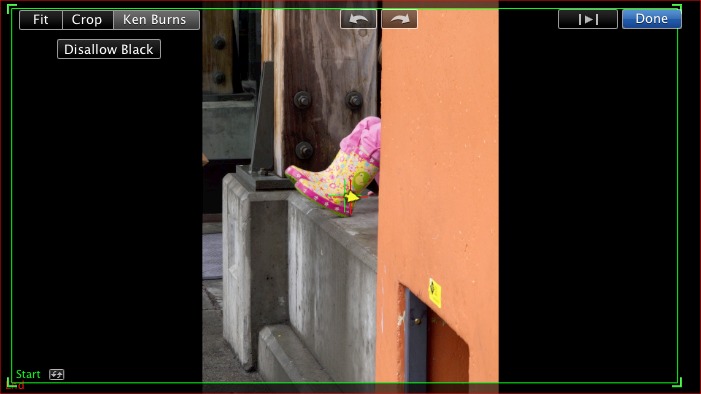 Photos Appear in Viewer — Speaking of photos, when you click a thumbnail in the Photo browser, the image now shows up in the Viewer so you can get a better look at it. Also, pictures you import sport a green checkmark icon. 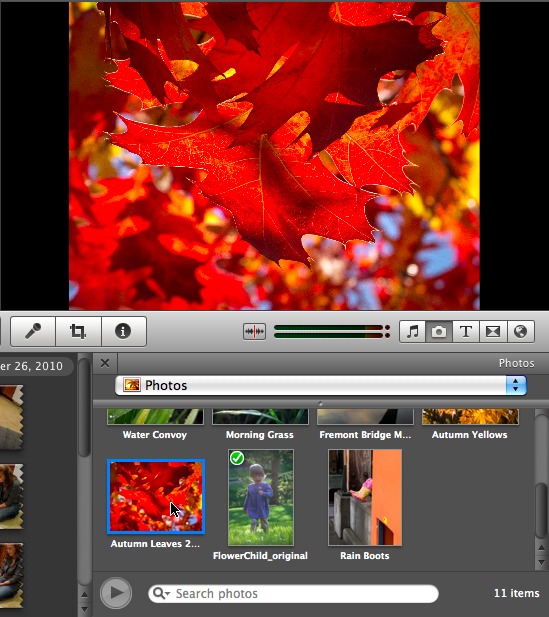 Rolling Shutter Fix — Here’s an addition that could be very helpful, depending on the type of camera you own. Many still cameras capture images using a CMOS sensor, which records every shot in horizontal bands from top to bottom. When used to capture video, that technique can produce an effect called a “rolling shutter”: objects in motion appear rubbery because they’ve moved slightly by the time the sensor records the entire frame.

iMovie can now attempt to compensate for the effect. Double-click a clip, or select it and press the I key, to bring up the Clip inspector. Mark the Stabilization: Smooth Clip Motion checkbox to analyze the clip (if it hasn’t already been analyzed separately). When that’s done, click the Rolling Shutter: Reduce Motion Distortion checkbox, and choose one of the four options from the Amount pop-up menu (Low, Medium, High, Extra High). 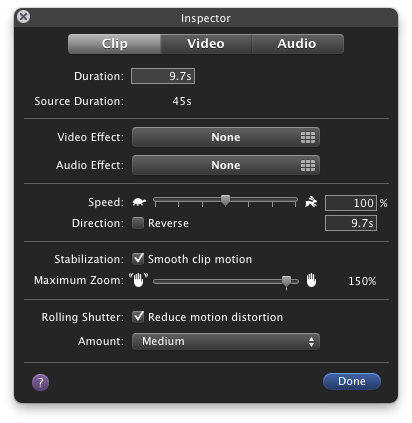 This feature isn’t a magical cure-all; Apple says it works best on footage where the camera is panning left or right. But it can fix wobbly video that might otherwise be unusable.

Side by Side Edit — iMovie ’09 introduced a Picture-in-Picture edit that lets you play two clips at once, with one appearing in a small box in a corner of the screen. iMovie ’11 takes the same idea and adds a Side by Side edit that splits the screen vertically. Drag a clip onto the top of another clip in your project and then choose Side by Side from the action menu that appears.

In the Clip inspector, you can choose whether the added clip appears on the left or right side of the screen, and whether the image slides into frame from the side. 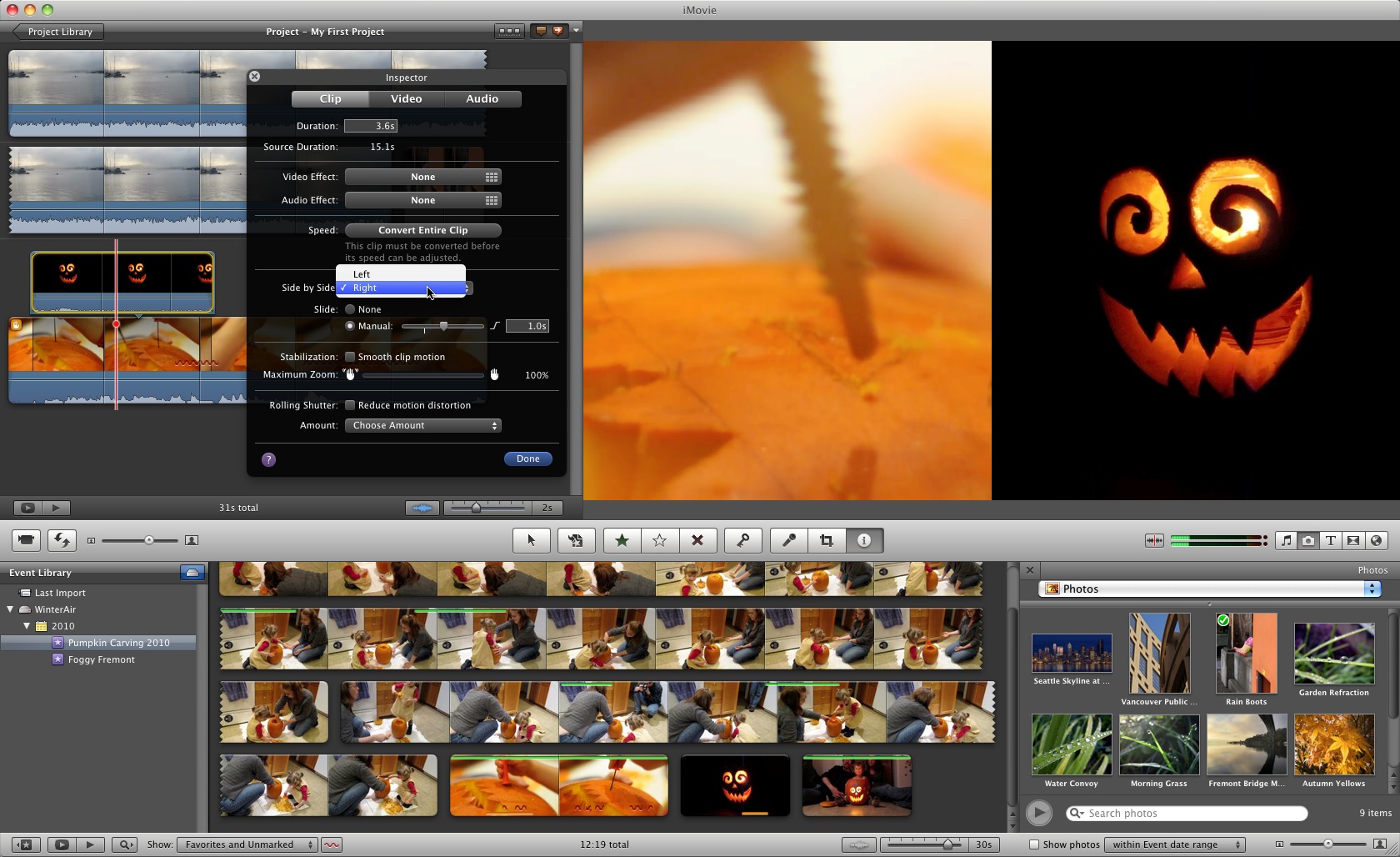 Blue Screen — Another new edit is Blue Screen, which makes blue areas of a video transparent. iMovie ’09 introduced a Green Screen feature for swapping out backgrounds or other effects—you shoot footage against a green backdrop, then replace the background with an image or other video in iMovie. The problem, of course, is that any green items in the shot, such as clothing, would also become transparent. Blue Screen gives you another option if you happen to shoot things that are often green.

iMovie Drop Box — Following the lead of iTunes, iMovie now has an iMovie Drop Box folder, located at ~/Movies/iMovie Events. If you want to add a lot of movie files in the Finder, add them to that folder; the next time you launch iMovie, you’ll be asked if you want to import the videos.

Change All Title or Transition Styles — If you decide to change the style of an existing title, you can drop a new style onto the section of the clip the title occupies (the video clip turns bright blue to indicate you’re affecting the title). Now, when you replace a title style, iMovie asks if you’d like to replace just the one title or all titles in the project. The same option applies to replacing transitions, too. 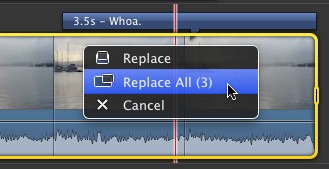 Quickly Jump to Titles — When the Advanced Tools option is enabled in iMovie’s preferences, the Comment marker and Chapter marker tools become visible in the upper-right corner of the Project browser. Clicking the downward-facing triangle just to the right of the buttons lists all the markers you’ve placed in your movie, letting you jump to those sections quickly. In iMovie ’11, that list now also includes all titles in the project. 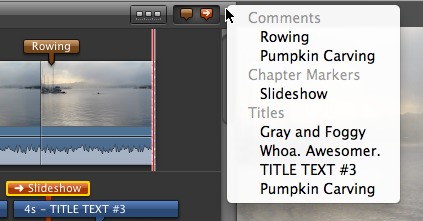 Movie Trailer Customization — The movie trailers that you can create are fairly rigid in the number of clips that are included, because the edits are timed to the background music. (You can convert a movie trailer to a regular project and then edit it as you wish, however—choose File > Convert to Project.) Several of the trailer templates offer customization options.

For example, in the Pets trailer, you can choose whether the trailer is about a dog, cat, horse, or monster, with accompanying animal track images based on your selection. 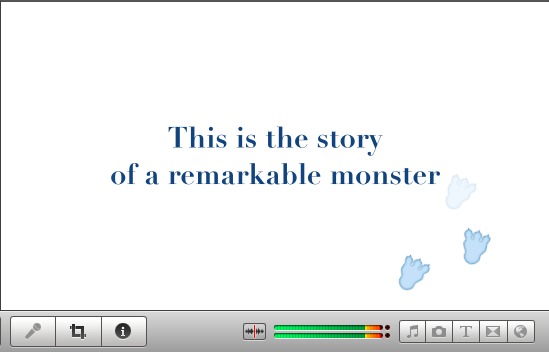 In the Blockbuster, Friendship, and Travel trailers, you can set between two and six cast members; there are five different music tracks to accommodate the changes, all timed correctly.

Made with Morse — Speaking of trailers, you can choose which studio logo appears at the front. In the Signals Across the Globe trailer, the music that plays in the background is actually Morse code for “Made with iMovie.”

Still More Trailer Trivia — That spinning globe studio looks awfully familiar, doesn’t it? To avoid any legal entanglements, Apple made sure that you can’t type real movie studio names in the logo sequences, such as Universal or Paramount; the names are replaced with three dashes.

Also, when choosing a trailer style, if you watch the preview for the Action trailer, the character of “Matt” is actually iMovie developer Randy Ubillos.

Quick Mute a Range of Audio — iMovie ’09 let you mute a clip quickly: with an entire clip selected, press Command-Shift-M to mute the track. That still works in iMovie ’11, but you may not want to mute the entire clip. Instead, select a range in a clip’s audio waveform and press the Delete key to drop the volume level to zero. Pressing delete on a range that’s been edited returns it back to its default.

Cloudy Forecast — If you add the Blue Marble Globe map, bring up the Clip inspector and enable the Show Clouds option to add a light layer of cloud cover. Also, a Show Route Line/Cities option lets you turn off the Indiana Jones-style travel line and city labels if you wish.

Avoid Skim Drift — Skimming is an integral part of working within iMovie: whenever your mouse pointer appears in the Project browser, the playhead appears and the current frame is shown in the Viewer. Sometimes, as you’re dragging, your pointer may drift up or down and out of a row (unless you’re being very deliberate about moving your mouse or finger on a trackpad perfectly horizontal). If this happens to you frequently, as it does to me, hold down Option and Shift when skimming. The cursor is held in the middle of the row, even if you drift with the mouse pointer.

More to Discover — These are just some of the bigger changes in iMovie ’11. There are a lot more tiny details in how the program works, such as animated panel openings and closings, the capability to split detached audio tracks using the contextual menu, and direct import from an iPhone. Although movie trailers have gotten the bulk of the attention, this version of iMovie is a pretty deep update. (For more details, see the “First Look: iMovie ’11” and “iMovie ’11 Review” articles I
wrote for Macworld.)

Comments About 15 Secrets of iMovie ’11