Google Voice is now a real boy. The 15-month-plus period in which Apple maintained that the app was in a Schrödinger cat box—neither accepted nor rejected—has finally resulted in the free app becoming available. Apple and AT&T both changed policies about calling apps, whether they use voice-over-IP or rely on built-in cell calling systems. (See “Apple Responds to FCC’s App Store Questions,” 21 August 2009.) 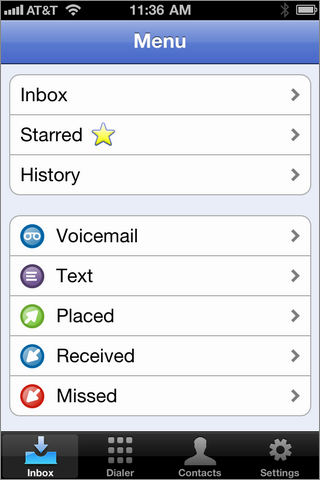 For the last year, Google Voice has been available through an HTML5-compliant Web app, but one that couldn’t match the precise set of capabilities and utility of a standalone app, including dealing with background incoming calls, push notifications, and the like.

Since Apple held up allowing (or rejecting) Google Voice, Skype, Line2, and Vonage, among others, have been approved. All three programs use VoIP to place calls over 3G and Wi-Fi. (Vonage switches to your regular calling service for domestic U.S. calls when you’re not connected to a Wi-Fi network.)

Google Voice, however, doesn’t use VoIP at all. Instead, it relies on your cell voice plan, using call-around numbers to place your U.S. and international calls, and to handle incoming calls. Google Voice is more of a management hub for phone calls, voicemail, and messaging than a calling service, even though it offers decent outside-the-U.S. per-minute rates. For more details on Google Voice’s offerings, see “Google Voice Opens to All Americans,” 22 June 2010.

Google embedded a nifty joke—or, at least, I think it’s a joke—in the screenshots that currently appear in the iTunes Store listing. Note that the topmost message shown in the Inbox screenshot is from 6 July 2009, about the time the app was initially submitted to Apple and placed in purgatory. 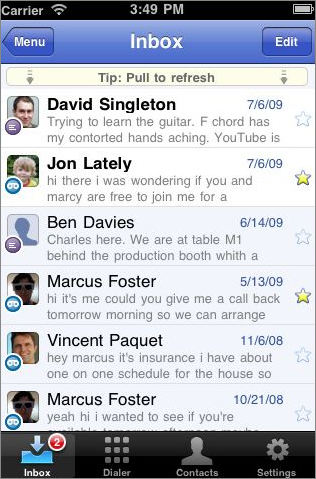