Road warriors appreciate the MiFi, a neat device that creates a mobile Wi-Fi hotspot using a 3G cellular data connection as its backhaul to the Internet. The same feat can be accomplished with a few smartphone models and cell carriers’ support, but there’s no way to share an iPhone’s 3G data connection with nearby devices over Wi-Fi—such as an iPad, iPod touch, or even other computers. The tethering feature finally enabled for U.S. iPhone owners by Apple and AT&T in iOS 4 allows only a single computer to connect via USB or Bluetooth.

That inability makes the Nexaira Business Class II 3G/4G Wireless Broadband Router more notable. As sold through 3Gstore with a particular firmware update, the $189.99 router can create a mobile hotspot from an iPhone using USB-based tethering. In this configuration, the router acts just like a host computer would to relay data to and from the iPhone over USB, with Internet access from the iPhone’s 3G data connection. The BC2 has an 802.11n Wi-Fi radio and a wired Ethernet port for local networking. (A second Ethernet port can be connected to a broadband modem, so that
the iPhone connection acts as a backup if the broadband connection goes down.) 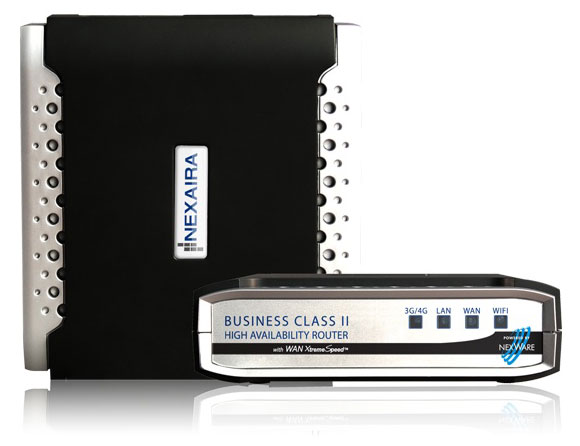 The Nexaira BC2 is a bit bulky, and requires plug-in power via an included AC adapter or a DC car inverter sold separately for $25. (In contrast, the MiFi is battery-powered.) Nonetheless, the Nexaira BC2 might fit the bill for some frequent travelers, especially those who work or travel in groups. The iPhone charges while plugged into the router.

Using the Nexaira BC2 with the iPhone doesn’t require jailbreaking the phone to use third-party software unsupported by Apple. Tethering involves ordinary communication over USB, although an iPhone may first need to be connected to iTunes on a Mac or Windows system to download a profile after tethering is added to your data plan. (In my recent testing of iPhone tethering, I had to connect to iTunes before tethering would work, but only the first time.)

No one at TidBITS has prior experience with 3Gstore, which currently has the exclusive rights for this particular firmware release for the router, nor with the Nexaira BC2 router. Nonetheless, we’re seeing no red flags about the product or the claims. It’s only Apple’s cussedness and carrier concerns that prevent an iPhone from being used as a mobile Wi-Fi hotspot by itself. With metered subscription plans, carriers are paid for usage, so it has been entirely unclear why they wouldn’t promote hotspot tethering services in the phone.

AT&T charges $20 per month for tethering, and requires the $25-per-month DataPro plan, which includes 2 GB of data transfer, and adds $10 for each 1 GB consumed in part or whole thereafter.

The Competition — Sprint, T-Mobile, and Verizon Wireless each offer a limited selection of smartphones that can create a mobile hotspot using the phone’s built-in Wi-Fi capabilities; fees vary. (The Android OS 2.2 release includes tethering and mobile hotspot features, but carriers have largely disabled or disallowed it in the United States.)

The Nexaira BC2 works more or less like a MiFi sold by Verizon Wireless or the various models of 4G and 3G/4G Spot routers offered in Clearwire’s Clear limited service areas. The MiFi and the Spot are compact enough to fit in a shirt pocket and sport multi-hour batteries.

Verizon offers the MiFi with an iPad as a bundle for what works out to be $130, and has service plans of $20 to $50 per month for 1 to 5 GB of included data. Purchased separately, the MiFi requires a two-year contract and a $60-per-month 5 GB service plan. (For more details, see “iPad Arriving at Verizon Wireless with MiFi Option,” 14 October 2010.)

Virgin Mobile also has a MiFi on offer—for use only on Sprint’s network—for which you pay $150 up front, and then purchase 10 days of service and up to 100 MB of data for $10, or unlimited data use for $40 during a 30-day period.