I’ve had a hard time getting excited about most iOS device cases and stands, apart from the highly functional Hand-e-holder (see “Palm Your iPad with a Hand-e-holder,” 29 October 2010). That’s because I’m far more interested in function than fashion, and I’m pretty good at treating portable electronics gently.

Nevertheless, when Apple was giving away iPhone 4 cases to address the antenna issue, I got the Incase Snap Case, even though I hadn’t experienced any problems with reception. Incase’s shell case turned out to be just about perfect for my situation. It was clear, so it didn’t hide the iPhone’s excellent industrial design or muck it up with garish plastic. It was smooth like the iPhone, so I could still slip it in and out of my pocket easily. It didn’t obstruct any of the iPhone’s ports or buttons. And best of all, it was thin enough on the bottom that I could still dock the iPhone with the case on. Perhaps it didn’t provide much protection, but I didn’t want
much protection.

So I was initially dubious when a PR rep contacted me to ask if I’d be interested in checking out the new Vario case for the iPad and Teatro case for the iPhone 4 from ZeroChroma. But I become more intrigued when I saw their industrial design: both shell cases include a truly clever stand that flips out and holds the device at a variety of angles in both portrait and landscape mode. Both are made of rigid matte plastic, and are just a tiny bit less slick than the Snap Case. Neither is perfectly smooth. 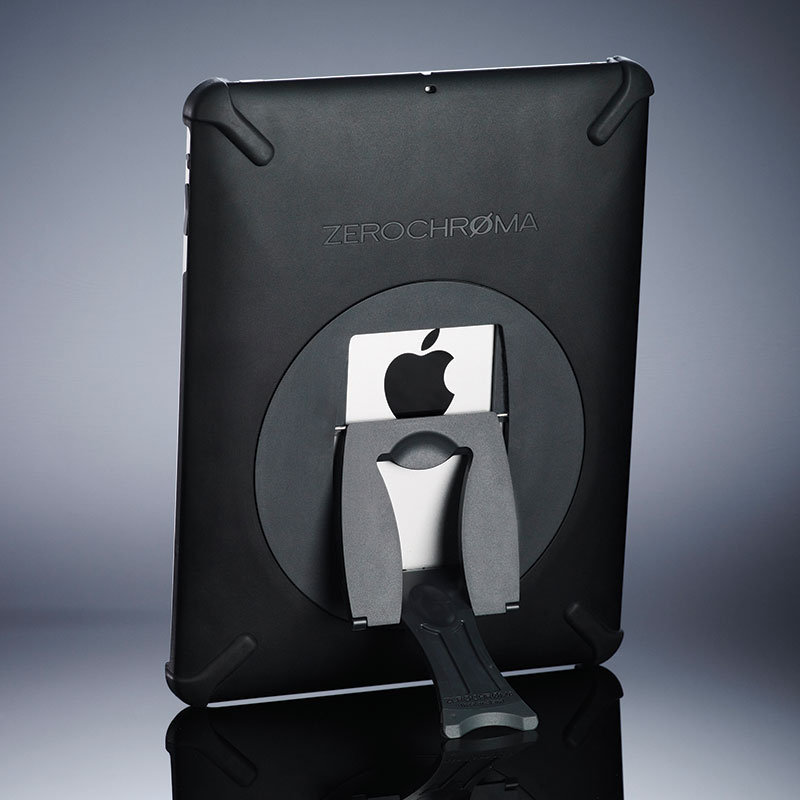 The $44.95 Teatro case for the iPhone 4 is slightly wavy on the sides, for a better grip, and it has a recessed dimple in the back, right where you’d want to put your index finger normally, again to improve the grip. It also has a hard rubber rim around the back edge that prevents the case from slipping when propped up, and a few tiny shock-absorbing rubber bumpers inside.

The $69.95 Vario case for the iPad lacks those grip-enhancing features and slip-resisting rim, but sports internal hard rubber shock absorbers and hard rubber bumpers at each corner. Due to the curvature of the iPad and the case, the bumpers don’t touch the surface when the iPad is laying flat, but they could provide some protection from a short drop (no, I didn’t test this). The bumpers also keep the iPad from slipping when it is propped up.

What sets both cases apart from the crowd is the integrated stand. Many iPad cases, in particular, flip around in some way to provide a stand of sorts, but most are limited to a couple of angles. ZeroChroma’s cases provide many more angles by incorporating a fold-flat hinge that can assume either 14 (iPhone) or 16 (iPad) positions. Even cooler is the way the two-piece hinge is inset in a rotating circular piece of plastic that clicks into place every 90 degrees, so that you can prop your iPhone or iPad up at nearly any portrait or landscape angle you wish. In my review units, the iPhone case’s stand was both easy to operate and sturdy; the iPad case’s stand was quite a bit stiffer to operate because of its thicker plastic, but was
still perfectly sturdy. (If I can find some graphite, I might lubricate the iPad case’s stand with a tiny amount of it.)

ZeroChroma claims that the Vario case for the iPad works as a hand-holder, and while it’s better than nothing in some situations, if I wanted to hold the iPad for more than a couple of minutes, I’d use the Hand-e-holder instead. Speaking of which, the Vario fits nicely over the Hand-e-holder’s 3M Dual Lock ring that’s attached to the back of my iPad. The Vario case has another nice touch: I can flip the iPad over and insert it face-down in the case to protect the screen when I put it in a bag or backpack.

The only significant downside to both cases is that they’re too thick to allow the iPhone or iPad to be docked. Since Incase’s Snap Case allows the iPhone 4 to dock, it seems as though the Teatro could have just slightly thinner plastic on the bottom to allow docking. The Vario, however, would require a more-significant cut-out to allow an iPad to dock.

Despite the inability to dock the iPhone or iPad while they’re in these cases, I’m quite happy with them. Although entire days may pass when I don’t pop out the built-in stand, when I do find myself wanting to prop up the iPhone or iPad, the stand is right there, waiting to be used. When I use cases that lack integrated stands, I find myself either wandering around trying to find a stand or just giving up and propping up my device on whatever object happens to be handy, which usually results in an unsatisfactory reading angle and always leaves me with the nagging worry that I’ll accidentally knock the device over and damage it.