Perhaps my favorite piece of consumer electronics over the past five years has been the car navigation GPS device, and I’ve reviewed a slew of them in TidBITS in that time (see our series “Find Yourself with GPS”). But don’t go looking for most of those models because they likely aren’t available any more—the field moves quickly, rendering older models obsolete.

My dirty little secret is that although I recommended these devices to friends and relatives, I never bought one for myself, since they were never quite perfect (though I liked the Garmin nüvi 255W quite a lot). I could see that the state of the art kept changing, and I didn’t want to get stuck with a model that suffered greatly in comparison with later incarnations. You’ll also notice that the last review in that series compared the device to early iPhone GPS navigation apps, G-Map and AT&T Navigator. I didn’t feel that I could quite trust either of those in stressful driving situations.

Hence my gift suggestion this year, for anyone who has an iPhone and could use navigation help when travelling in unfamiliar environs, is a GPS iPhone app I’ve tested extensively and feel comfortable recommending: Navigon MobileNavigator (hereafter referred to as Navigon). Put simply, Navigon is as good as or better than every standalone GPS device I’ve used, with only a few minor qualifications.

I hope by now that most people understand what car GPS navigation is about. You enter your destination, and are given the “best” route. As you drive, you’re given turn-by-turn directions complete with street names, spoken aloud so you can keep your eyes on the road, not on the constantly updated map. If you take a wrong turn or if the GPS makes a mistake (hey, both happen), it calmly recalculates and gives you new directions.

Well, Navigon does all that brilliantly. Its voice is clear and understandable, its map is extremely readable and accurate, and while I can’t say that it has always directed me perfectly, it has always gotten me to my destination along a reasonable route. (One tip: if you know an area well, the GPS’s directions will inevitably disagree with your favorite routes, although in an urban environment it might also teach you some previously unknown shortcuts.) 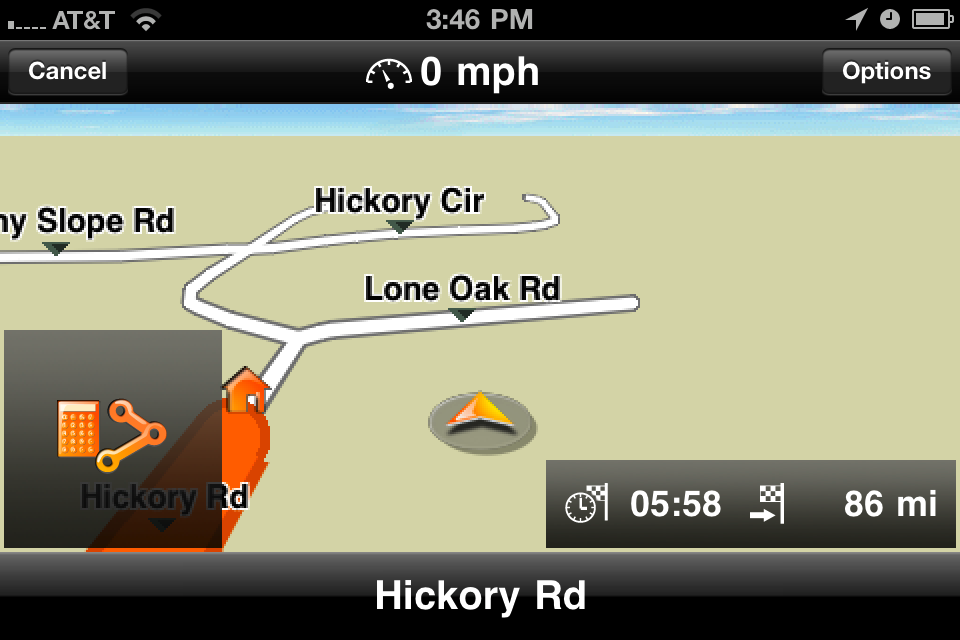 What sets Navigon apart are its extras. You can enter addresses manually, find them from your contacts, search for built-in points of interest, and—this is huge for when the points of interest database fails you—do a Google Local Search right from within the app. Once you’ve specified a destination, Navigon tells you what the weather conditions are there, and lists nearby points of interest that may be useful. Tapping Start Navigation then presents you with several possible routes, which is nice when you have a rough idea of which
way you’d like to go. 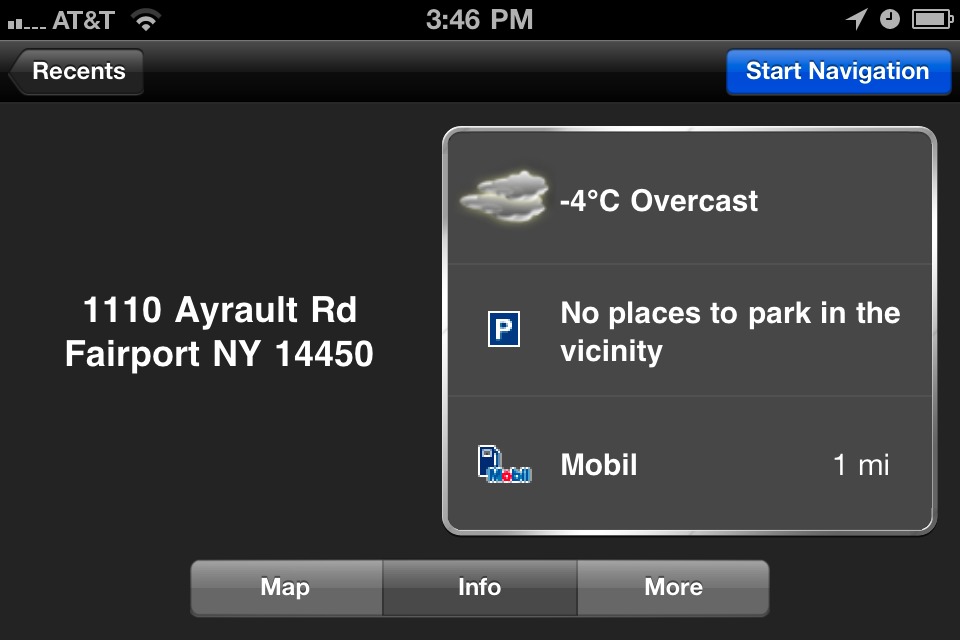 You can even tell Navigon if you’re biking or walking, so it calculates speed correctly, and walking directions are presented in a way that makes more sense when you’re strolling city streets. Speaking of speed, there’s an option when driving to alert you (with the single word “Caution”) when you exceed the posted speed limit by more than a user-specified amount; you can even set that amount separately depending on whether or not you’re in an urban area. Navigon works well in both portrait and
landscape modes, unlike some other GPS apps I’ve used. I also really appreciate the fact that Navigon can automatically silence music or pause an audiobook or podcast to speak its directions, rewinding a few seconds in audiobook mode so you don’t miss anything. Finally, Navigon looks and works like a true iOS app, with native controls and integration, rather than the truly funky interfaces that many other GPS apps have ported from their companies’ standalone devices.

Although Navigon isn’t perfect, the mere fact that it’s an iPhone app means that it keeps changing and improving. In fact, that’s part of why I haven’t reviewed it before this; every time I’d get close, a new version would force me to revisit the entire app. In various versions, its displays have improved and changed, live traffic information has become available as an in-app purchase (I haven’t tested this; there is no traffic where I live), connections to Facebook and Twitter have been added (I don’t use this, since I don’t want to clutter my followers’ brains with where I am at any given time), and more. And because it does receive updates, map changes can also be built in, whereas they’re often an extra purchase
for standalone GPS devices.

I have only a few real criticisms of Navigon. First, it’s somewhat slow to start up, which used to be more of a problem before iOS 4’s multitasking and fast app switching, although it’s still annoying when I can’t start driving until I have directions. Plus, if I launch it immediately after leaving a building, it can sometimes take longer than I’d like to get a GPS lock, forcing me into a useless and confusing simulation mode until it catches on. A single screen for entering addresses would be easier than the multi-screen approach now, with one screen for each aspect of the address. And finally, sometimes it can be a bit chatty; I’d like an option to control how often it speaks. But as I noted, because Navigon is an app,
these criticisms could be eliminated by updates; previous annoyances I’ve had with the software have disappeared.

You will likely want some sort of a device to hold your iPhone in a good viewing position in the car, along with a car charger (like the standalone GPS units, an iPhone running a GPS app has a battery life of only about two hours). Lastly, although I have no experience with this, Navigon theoretically works on the iPad and iPod touch as well, though I imagine it would require a 3G iPad or, for the iPod touch, the Magellan Premium Car Kit for iPhone and iPod touch, which provides a GPS receiver for the iPod touch (though its reviews on Amazon are decidedly mixed).

Navigon comes in a variety of editions that differ only by their internal maps. A full United States and Canada version costs $59.99 right now, a U.S.-only version costs $49.99, and there are three versions for the Eastern, Central, and Western areas of the United States that are $29.99 each. Prices for versions with maps of other countries range from $59.99 to $119.99.

While all those prices may sound high for iPhone apps, they’re notably lower than a standalone car navigation GPS device would be, and for something that works better, improves regularly, and won’t leave you with another device in your drawer in a few years.