Of all the software that makes sense to update automatically, Dropbox is high on the list, given the way the application works silently (unless you have it Growling its changes) in the background to synchronize the contents of your Dropbox folder with those with whom you share it. (We rely heavily on Dropbox for Take Control, with authors and editors working on files in Dropbox so everyone always has the latest version of in-progress files without the need for manually copying or sending via email.)

And although auto-update is listed as a feature of the previous version 0.7.110, either it’s not working perfectly, or Dropbox hasn’t yet pushed the update to the recently released version 1.0.10, which is a major update. So, you may need to download and install the update manually. To determine what version you have, hover the cursor over the little blue Dropbox icon in the menu bar; a yellow tooltip reports the version and update status.

But you’re going to want to update. With Dropbox 1.0.10, the folks at Dropbox have added Selective Sync, which enables you to choose which folders are downloaded to which computers, so you can keep home and work files separate, for instance, or prevent a large folder from taking up space on your MacBook Air’s small SSD. (The Advanced button lets you exclude sub-folders rather than just top-level folders.) 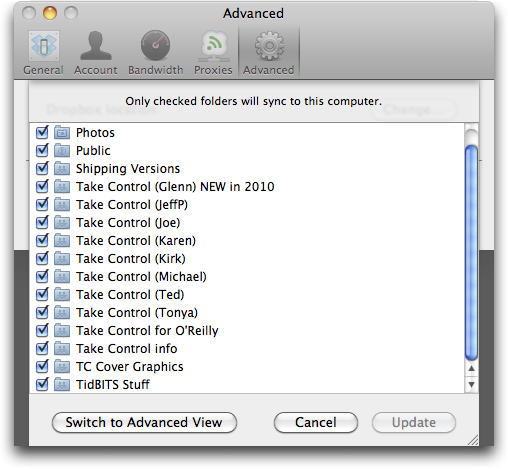 Also important in the new release is improved performance, with Dropbox re-architecting the client-side sync engine to reduce response time and resource consumption—memory usage has dropped by up to 50 percent in this release—and to scale to millions of files. Dropbox still requires that shared folders be located in the Dropbox folder (which can be located anywhere on your disk, as set in the Dropbox Advanced preferences), rather than enabling syncing to arbitrary folders, which is a bit too bad, but perhaps
that’s coming after the company confirms the performance of the new release in real-world testing.

Other changes include support for syncing resource forks, which is important for applications whose documents (Quicken, QuarkXPress, and OmniGraffle, for instance) still store data in the resource fork. Dropbox also claims to have spent thousands of hours fixing tweaky issues surrounding things like “invalid file names on Windows, weird Unicode normalizations, Word and Excel file locking, abnormal symlink hierarchies, case sensitive file systems on Mac, and TrueCrypt support.” So, if you’ve run into an edge case where Dropbox didn’t work well in the past, it’s worth trying again. Lastly, the initial setup wizard has been updated, Dropbox’s menus have been re-organized, and the Mac OS X client is now pure Cocoa.

On the downside, because Dropbox 1.0.10 supports resource forks, there is what we hope is a one-time conflict dance as different versions see existing files with resource forks as different from one another. That has resulted in a ton of extra files in our shared Dropbox folders, all with “So-and-so’s conflicted copy” in the filename. As far as we’ve been able to tell, these files are identical to their originals and can be deleted easily by searching for “conflicted copy” in the filename, but none of the file formats that we’re using rely on resource forks. Be more careful with files that do store important data in the resource fork.

Dropbox 1.0.10 is a 21.5 MB download, and requires Mac OS X 10.4 Tiger or later. Dropbox remains free for 2 GB of space; upgrading to 50 GB costs $9.99 per month, and 100 GB is $19.99 per month. Mobile versions of Dropbox are available for iPhone, iPad, Android, and BlackBerry, and numerous other developers have integrated support for Dropbox into their apps.