Citing over 1,000 apps at launch, Apple has thrown back the curtains on the Mac App Store, releasing it as the primary aspect of the Mac OS X 10.6.6 update. Like the iOS App Store, the Mac App Store presents an easily parsed interface for finding and viewing information about apps. 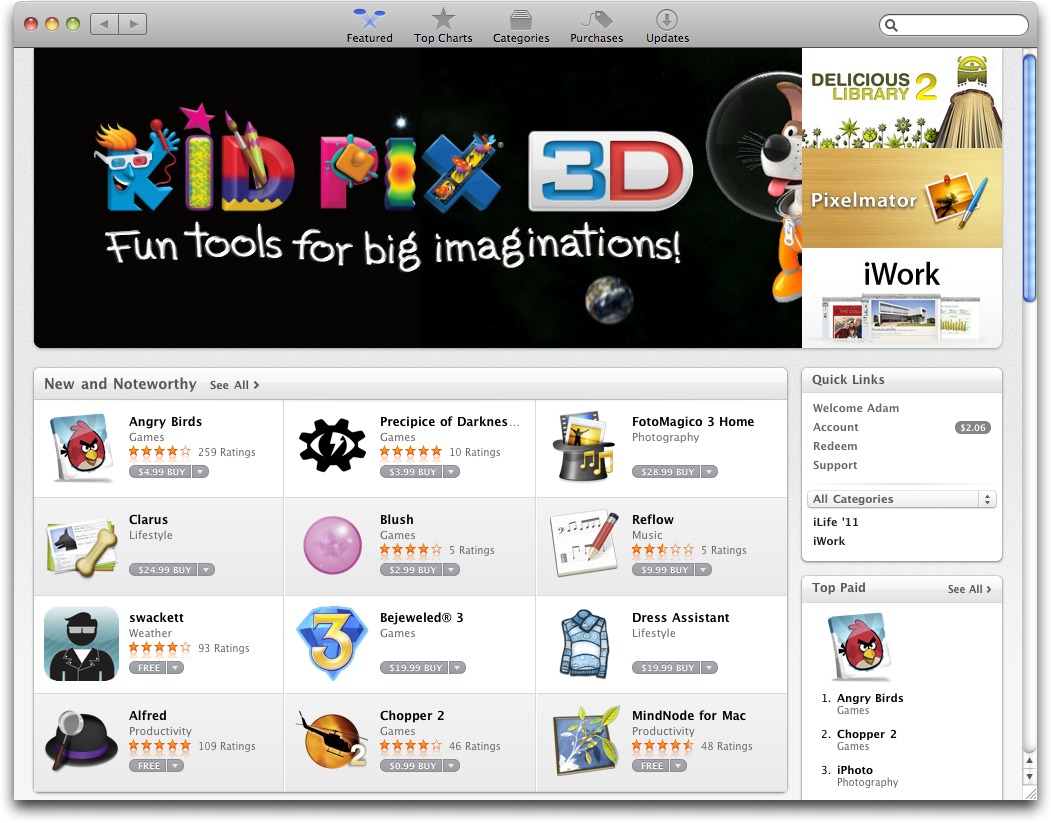 A single click purchases a paid app (or gets a free app), causing its icon to fly into your Dock and show a progress bar while the app downloads to your Applications folder. All downloaded apps add their icons to your Dock, but you can of course drag their icons off. Looking forward, the App Store app on your Mac will provide updates as they’re approved by Apple.

Apple has announced that the Mac App Store served over 1 million downloads in its first day; the numbers have undoubtedly continued to climb, and I expect we’ll see more crowing from Apple as the Mac App Store achieves future milestones.

Look, Feel, Shop — Although the public face of the Mac App Store is a small application called App Store, Apple did integrate the Mac App Store deeply into Mac OS X. Along with the animation that causes icons of purchased apps to fly into the Dock and show an animated download progress bar, there’s a new App Store menu item in the Apple menu, and the dialog that appears when you double-click an unknown document type offers to let you search the Mac App Store. There are also various new frameworks and internal OS support for developers.

The App Store application itself is essentially a Web browser, displaying the Mac App Store interface just as iTunes displays the iTunes Store and App Store for iOS devices. That makes sense, of course, since the Mac App Store will change constantly, but what’s unfortunate is that it’s a mediocre Web browser, offering only Back, Forward, and Search controls, along with five hard-coded buttons (and associated menu items, but no keyboard shortcuts) for Featured, Top Charts, Categories, Purchases, and Updates.
Wouldn’t it be nice to have tabbed browsing, though, so you could Command-click multiple items in the Mac App Store to open them in separate tabs, and then flip back and forth quickly to compare? 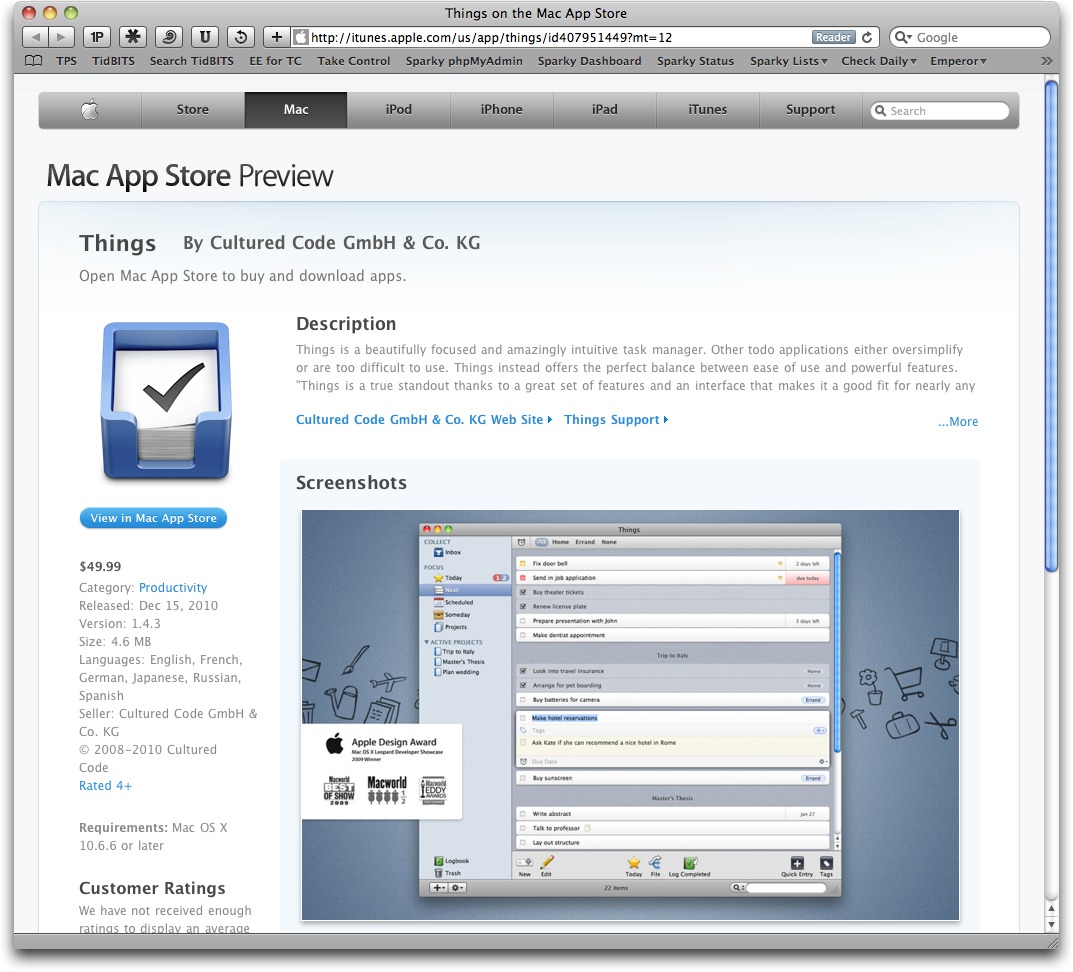 Existing Apps — So what happens if you already own a copy of an app in the Mac App Store? One of two things. First, if the version of the application on your hard disk matches the version of the app in the Mac App Store exactly, the button showing the price will instead read Installed, and you won’t be able to buy it. That makes sense, since Apple doesn’t want the customer service load of people accidentally buying applications they already own. Applications that fell into this category for me included BBEdit, Transmit, and Things, along with Keynote, Pages, and Numbers from iWork ’09.

Unfortunately, the side effect of this is that developers are now hearing from existing customers who think an Installed badge means the application is fully integrated with the Mac App Store, which isn’t true. For instance, you can’t rate an application you bought outside of the Mac App Store, which seems like an oversight Apple should fix—if you own an app, you should be able to rate it. More notably, what won’t be happening, according to a number of developers I talked with on Twitter, is that previously installed and subsequently recognized apps will not seen as purchased by the App Store application, and thus won’t be eligible for updates through the Mac App Store.

More common will be the situation of having an older version of an application on your hard disk than is in the Mac App Store, since many developers will have created updates specifically for the Mac App Store. I own Fetch 5.6, but the version that Jim Matthews of Fetch Softworks submitted to the Mac App Store identifies itself as 5.6.3, and thus isn’t identified as being installed.

In that situation, you can still purchase the application (or download it, if it’s free), and it will silently replace the existing file in your Applications folder. I verified this by downloading the free Garmin Training Center app and watching it replace my older version. With free apps, this is probably desirable, since now the Mac App Store will manage updates for Garmin Training Center for me. With paid apps, though, you’ll want to be careful to avoid buying what you already own.

If you have questions about how the Mac App Store relates to existing applications, give Macworld’s FAQ a look—it covers all the basics.

Pricing and Speculation — Many iOS apps are priced at $0.99 or $1.99, and although some iOS apps have aimed for higher price points, there has been much discussion about whether the App Store has driven prices so low that only extremely popular apps can sell enough to cover development costs.

That same concern has been floated with regard to the Mac App Store, but some initial analysis by Richard Gaywood for TUAW would seem to show that a large percentage of apps are priced between $10 and $50, matching their existing price points outside the Mac App Store. Less common are apps priced above $50, and even fewer are priced above $100, also matching existing pricing structures. Instead, the other large chunk of apps is priced under $5; lots of those are games ported from iOS.

Although many long-time Mac developers are jumping into the Mac App Store (the oldest app there would appear to be Fetch, which first shipped in 1989, followed by BBEdit, PCalc, and StuffIt Expander in 1992), most appear to be doing so with justified caution. There are exceptions—the Pixelmator team has announced that it will be moving all sales and distribution there in the next few months, and Sophiestication’s CoverSutra is now available solely through the Mac App Store. And I’m sure that many iOS developers see the Mac App Store as an extension of what they’re already doing in the iOS App Store, and see no reason to establish their own online store.

There’s no question that the Mac App Store offers significant benefits to users and developers alike, including improved discovery of new apps, easy installation, automatic updates, re-downloads when setting up new Macs, and elimination of serial numbers. And unlike the iOS App Store, developers aren’t locked into it, so there will be much less consternation over Apple’s approval policies.

But downsides remain, beyond the 30-percent transaction fee that Apple takes. Most concerning to developers is that Apple owns all the customers, so as a developer, you have no connection with the people who have purchased your product. That’s a concern for marketing in the future, of course, but it will also make product support more difficult. Expect to see a lot of apps in the Mac App Store asking you to register with the company in some form or fashion. There’s also currently no way to provide discounted upgrade pricing for major new releases, something that’s standard in the software world.

And of course, many useful and popular applications can’t be sold through the Mac App Store at all because of Apple’s restrictions. Apple won’t accept apps that install resources into the OS (the version of BBEdit available from the Mac App Store doesn’t install command-line tools, for instance), or that need to run as the root user (like the backup program SuperDuper or the firewall software Little Snitch). Apple’s restrictions also eliminate all system preference panes, screen savers, and other utilities that aren’t implemented as standard applications.

Despite these problems, I think the Mac App Store is a good thing, and I believe it will become the primary way that Mac users acquire standard Mac applications. That’s in large part because Apple’s Mac sales are way out of proportion to the sales of any Mac developers I know—it’s clear that most Mac purchasers simply aren’t buying software. But the success of the iOS App Store shows that vast numbers of people will buy when Apple reduces friction in the process. In the end, the Mac App Store is grease for software sales.

Comments About Peering Behind the Mac App Store Counter