An update to the $0.99 iOS GadgetTrak theft-recovery app lets you snap a picture of a miscreant who has possession of your device. The 2.5 release, coming a month after the 2.0 update that added background location tracking, also offers a push notification feature that can fool thieves into revealing themselves. (See “GadgetTrak for iOS Adds Background Location Updates,” 27 December 2010.)

Photos are snapped through both front-facing and rear-facing cameras whenever tracking is enabled via your account at GadgetTrak’s Web site and the app is launched. As GadgetTrak explained to me in a briefing at Macworld 2011, the company now sends a push notification which, if opened, launches the app and takes the picture. If the phone is on a network, the picture is then transmitted.

While a thief might seem to have to be stupid to open a push notification, it’s second nature for some people to tap, and the message tries to entice them. Further, GadgetTrak noted that if the phone is locked and the push notification comes through, swiping to unlock the phone will launch the app and take the pictures. Photos are sent via email along with other tracking information. 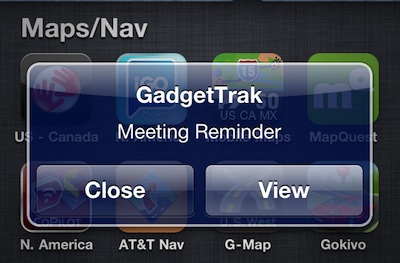 GadgetTrak also explained a mystery that I noted in my previous article about the 2.0 release: how the program continues to track even if you use the force kill method in the app tray. (Double-press the home button, then hold down on the icon. An X appears in each icon’s upper-left corner. Tap the icon to kill the app.)

Every app that uses background features registers with iOS when it is installed, not just when it launches. The iOS background location manager then sends events to these apps, even if the foreground part isn’t running. It’s the equivalent of an extension to the system without all the ugliness that used to entail in old versions of Mac OS.

The new features make it much more likely that a stolen phone will reveal details useful to law enforcement in tracking down the phone, and charging a ne’er-do-well. If only Apple had installed GadgetTrak on the leaked iPhone 4 prototype!