Imagine my surprise when I received personal email from someone at Rupert Murdoch’s just-announced iPad app and national news publication, The Daily, encouraging me to post “info, images, video, and more” from their news release. Those who aren’t interested in the inside baseball of new publishing ventures probably missed or ignored the announcement—after all, we’re talking about just another iPad news app, which isn’t exactly news beyond the publishing industry.

So why am I telling you about it? A few reasons. The most overarching reason is that the iPad has been hailed by some as the savior of the publishing industry. That hasn’t happened so far, with high-profile magazine apps from the likes of Wired seeing initial interest (100,000 app sales of the first edition) followed by rapidly declining sales (down to 20,000 after a few months). And Wired has been the most successful. Other magazine apps, such as GQ, are being largely ignored, according to some reports selling only a few hundred copies per issue. (Per-issue cost, lack of in-app subscriptions, lack of availability to existing subscribers, and poor usability have all factored into the weak showing so far.)

Also, in this celebrity-focused age, any move by a billionaire must be interesting, no? News Corporation’s Rupert Murdoch is one of the richest and most influential men in the world, and he has nearly 60 years of experience in publishing. So if he’s willing to dump $30 million into development and $500,000 per week into publishing The Daily (according to the New York Times), it’s interesting, if only because it can’t possibly make money for some time. After all, there are only 15 million iPads out there, and, receiving $0.70 from Apple of the $0.99 per week that The Daily charges, it will have to reach 715,000 users—more than seven times as many as
bought that first Wired app—just to break even on operating costs. (The Daily also accepts advertising, but that isn’t expected to be the bulk of revenue at first.)

Finally, with a few exceptions, The Daily has a business model that hasn’t been available to other publishers selling in the App Store, a recurring subscription that costs $0.99 per week or $39.99 per year. (The Wall Street Journal, another News Corp. publication, is one of the exceptions.) Steve Jobs has reportedly taken a keen personal interest in The Daily, making numerous appearances at The Daily’s Manhattan offices, and it was reported before he took medical leave that he was slated to appear on stage with Murdoch at the launch. It remains to be seen if other publications without billionaire backing will ever receive similar treatment from Apple.

So, a whizzy new iPad app, funded by the deep pockets of a publishing magnate, with Apple’s direct involvement—what’s not to like? Lots.

On the technical side, The Daily is just another news app, and it doesn’t break any significant new ground (or work on the iPhone or iPod touch, boo!). Yes, it has a Cover Flow-like browsing interface, and articles can include “interactive” elements like galleries, videos, animations, 360-degree photos, and hotspots you can tap for more info. It even has crossword puzzles and Sudoku games, and if you navigate to those pages, you’re nagged to sign into Game Center so you can “play” with other people. 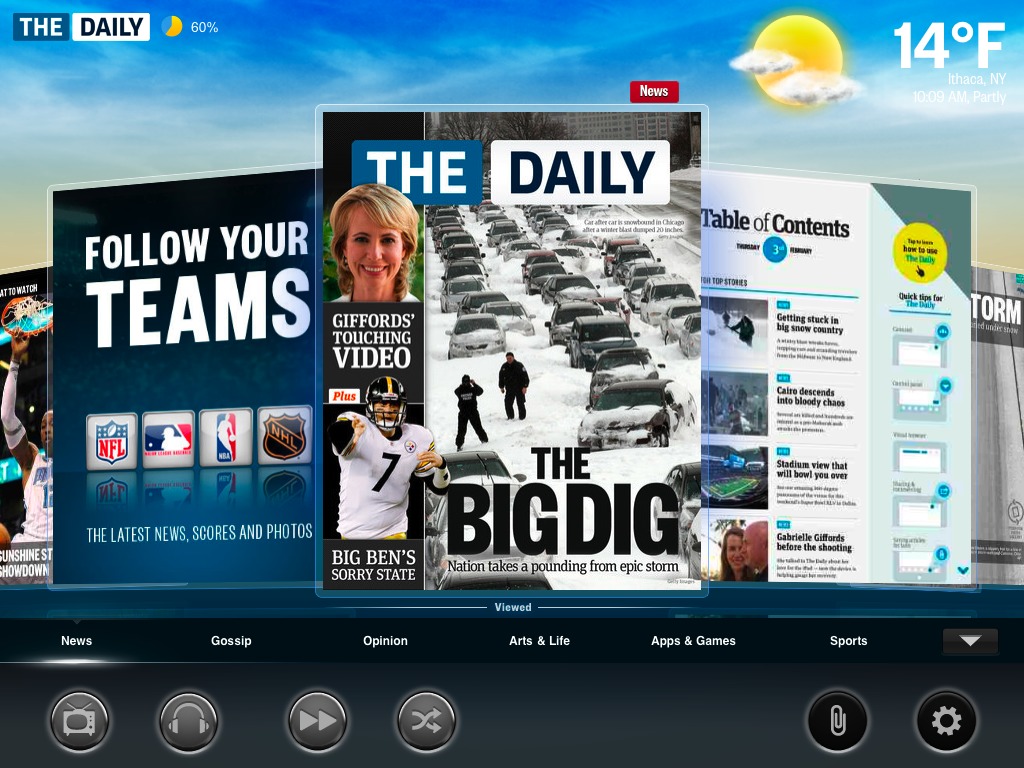 The Daily demos well, but will it prove to be easy to use over time? The promotional video spends most of its time explaining how to navigate in the app. This is a problem shared by all iPad news apps; during a recent talk at Macworld Expo, Colin Crawford of Media7 Consultancy showed a slide comparing the wildly varying navigational help screens of a number of different apps. At the moment, we simply lack navigational conventions for news apps, and until they
arise, readers may feel uncomfortable and stay away.

My initial foray into The Daily was tremendously frustrating, with slow swipe responses, and a long waiting period when the app downloads the day’s contents (before anything is available to read, and also when skipping to internal sections before the entire issue has arrived). At least once, I had to force quit the app to get it to bring in a new issue, and it has crashed several times. Many of my taps were ignored, in some cases due to very small hotspots (tap the tiny blue buttons!), and, in others, because of icons (like the right pointing arrow) that did nothing. Furthermore, having my navigation interrupted by ads proved not just irritating but also confusing, since the interruption broke navigation continuity (in which you
arrive at the spot you’re expecting).

Some content in The Daily can’t be viewed in certain orientations, but the only hint you get—if you get one at all—when this happens is a tiny notification in the corner that says “Turn to see story.” And some articles scroll left-to-right, whereas a few pages scroll top-to-bottom. Lastly, and I expect this sort of mistake will be worked out, I quickly found pages that were just random. 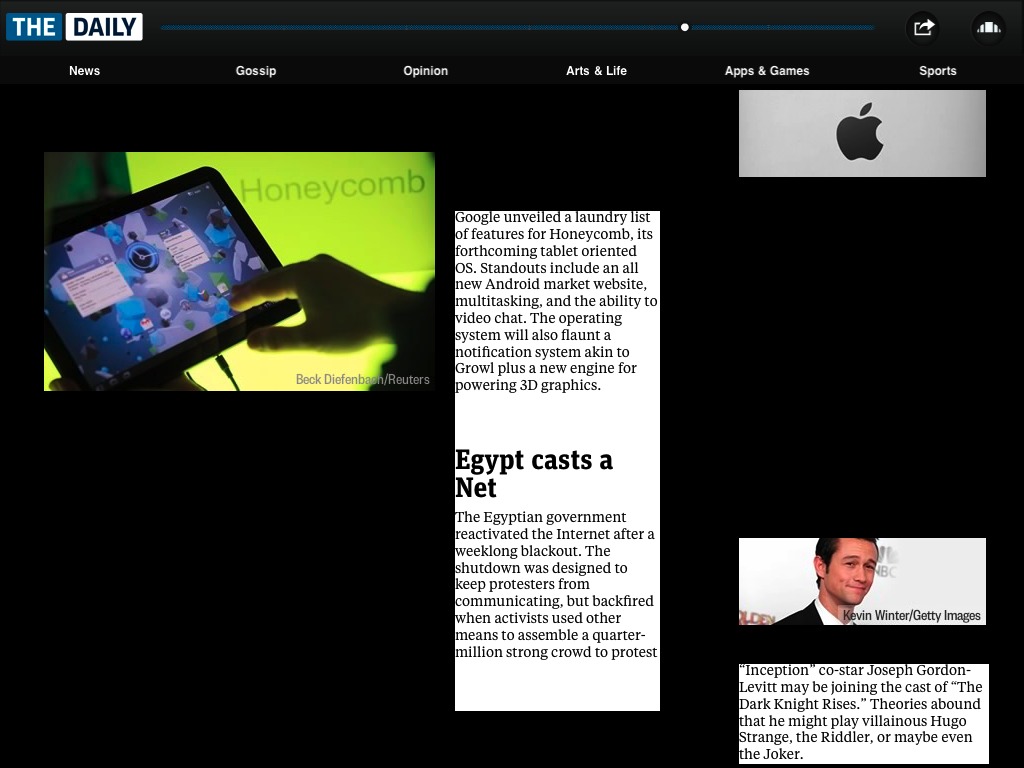 On the plus side, the layout strikes me as attractive and well-suited to the iPad screen, the photos are striking, and the overall font choices work well.

Nonetheless, The Daily’s deep pockets will raise the bar for all other iPad publishing ventures. It’s certainly not a bad thing to advance the state of the art, but to do so with a massive loss leader in a field where news apps have already lost vast amounts of money smacks of trying to spend the competition into the ground, much as the United States’s 1980s military spending helped bankrupt the Soviet Union.

Of more concern is the content side. Regardless of the underlying technology, The Daily will succeed or fail based on whether or not it provides compelling content. Right now, it appears to have the sensibility of a tabloid in the skin of a news magazine, making Gossip not just one of the top six sections, but the second item after News. One of your few customization options is setting your horoscope sign—do people who own iPads really ever read horoscopes? Articles in the issues I’ve read have been short, never going beyond two iPad screens of text. It’s hard to see such an emphasis on the frivolous changing the world of journalism, at least for the better.

The Daily has been compared to USA Today, which made a splash when it debuted in 1982 with its challenges to the traditional newspaper model. The comparison may or may not prove accurate, but what The Daily won’t compete with are local newspapers. It doesn’t appear that there will be any local news, which is one of the main things that draws people to a newspaper—they want to find out what’s happening in their own community, from the viewpoint of others who have a stake in local events.

The Daily does ask for your location, which it uses for weather forecasts, something done far better by specific apps (see “WeatherBug Elite 1.0,” 4 March 2010). You can also customize the Sports section with your favorite teams—from professional baseball, basketball, football, and hockey only—which adds a screen showing some recent results and headlines. Sports other than those four aren’t represented, and your settings don’t appear to change the pre-programmed content.

Pulling back even further, there’s not much wrong with The Daily if you think about it as just another random news app on the iPad. What does feel wrong, however, is that it has been presented as the Next Big Thing, and that such a large amount of effort and money has gone into creating it. To be worthy of the attention of millions of eyeballs every day, The Daily ought to transcend the digital magazine model and acknowledge notable trends in how people like to read news in the age of the Internet.

First, the concept of getting all one’s news from a single source has largely fallen by the wayside. A vast amount of news traffic today is link driven, with a particular article gaining attention for some reason, drawing tens or hundreds of thousands of visitors. But those people come for the article, not the publication, and they don’t stay to become loyal readers. We see this sort of temporary traffic spike all the time with TidBITS, when one of our articles is featured on Daring Fireball or Slashdot. There’s no question that this trend is a huge threat to publication business models, but The Daily isn’t the solution—or even a solution.

Second, link-driven traffic stems not just from aggregation sites like those I mentioned, but from social sharing. Whether via email, Twitter, or Facebook, many of us read news because it has been recommended to us by someone in our social network. The Daily does allow outgoing social recommendations from within the app, but doesn’t integrate recommended content in any way, as does the Flipboard app. That’s troublesome because part of the appeal of recommended links from friends is that they emanate from all over the Web, with a wide variety of points of view and voices. No publication can be all things to all people, and yet, The Daily seems to be trying to do
just that.

Third and finally, with its single voice, The Daily completely ignores the democratization of content brought about by the rise of the Internet. Completely missing, for instance, is the work of small professional publications and bloggers, who may not be able to reach massive audiences on an individual basis, but who, in aggregate, have completely changed the journalistic playing field.

In the end, The Daily feels like just another swing at defining what an iPad news app can do, with few new ideas and mediocre usability. With shallow, wide content from a single source, it ignores the way journalism and reading has changed in the age of the Internet. It’s a pretty digital face on a publishing approach from the 1980s.

And honestly, it’s a shame. With $30 million and a direct line to Steve Jobs, The Daily could have been vastly more interesting had it provided a subscription-fueled way of disseminating the kinds of content we already read, hear, and watch in ways that enhance how we all interact on the Internet today.

Comments About Why The Daily Is So Yesterday