When the upper echelons at TidBITS Command Central were asked by Mobee Technology if TidBITS was interested in reviewing the new Mobee Magic Charger, I was given the assignment: I had recently reviewed Apple’s Battery Charger (see “Apple Battery Charger and the Secret of NiMH,” 13 October 2010), and by virtue of that had become the staff’s de facto rechargeable battery expert. Besides, they figured I’d get a charge out of it. (Come on, people, it’s just a pun—put down the pitchforks and torches!) 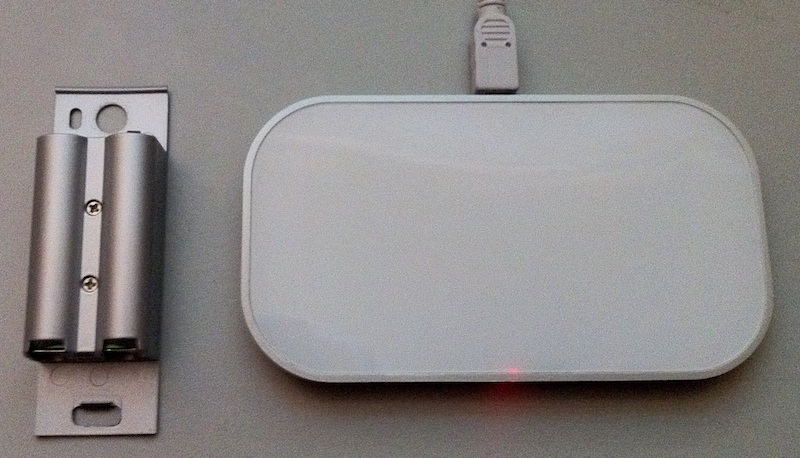 The package I received a few days later contained an attractive black box, nestled within which was one battery pack, a charging base station, and a mini-USB cable, along with a set of instructions consisting of four pictures and five words. That last, by the way, is not really a criticism; I didn’t need any more guidance than that to set up the Mobee Magic Charger and try it out.

What It Is — The Mobee Magic Charger is meant to replace the batteries in an Apple Magic Mouse and to do away with the need for replacing them periodically with a freshly charged set. Instead, when set up properly, the Magic Charger keeps the Magic Mouse charged as long as you periodically rest the mouse atop the charging base station. It does this through the magic of inductive charging, a technique that goes back to the early experiments of Michael Faraday with electromagnetic coils.

The first component, the battery pack, replaces both the batteries in the Magic Mouse and the cover plate that holds them in place (note: you might want to keep the original cover plate somewhere safe in the event you need to revert to the use of ordinary batteries on a trip, for instance). The second component, the charging base station, is an aluminum and white pad, scarcely larger in footprint than the Magic Mouse itself and designed to harmonize with the Magic Mouse’s appearance. The base station, in turn, is connected either to a powered USB port on your Mac or to an external powered USB hub with the third component in the box: a white USB cable with a mini-USB plug on one end that attaches to the base station, and with a regular
USB plug on the other end.

When the base station is connected to an appropriately powered USB port, the single status light on the front of the base station glows steadily red. When a Magic Mouse with its battery pack rests on top of the base station, the same light blinks green. When the battery pack in the Magic Mouse is completely charged, the light glows steadily green. And if something goes wrong, the light blinks red—at least, that’s what the instructions imply; I haven’t seen any blinking red lights in the several weeks since I started using the Mobee Magic Charger.

(And what, you may wonder, is an “inappropriate” USB port? It’s one that doesn’t supply the standard 500mA of power that the USB-2 specification dictates for powered USB ports: the ports on a wired Apple keyboard, for example, are low-power USB ports that don’t supply the necessary power. On the other hand, the USB ports on a MacBook or on the back of any iMac are fine, as are external USB hubs with their own power supplies, and ports on a Mac Pro or a Mac mini: I’ve used the charger both with my iMac’s rear USB ports and with an external powered hub and have seen no difference in performance.)

Testing It Out — The evening I received the Magic Charger, I unboxed it, plugged in the base station, and rested the naked battery pack on it so that it could charge overnight. The status light blinked green throughout the evening, but the next morning I was greeted by a steady green glow. (I later found out that although the batteries inside the battery pack are nickel-metal hydride (NiMH) batteries, they are not of the low self-discharge (LSD) variety, so it isn’t surprising that the battery pack arrived more or less discharged.)

The next morning I removed the batteries from my Magic Mouse and replaced them with the Magic Charger battery pack. It was a perfect fit, and the pack snapped into place with no difficulty. Nor did the Magic Mouse feel different with the battery pack than it did before: if there is a weight difference between the pack and normal batteries, it isn’t a noticeable one.

With the charged pack in place, I put the base station aside to see how long I could run the Magic Mouse on a single charge. The specifications for the Magic Charger say that the pack can deliver six days of “autonomy”; that means, I was told by a company representative, that it can run a Magic Mouse for six days under normal use before the battery pack runs dry. That’s quite a bit less, by the way, than normal alkaline batteries last (about 6 to 10 weeks in my experience) and also less than Apple’s own rechargeable batteries (about 3.5 weeks).

This test revealed that the six day estimate is slightly conservative: I was able to run the Magic Mouse for about seven full days of reasonably heavy use before I saw the ominous low power warning appear on my iMac’s screen. The discharge curve of the battery pack, by the way, is typical of NiMH battery behavior: a somewhat steep initial discharge followed by a slow decline that is climaxed by a final, precipitous drop. On the morning of the seventh day of my test the battery pack still had 43 percent of a full charge, but by that evening it had dropped into the danger zone with only 18 percent left.

My next test was to use the Magic Charger more normally for a week. That is, at the end of each day I simply put the Magic Mouse on top of the charging station and put my iMac to sleep. Over that week, the iMac never reported the Magic Mouse with a charge lower than 62 percent.

Power Consumption and Life Cycle — Although the Magic Charger requires a powered USB port that delivers 500mA, it actually consumes only slightly more than half of that when charging: about 270mA. When on standby, which it is most of the time, the power drain is only about 15mA. A full battery charge cycle, from completely drained to full (which, again typical of NiMH batteries, shows up on the iMac as only about 80 percent of a full charge), takes about six hours.

The battery pack itself is rated for a lifetime of 500 cycles: that is, from completely charged to completely discharged. Recharging an already partially charged battery pack constitutes only part of a charging cycle. Based upon the six-to-seven-day capacity of the battery pack that I found in my tests, I figure that 500 cycles is roughly equivalent to just under nine years of useful life—adequate by most reasonable standards, seeing as how I haven’t had a mouse itself last that long in recent years.

Bottom Line — If you have a Magic Mouse, a spare powered USB port, and the minimal desk space required for the base station, the $49.90 Magic Charger seems like a good investment.

Here’s my back-of-the-envelope calculation: Assuming that one would go through normal alkaline batteries in a Magic Mouse at a rate of roughly 10 per year, and with an average cost of $0.75 per battery (yes, you can get them for less, but you usually get what you pay for), you’d end up spending about $66 for replaceable batteries during a Magic Charger’s estimated lifetime. Naturally, your mileage may vary, but the cost of the charger is certainly comparable to the cost of batteries à la carte, and the convenience of never having to swap batteries again is definitely attractive.

Besides, it’s magic! Who can put a price on that?