Two-dimensional tags that provide a URL, address card, location coordinates, or plain text can now be easily decoded under Mac OS X with the new QuickMark release. The $2.99 QuickMark reads standard 2D codes (QR Code and Data Matrix) as well as its own format, also called QuickMark. These codes are increasingly found in newspapers, magazines, advertisements, and physical goods sold at retail. (We even provide QR codes at the bottom of each TidBITS article to let you transfer the URL between devices to continue reading; see “Tag, You’re in 2D!,” 1 October 2009.) 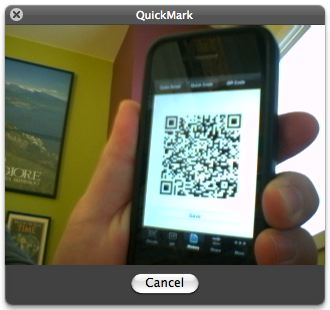 QuickMark’s eponymous Mac program, available through the Mac App Store, has three functions. It can use a camera (built-in iSight or FaceTime, or third-party) to recognize and carry out an action on a 2D tag. This includes opening a URL in a browser, switching to Skype for a phone call or to send an SMS, or using Google Maps via a browser to display a location. It can also take text you enter and produce a 2D code in any of the formats it reads. Finally, you can drag an image into the scanning window or select an
image from a menu, and QuickMark will decode any 2D tag that the image contains. The Mac app cannot read 1D barcodes, such as the kind used for ISBNs on books. 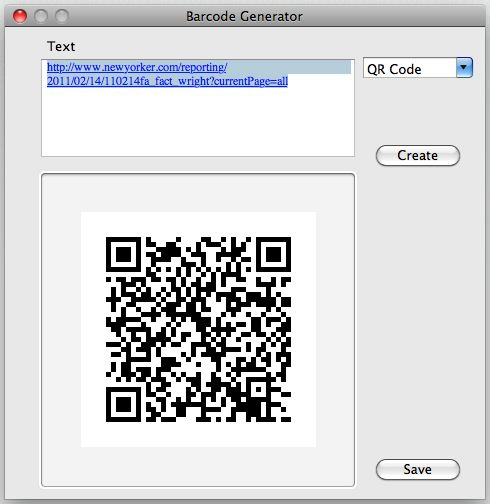 I have been using QuickMark’s $0.99 iOS app for some time quite happily on my iPhone for 2D code scanning and creation. The codes were put into wide use in Japan nearly a decade ago in a partnership between mobile phone companies, handset makers, advertisers, and publishers. They have finally taken off in the United States: there’s not a day that goes by that I don’t see several prominently displayed in store windows, see them in
newspaper and magazine ads, or note them on Web sites I visit. I even received an ad flyer yesterday in the snail mail that had a code on it. (The iOS app can read 1D codes.)

The Mac version unfortunately shows the developers’ lack of familiarity with Mac OS X: you cannot paste into the text field for creating a 2D tag, and, for that matter, it lacks copy and paste commands entirely. You can type in text, or drag text from a browser address bar into the text field. But these limitations should be easy to fix, and I’m sure user feedback will help QuickMark improve.

Comments About QuickMark Brings 2D Codes to the Mac